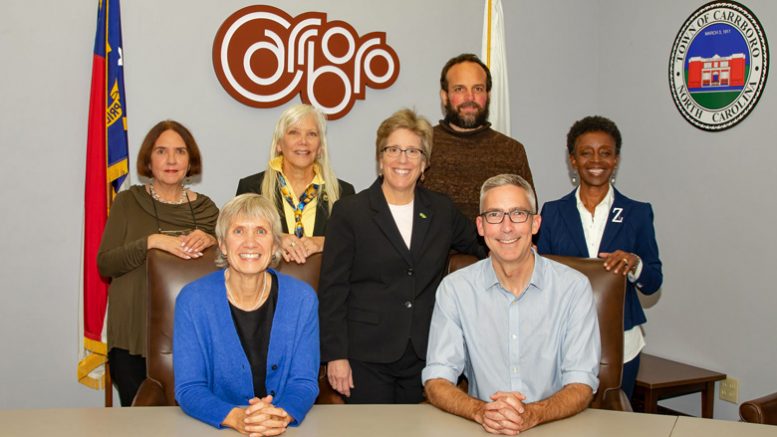 Carrboro moved closer toward reparations for Black residents last week when its town council approved a resolution that lays out next steps along the path to making amends for hundreds of years of injustice.

The council (minus member Jackie Gist, who was out sick) unanimously passed a reparations resolution at its Oct. 20 meeting. The resolution acknowledges that “systemic racism was created centuries ago and will take time to dismantle.”

The main action item in the document was to establish a commission within the year to make recommendations in the short, medium and long term “that will make significant progress toward repairing the damage caused by public and private systemic racism.”

Council member Barbara Foushee clarified the council’s vision for reparations: “Reparations is not about giving anyone a handout or a check; it’s about community change,” she explained.

Foushee and Mayor Lydia Lavelle wrote the resolution, and council member Susan Romaine added her edits. Other council members chimed in with tweaks at the meeting.

The document asks for state funding for reparations at the local level and for the federal government to take actions to eliminate the racial wealth gap, including providing a universal basic income and raising the minimum wage to $15 an hour.

The town is limited in what it can do by itself, council member Damon Seils said. “Systemic, large-scale amends for damage requires participation at the federal level.”

And money, Foushee added. She requested that the town manager work racial equity funding into the town budget. Whatever direction the council decides to go in, she said, funding will be critical to success.

After discussion, council members decided the commission should be empowered to collect information and engage local residents by holding community conversations.

Some council members said they would like to see the commission form right away, not a year from now. Romaine suggested officially launching the commission on Juneteenth 2021.

Foushee said she also would like to see it happen sooner, but that all of the extra work in the past year — the mural, the public safety task force, the extra precautions due to the pandemic — have stretched staff quite thin. She and council member Randee Haven-O’Donnell volunteered to work with town manager David Andrews and race and equity officer Anita Jones-McNair on developing the charge for the commission.

Andrews agreed to give twice-yearly progress updates on the commission and related projects.

Be the first to comment on "Carrboro Moves Ahead on Reparations"