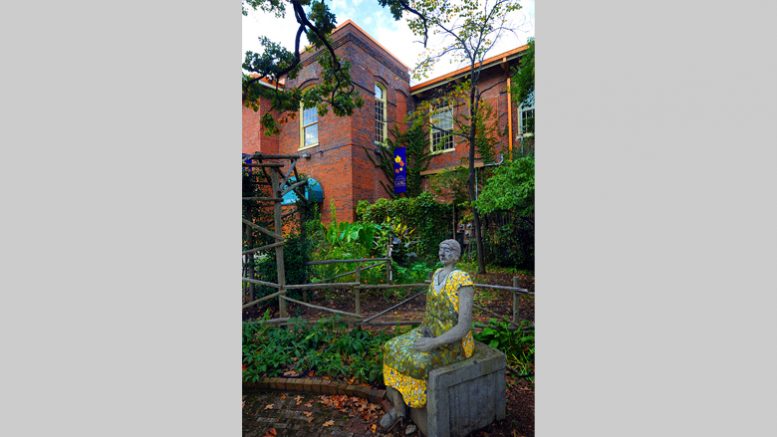 Carr Mill Mall, in the heart of Carrboro, NC, was named for Julian Carr. The mall was a former cotton mill. Carr bought it in 1914, donated electricity to the community, and in honor and thanks the town changed its name from West End to Carrboro. But it’s not all good — in the Jim Crow era, Carr also played an essential role in sustaining white supremacy in North Carolina. Yet, as philosopher Marcus Aurelius reminds us: “The best revenge is to be unlike him who performed the injury.” Carrboro takes that advice to a whole new level.

The history of Carr Mill Mall parallels the history of both Chapel Hill and Carrboro. It remained operational until the early 1960s, and in 1975 the community appealed for its restoration. After a petition, two years of work, and $8.5 million, the mill re-opened its doors in 1977, as Carr Mill Mall.

​Over the years, Carr Mill Mall has expanded to include Weaver Street Market, a community owned and operated natural foods store and café, with two floors of office space above it. The lawn in front has become known as Carrboro’s front yard, and a courtyard has been added on the Greensboro Street side. Carrboro resident Bruce Thomas, also known as “Dancing Bruce,” practicing his headstand on a bench in the Weaver Street lawn.

“Although the charming college town of Chapel Hill is more buttoned-up than its free-spirited neighbor, Carrboro, both towns share a love of live music, a range of new drinking spots, and sophisticated dining options that belie the area’s youthful atmosphere. Together, this intertwined pair is growing up right.”

“During the late 1960s, Carrboro began to become more progressive in its thinking. Today the town has a reputation as one of the most progressive communities in the South.”

In keeping with white supremacy movements in North Carolina at the turn of the twentieth century, Julian Carr defended the institution of slavery, claiming it had been beneficial to the enslaved, and argued for denying full citizenship rights to African Americans. Speaking in June 1913 at the dedication of the “Silent Sam” confederate monument at UNC, Carr remarked that Confederate soldiers had “saved the very life of the Anglo Saxon race in the South.” He went on to proclaim that he had “horse-whipped a negro wench until her skirts hung in shreds” following the war because she had insulted a white woman. The Southern Historical Collection at UNC-Chapel Hill has digitized many of Carr’s speeches.

The Carrboro of today is the last town in North Carolina Julian Carr would want to be named for.

Tofu, organic beans, a Lesbian Mayor, loud rock and rollers, granola crunch, and plenty of CBD Oil, Carrboro is a town that was the first in the Tar Heel state to elect a gay mayor and who’s current mayor is lesbian. Today, Carrboro’s elected body fights for and honors its working-class roots while reaching toward the goals of social equity, environmental harmony, and affordable housing. Carrboro was the site for the first post-Civil War African American School, the Quaker School for Freedmen. It’s been well over a century since the late great Elizabeth “Libba” Cotten was born in what is now Carrboro, but you can still find traces of the Piedmont blues legend’s wonder years in her old hometown

From a robust modern hula-hooping movement to the Cat’s Cradle, a venue which has hosted music giants such as Joan Baez, John Mayer, and even Nirvana, in today’s Carrboro anything goes – just no hate. No hate at all. Today Carr Mill Mall, like all businesses in the COVID-19 Pandemic is working hard to welcome visitors and all shoppers, safely, while promoting unique stores such as:

You’ve Seen the Play. Now Watch the Movie and Buy the Book.

Be the first to comment on "Carrboro, North Carolina"