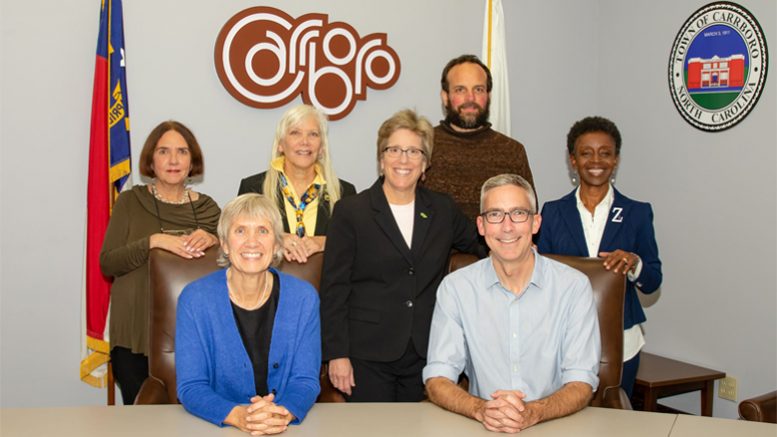 The agenda item on Carrboro Town Council’s Sept. 2 meeting called for a discussion on tree distribution disparity in historically Black neighborhoods, perhaps as a way to tiptoe in to the topic of reparations. But the council never got to the trees.

And when it comes to reparations, Council Member Barbara Foushee said, a dollar amount is irrelevant.

“A dollar amount can’t replace the hundreds of years of bondage, torture, rape, separation of families. This is a debt that can never — do you hear me? — never be repaid,” she said.

The theme throughout the meeting seemed to be whether Carrboro was ready to walk the walk of reversing racial inequity, not just talk the talk.

The evening began with a somewhat heated discussion about whether to hold off making appointments to advisory boards because there were no Black applicants in the pools. Council members tabled making all but a few appointments, but they didn’t come up with a plan for recruiting people of color.

Feathers had not been smoothed completely when council took up the next item, an update on a mural to take a stand against racial injustice — where it should go, what it should look like and what it should say.

Was “Black Lives Matter” too political or polarizing? Was “End Racism Now” specific enough? Should it be upright on a wall at one of the gateways into town, even if that meant slowing down implementation to get NCDOT approval? Should it be painted on the street, subject to being walked on or driven over and where NCDOT would limit colors, such as yellow? What about in a parking lot?

Staff will continue to research.

On to the idea of linking the town’s name with a different Carr than the white supremacist and KKK member Julian.

All this primed council for the next item: A Discussion About Reparations, Including Disproportionality of Trees in BIPOC [Black, Indigenous, people of color] Neighborhoods in Carrboro.

Anita Jones-McNair, the town’s race and equity officer, had compiled examples of how other towns had addressed reparations. Some had dedicated revenue streams to fund programs and services that benefited Black residents in particular. However, as Council Member Damon Seils pointed out, N.C. law prohibits any municipality changing how its tax revenue is distributed, and tax revenue is, for all practical purposes, the only money that funds local government.

Council Member Jackie Gist related her understanding that Carrboro’s elected officials in the 1960s had rezoned historically Black neighborhoods from residential to commercial property, and the spike in property taxes forced many homeowners to sell and move elsewhere.

Seils said a next step might be to make explicit how zoning decides who gets to live in Carrboro. “The zoning decisions we make today have implications about what kind of housing is built and who has access to it,” he said.

Foushee underscored the impact of centuries of white supremacy on Black lives today.

“People say, ‘Slavery was so long ago,’ or ‘My people didn’t own slaves,’” she said. “But the key thing to understand is that the unpaid labor of millions and the legacy of slavery — Jim Crow laws, discrimination in mortgage lending and a race-based system of mass incarceration — created uncompensated wealth for individuals and white society as a whole. Immigrants of European ancestry directly and indirectly benefited from this system of white supremacy. The past is very much in the present.”

Council continued to bat around ideas, including finding a good general definition of reparations. Some towns had invested in workforce development, entrepreneurship, homeownership, education and community infrastructure as a means of reparations.

But the first step is to acknowledge the harm done, Foushee said. “Acknowledgement is key. It needs to be put out there ahead of anything else we do.”

As the scheduled end time of the meeting had already come and gone, council members decided they needed to devote a work session solely to this topic. Town staff will find a date in the near future.