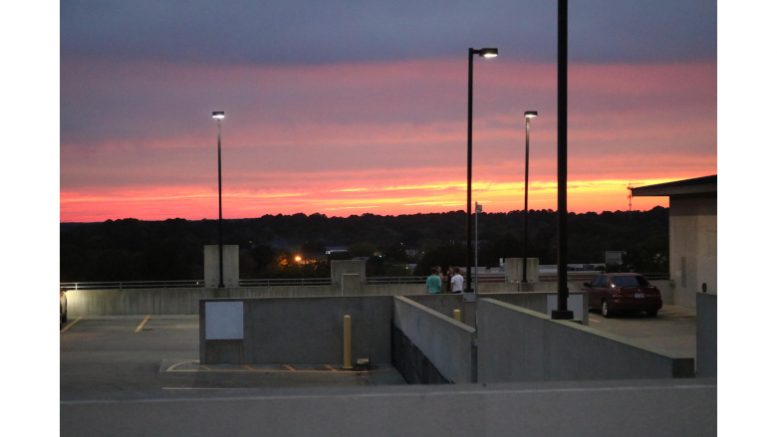 The parking garage at 300 East Main St. in Carrboro has proven to be a unique gathering spot for teens to socialize. Photo by Lola Oliverio.

Growing up in Carrboro, I can’t remember the first time I hung out with friends at the 300 East Main Street parking deck next to the ArtsCenter. It’s been the go-to spot throughout my high school experience, and I’ve made countless memories there.

To most, the structure is a place to store your car while you attend a concert at the Cat’s Cradle or enjoy a meal at Hickory Tavern. To many youth of the Chapel Hill-Carrboro area, however, it’s the meeting place. Often teens will hang out on the top floor, sitting in their cars or people-watching while chatting with friends.

Erected in September 2013, the parking deck has served the businesses at East Main Square for almost nine years. The structure was built as a part of the “Phase One” construction process that brought Carrboro a Hilton Inn and began in March 2012.

“When you say ‘the parking deck’, everyone knows what you’re talking about,” Chapel Hill High School senior Victoria Romanova said.

The spot has become a staple of teen life in the Triangle. With five floors (including a rooftop), an elevator and a beautiful view of Main Street, it’s the perfect spot for friends to gather and hang out.

“People have fun there; they chill out,” CHHS sophomore Emerys Bowers said.

Many teens skateboard, stage photo-shoots or just talk with each other on the rooftop floor of the structure.

“It’s a great place to hang out with people in a nice and safe environment,” CHHS senior Julian Brown said. “I feel pretty comfortable there.”

Many like the spot because of its informal and intimate feeling.

“It’s a nice date spot because it’s relatively secluded but also still casual and public,” CHHS senior Mia Kalish added. “Also, you can see a huge part of the beautiful UNC-Chapel Hill campus from up there.”

During the peak of the COVID-19 pandemic, the structure became even more popular, as it was the only place where many could see their friends.

“When my friends and I were unable to hang out indoors, we’d spend a lot of time at the parking deck,” CHHS senior Tatum Chewning said. “It’s a great distance from Franklin Street, so we’d meet up at the deck and walk around downtown.”

Students say that the Carrboro Police Department does not actively enforce loitering restrictions against teens indulging in innocent fun.

“The police have questioned my friends a few times, but usually they just ask us what we’re up to and make sure we’re not drinking,” Brown said. Fans of the band Glass Animals take in a performance in August of 2021 from the East Main Street parking garage as the band played the Cat’s Cradle’s new outdoor performance space. Photo by Lola Oliverio.

In 2021, Carrboro music venue Cat’s Cradle constructed an outdoor performance space behind the Arts Center. During some of the shows, individuals can often be seen watching from the parking deck.

“It was really cool to experience a concert from up there,” CHHS senior Linden Clemens said. “I think it’s a good option for sold-out shows. It’s obviously not like being in the pit, but it’s still fun.”

The parking deck may appear as an unconventional meet-up spot, but it serves the youth of the Chapel Hill-Carrboro area quite well. It’s rarely empty, and there are often several groups of friends atop the structure. It’s a pleasant phenomenon and a lesser-known aspect of the youth culture in the area.