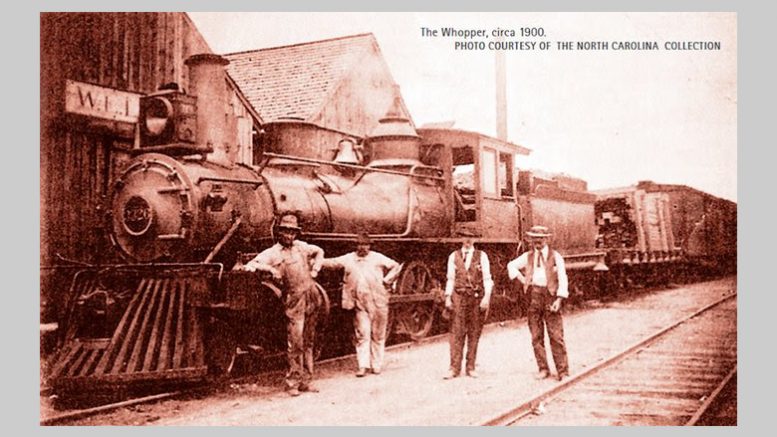 The Whooper was the name of the train that ran through Carrboro NC.

Affectionately known as “The Paris of the Piedmont,” Carrboro was first settled in the late-1800s along a University of North Carolina railroad spur and quickly became a mill town. Today, 20,000 people call it home. The town’s railroad depot, first textile mill, and a former grist mill, all listed in the National Register of Historic Places in 1976, are at the heart of the downtown; pre-World War II commercial buildings and houses adapted as offices line Main Street; and just to the north and south scores of early mill-related houses concentrated near the former mill sites survive as private residences.

In 1883, only a year after the completion of the Carrboro depot, Thomas F. Lloyd and William Pritchard built a steam-powered gristmill and cotton gin just north of the station. In 1886, he bought out Pritchard’s share in the grist mill and cotton gin, and had a flour mill built on the property.

Today, the Thomas F. Lloyd Historic District is a national historic district located in Carrboro and encompasses 25 contributing buildings developed as housing for textile mill workers associated with the 1910 Thomas F. Lloyd Manufacturing Company. The district’s buildings date between 1910 and 1915 and are primarily one- and two-story frame mill worker dwellings. A notable dwelling is located at 214 Maple Avenue, which was reportedly built by Thomas Lloyd as a “guest house” for the mill. It was listed on the National Register of Historic Places in 1986.

Other enterprising businessmen set up shop in the area and soon the small community supported blacksmiths, grocery and general merchandise stores, and a few scattered houses. By the spring of 1899, Lloyd had constructed the substantial two-story Alberta Cotton Mill (now Carr Mill) and was ready to begin operations.

Many homes and businesses in Carrboro bear the patina of age and delight that lends Carrboro its own special identity and helps the town maintain a distinct identity.

Carrboro’s preservation efforts include maintaining the homes that early Mill companies often built for their workers — one-story frame structures, one-room-deep with rear ells — houses that follow a standard design used throughout Carrboro and in other mill villages in North Carolina. Almost all houses had some type of front porch, and back porch along the rear ell. Many of the Carrboro mill houses have triple-A rooflines with a decorative cutwork vent in the front gable, and decorative sawn spandrels ornamenting the front porch. A particular detail was the diamond attic vent with a cut-out pinwheel design. The street that most clearly evokes the architectural and historical character of old Carrboro is Maple Avenue. Eleven of the houses on this street are directly linked to Thomas F. Lloyd and the employees of his second textile mill. Despite encroaching development, the uniform scale and massing of the older homes, in combination with the narrow streets and mature foliage, Carrboro continues to evoke qualities reminiscent of the former mill village. This is called character, and Carrboro is rich with it.

There’s an openness and optimism that encourages creativity and freedom of expression in Carrboro. It’s a place where more is possible and the uncommon is common. Visit Carrboro and feel free to unwind, dream, follow your heart, create, taste, shop, play, and be yourself. For a look at Carrboro’s restaurants, shops and pubs, visit their new website at www.visitcarrboro.com.

Editor’s Note: In a recent Orange Slices about the new Dame’s Chicken and Waffles in downtown Chapel Hill, the operating hours were incorrect.