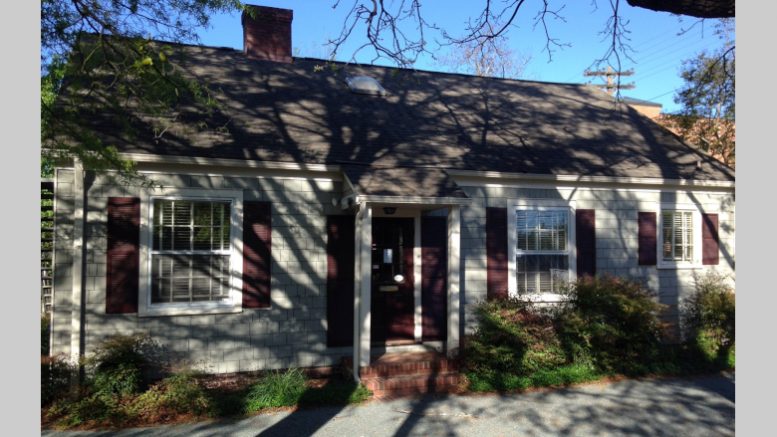 Tony Hall & Associates operated out of the little gray house at 311 West Rosemary St. for 26 years until Feb. 18, when the real estate company moved to 901 Willow Drive in Chapel Hill.

The company had rented the house on West Rosemary Street from Eunice Brock since the 1990s.

Brock, who has owned the property since 1992 and ran her real estate business out of that house before turning the business over to Hall when she retired, said only that she is renting it out but gave no details as to the new tenant. Hall did not respond to multiple requests for comment.

Rumors are swirling among the downtown community, but no one has gone on record as to the future of the property.

New development has sprung up on all sides of the lot.

In 2012, the Town of Chapel Hill approved the construction of Shortbread Lofts, an 85-unit high-end student housing complex, sparking a string of potential changes for the West Rosemary area.

In 2017, the Chapel Hill Town Council approved the West Rosemary Street Development Guide to ensure that the West Rosemary and Northside areas would retain their character and not become overrun with student housing.

The guide asserts development in the area should prioritize, for example, family-friendly and minority-owned businesses; office and commercial spaces that increase daytime activity; low-income housing tax credit development; age-restricted elder housing and housing that is affordable and accessible to Housing Choice Vouchers; and adequate parking for any new development.

Some of the things the guide does not prioritize are new student housing; residential units that don’t qualify as affordable or elder housing; building over four stories on the north side of West Rosemary Street; and development that will increase traffic flow and the need for parking in the Northside area.

In January 2018, the Chapel Hill Town Council approved the sale of the parking lot located on 127 West Rosemary to Investor’s Title Co. The sale closed in April 2018. However, the property remains undeveloped.

In February of this year, the five lots on and around the former Breadmen’s restaurant across the street from 311 West Rosemary were sold to TGAP The Warehouse at Chapel Hill II Owner LLC, a Raleigh-based student housing company. Developer Larry Short proposed constructing five four-story buildings on the property, which can be built by right under the current zoning. However, what’s to come of the lots is still up in the air.

There also have been plans proposed for a hotel on the corner of West Rosemary and Columbia streets, wrapping around the Old Town Hall building. The pandemic had paused talks regarding the plan, but council is expected to hear the proposal this year.

With development sprouting up all around the little gray house, and discussion about more development on the table, 311 West Rosemary St. will be a space to watch in the coming months. The Local Reporter will continue to report developments as new information arises.