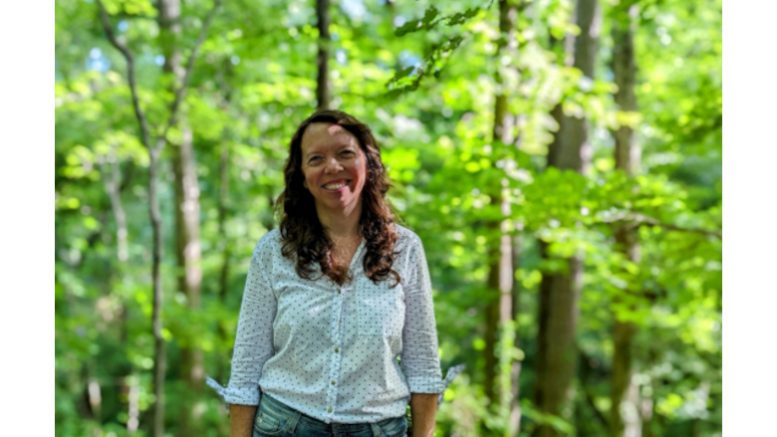 The Work Wife, the debut novel by Chapel Hill author Alison B. Hart, unfolds over the course of a single day and depicts characters set on a collision course in the #MeToo era.

The setting is the Pacific Palisades estate of movie and studio mogul Ted Stabler who, together with his wife Holly Stabler, is hosting the event of the season, a jungle nursery-themed benefit to support low-income women.

The story is told from the points of view of three women connected to Ted.

First is his hostess wife Holly, the mother of their two children and the face of Hollywood’s attempts to rehabilitate itself and champion women in all aspects of the motion picture industry.

Second is Ted’s personal assistant Zanne Klein (pronounced like the second syllable of “Suzanne,” her birth name) who has been with Ted for 8 years, and is 9 years drug-free. If the benefit proceeds without a hitch, she’s eyeing a promotion to chief of staff, buying a house in LA, and moving in with her girlfriend Gaby.

The third protagonist is Phoebe Lee, Ted’s first wife, former business partner and co-producer on the first two installments of The Starfighter trilogy, the films which elevated Ted into the ranks of Hollywood royalty, but didn’t pan out so well for Phoebe.

The novel is fast-paced; it reveals new details about characters, relationships, and personal histories in dense layers that keep on coming. The story alternates rapidly between advancing the narrative of what’s happening in the present and revisiting the past.

In fact, the past hangs like a dark shadow over the entire story and its principal characters, who often seem stuck because of unresolved issues from their earlier lives. There are minute character details and interconnected backstories, all of which profusely color the day’s events.

Each chapter is titled after one of the principal women and is told from that person’s point of view. However, the chapters aren’t necessarily about their eponymous character. Rather, in each chapter, Hart deftly reveals more and more about the three non-titular protagonists.

Hart knows her characters intimately and achieves expressiveness and an economy of words without losing any plot logic.

The inner lives of Phoebe, Zanne, and Holly drive the story, each of whom become the better by the end of the book for resolving internal conflicts, overcoming self-doubt, setting boundaries, and growing as people.

Replete with a Harvey Weinsteinian figure in the power player Jerry Silver, The Work Wife is a crucible in which personal, cultural, and film industry truths burn hot enough to be finally revealed. This leads to new relationships being forged, old scores being settled, and the completion of the inner journeys of each of the three female protagonists.

The novel offers an insider’s view of the machinations involved in the world of personal assistants. The Stablers have a 30-person staff to assist with every aspect of their personal lives and the family office. In an afterword, the author acknowledges her work experience in this world.

Despite its weighty contemporary themes, The Work Wife is a romping read and incisively funny. Readers will laugh out loud, chortle, snicker, and smile throughout the action.

TLR interviewed the author about her inaugural novel.

How did you start writing?

I’ve been writing ever since I was a little girl, but I started writing seriously during college. I was a pre-med major, but I slept out overnight to get a spot in my first fiction writing class. After that, I was hooked, and my dreams of being a doctor started to fade. A few years after college, I moved to New York to get my MFA at The New School, and I’d start the clock for my “working writer” years then. From that point on, whether I was freelancing, working as a personal assistant to a wealthy family (like Zanne), working some other 9 to 5, or not working at all, my underlying goal was to always keep writing in the picture. I’m still in my “working writer” years, by the way!

You write with pinpoint precision in The Work Wife. What are your tips for novice and emerging writers on how to sharpen a text?

I used to write more slowly, and my sentences tended to be more complicated and worked over. Over time I’ve become less critical of myself in the drafting stage, and I focus more on pacing, action, dialogue, and character dynamics. Since I’m focused on all that, I’m not as worried about finding the just-right word. Revision is when I come back to the sentences to make them as precise as I can.

In the novel, the character Phoebe Lee is a Korean American woman. She is now a high school English teacher with an ambition to still have her Warrior Bride movie released. She was often the real talent and no-nonsense boss of The Starfighter I and II. And she was sexually harassed by Jerry Stiller. How does Phoebe encapsulate the challenges women face that the #MeToo Movement has put in the spotlight?

Once I envisioned bringing a woman from Ted’s past into the story, I knew I wanted to explore the differences between a male director’s and a female director’s career trajectory. Ted has had twenty years to work unimpeded by sexual harassment, sexism, or racism. The world has conspired to make things easier for him, and he used the money and fame he garnered to set up his career, his home, and his marriage to operate exactly how he needs them to. Furthermore, Ted’s hardly aware of his own advantages. He’s not sure that Phoebe didn’t play into her own assault (criticizing the way she dressed, for example) and he doesn’t see color, which means he can’t really fathom the extra set of rules she has to play by that doesn’t apply to him.

About two-thirds of the way into the novel, the pace and language shift, becoming more rapid, and the three protagonists gain clarity in their speech, actions, and inner dialogue. How, technically, did you build to a climax in a seamless way that remains consistent with the rest of the book?

I’ve heard writers defined as either pantsers (who figure out the story as they’re going along, by the seat of their pants) or plotters (who use an outline and generally like to know where they’re going). I’m a plotter for sure. So is my editor. We spent a lot of time before I wrote one word of the revision charting out all the story’s twists and turns and figuring out exactly when all the reveals should happen. Gaby seems to be the conscience of the novel. She rejects who Zanne is at work. She’s not at all interested in working for Ted. Gaby lays the groundwork for Zanne’s self-reckoning regarding her complicity in the wrongs happening around her. Why did you choose to voice this criticism through Gaby?

Gaby’s much younger than Zanne, Holly, or Phoebe, and still retains a jaded sort of idealism about the world. She’s also never met Ted Stabler, the famous director, nor has she been to his estate where her girlfriend works. There was a kind of critical eye that she could bring to that world, seeing it for the first time, that none of the other characters in the book could. We also needed to understand who Zanne is when she’s not at work, and her relationship with Gaby gives us a different take on her. The two things Zanne has to lose are her financial security and her relationship with Gaby, which makes Gaby’s disillusionment with the kind of person Zanne becomes when she’s doing Ted’s bidding (and raking in that cash for doing it) all the more important.

Staff members Flora and Letty wear uniforms and refer to Holly as “Senora,” whereas all the other staff call her “Holly” at her own insistence and don’t have uniforms. What are you highlighting with this obvious discrepancy?

This inequity is something that Zanne knows is there but kind of files away in her mind as “just one of those things” until her girlfriend Gaby, who’s also Latina, calls it out. At Zanne’s workplace, the people on the bottom are the Spanish-speaking landscapers and housekeepers. Holly is one of those well-meaning white women who considers herself fair and egalitarian and is uncomfortable when white employees are too deferential to her, but when her Spanish-speaking employees defer to her, it doesn’t set off the same alarm bells for her. As a gay woman, Zanne’s marginalized herself, but she’s sort of bought into the thinking that the Stablers are fair and don’t concern themselves with status, because being an out lesbian hasn’t hurt her there. It takes the presence of Gaby on this day, and seeing her workplace through a woman of color’s eyes, for Zanne to realize that she’s drunk the Kool-Aid a bit.

What are some of the obstacles woman writers face in the publishing world?

Women’s work is often dismissed as “domestic” or “quiet,” when a man writing about the same themes is heralded. Statistically, white women are actually over-represented in the publishing industry, which isn’t to say that they’re all paid a livable wage or given chances for advancement. And despite the efforts made in 2020 and beyond to diversify publishing, the authors who have their books published are still overwhelmingly white. So, it’s really people of color, and women of color especially, we should be thinking about.

You’re a self-admitted people pleaser. Your motto used to be “happy to help.” These aren’t bad qualities to have except when they get in the way of work-life balance. What insights do you have into achieving this often elusive balance?

This is something I’ve grappled with for years and wrote about most recently in New York Magazine. It can be really difficult for women, in particular, to strike a balance between their personal and professional lives. It’s easy and comfortable for me to slot into helping roles in my family and also in the office, but it often comes at the cost of pursuing my own interests. Now that I’m in my late forties, I have to ask myself, how much longer do I want to stay behind the scenes? For a long time, I was sort of unconsciously trying to “earn” that right, and now I’m trying to challenge that notion. I still very much believe in community and helping my loved ones and my neighbors, but I don’t want to put my own dreams last as a default.

Alison B. Hart grew up in Los Angeles and now lives in Chapel Hill with her family.

She will be in conversation with Lauren LeBlanc at Flyleaf Books July 26, preceded by a book signing at 5:30 p.m.

The Healing Power of Artmaking and the Creative Life: Part II