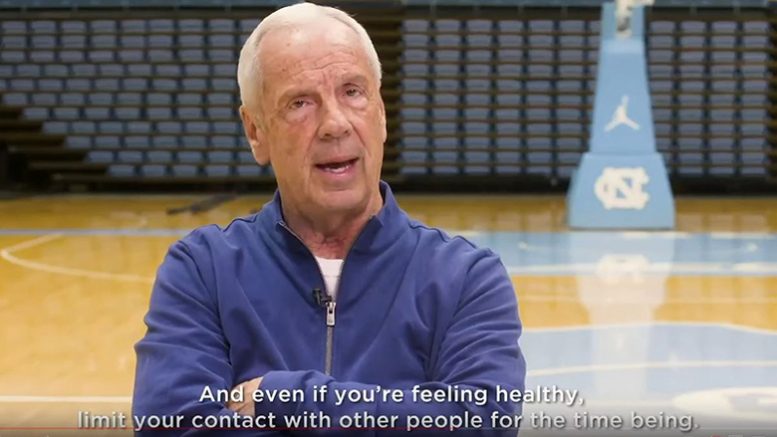 Basketball season is on hiatus, but props to the Triangle’s three ACC men’s basketball coaches for a video they did together. Roy Williams of UNC-Chapel Hill, Mike Krzyzewski of Duke University, and Kevin Keatts of N.C. State University all urged fans to follow proper guidelines when it comes to the coronavirus. “We can beat this,” Williams says. “But we all need to play together on the same team right now.” View the video here.

It’s too early to forecast the impact the coronavirus pandemic will have on the building industry. Here is a recap of several key projects in Chapel Hill and Carrboro currently in the planning stage: Dallas-based Leon Capital Group has filed plans to demolish the existing buildings at the site of University Inn in Chapel Hill’s Blue Hill District. Redevelopment plans seek to make the property into a 7-story complex with 344,244 square feet of commercial and multifamily space. The new structure would feature around 341 one- and two-bedroom residential units and approximately 18,450 square feet of commercial space on the northern end of the site as well as structured parking for nearly all of the parking spaces.  The property is situated on 3.9 acres at 1301 Fordham Drive across the street from the Eastgate Shopping Center. Dallas, Texas-based Trinsic Residential Group has filed plans for its premiere project in the region: 500,000 square feet of mixed-use space including 400 residential units as well as retail and office space. The project is situated on 14.7 acres on the northeast corner of Martin Luther King Boulevard and Estes Drive in Chapel Hill across from the Horace Williams Airport. The project is tentatively dubbed Aura Chapel Hill. Of the 400 residential units included in the project, Trinsic has proposed that 20 will be townhomes, 60 will be affordable apartments, 310 will be market-rate apartments and 10 will be live-work units featuring ground-floor workspace and residential space on the floors above. Affordable units would have the same layout as market rate apartments and would be interspersed throughout the project. Commercial space will feature retailers, though Trinsic does not plan to solicit grocery interest due to the potential traffic impact of grocery stores.

Plans for a mixed-use destination in Carrboro took a big leap forward in late February when a grocery chain closed on the land for the project. North Carolina-based Harris Teeter has closed on 40 acres of land proposed for the Lloyd Farm mixed-use development. The company paid $10.6 million for the property. The site is situated at the corner of N.C. Hwy. 54 and Old Fayetteville Road, across the street from Carrboro Plaza and west of downtown and Chapel Hill. Plans for the store call for 60,000 square feet of retail space set to anchor the 40-acre site. Altogether, plans for Lloyd Farm call for 125,000 square feet of retail space – including the new Harris Teeter and additional commercial parcels – as well as a 220-unit senior living campus, called The Lofts at Lloyd Farm. The residential space breaks down to 200 apartments and 20 duplex cottage units. Raleigh-based State Employees Credit Union (SECU) has announced the completion of extensive renovations and capital improvements to the former headquarters of Blue Cross NC. The 4-story, 195,000-square-foot Class A office complex is now known as The Parkline. The property is situated on a 39-acre campus at 1830 Fordham Blvd. abutting the site for the future Chapel Hill Wegmans and down the road from the New Hope Commons and Patterson Place shopping centers. The complex is one of the largest blocks of Class A office space in the Triangle.

Town Facilities Closed to the Public