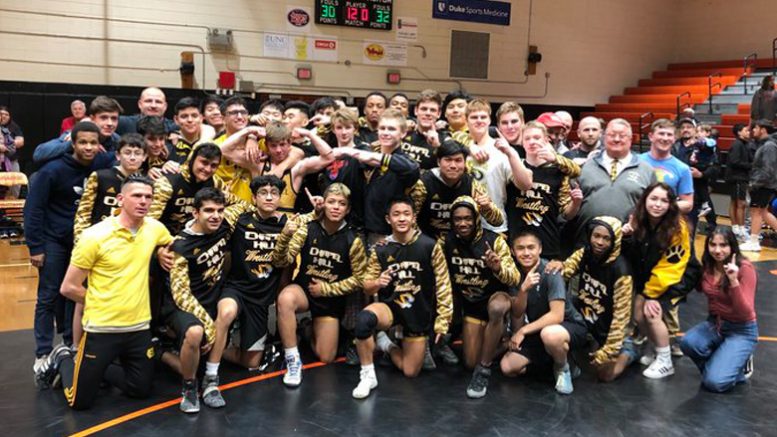 The Chapel Hill wrestling team celebrates after beating Orange for the 2020 Big 8 Championship. It was the Tigers’ first win over the Panthers in wrestling since 1988 and ended Orange’s run of 16 straight conference titles

“Stay behind the line.”

As Tripp Price’s mind was racing, with raucous pandemonium unfolding around him, that was his first thought. His wrestlers at Chapel Hill High had just accomplished something that no Tiger team before it had done in 32 years.

They beat Orange. For the Big 8 Conference Championship. On the Panthers’ senior night in Hillsborough. And they came from behind to do it with a pin by a freshman in the final match.

The last thing Price wanted was to have one of his wrestlers run out on the mat too early in jubilation — costing them their first Big 8 Championship — on some obscure, back-of-the-rule-book technicality.

There was no need to fear. His captains, Can Kilic, Devine Pipkins and Moo Soe, were there to keep a wild scene from becoming completely chaotic.

It was a celebration that was richly deserved and way overdue.

For a school that’s won three different state championships and four regional championships since October, one conference championship may seem like a drop in the bucket at Chapel Hill. But the Tigers’ wrestling team did something that no other school in the Chapel Hill-Carrboro City Schools district did this year.

They ended a dynasty, or at least brought it to a temporary stop. The Orange wrestling team had not lost a conference match since 2003. In December, the Panthers defeated crosstown rival Cedar Ridge 57-12 to finish 62-0 against league foes for the decade of the 2010s. Orange had won 16 consecutive conference championships spanning three classifications.

It all ended on Jan. 30 when Chapel Hill defeated Orange 32-30 in Hillsborough. It was the first time the Tigers topped Orange in wrestling since 1988 and it couldn’t have ended more dramatically.

Trailing 30-22 going into the final two matches, Soe earned a major decision over Josh Dunn, 19-11, at 113 pounds to reduce Orange’s lead to 30-26. The Tigers would need a pin or a technical fall in the final match. A standard decision or even a major decision wouldn’t be enough.

Chapel Hill freshman Porter Brice, who was three years away from being born the last time Orange lost to a conference opponent, pinned John-Michael Bourlon in 4:44 to send the Chapel Hill bench into a frenzy.

“It was sealed in our minds that we could beat Orange this time,” said Kilic, a senior who defeated Orange’s Korbin Nevius 8-4 in the 160 pound match. “There was a feeling of confidence about this team all year long like this was the year we could beat Orange.”

Since Chapel Hill and Orange became conference rivals again in 2009, when the Tigers moved down to 3A, they’ve almost always met in the final match of the regular season. Usually, the conference championship hangs in the balance.

“We were just extremely excited going home on the bus,” said Soe, who finished 38-10 in his senior season and qualified for the State Championships at 113 pounds. “As soon as the whistle blew (when Porter got the pin), our coaches held us back from going on the mat too early.”

Price has been associated with the Chapel Hill wrestling program since 1989, including two stints as head coach. Before this year, he had never won the conference championship at a school that may have the richest athletic heritage in the state.

The conference championship was the icing on the cake for a special season for Chapel Hill wrestling. Last month, Chapel Hill finished 3rd in the Mideast Regionals at Cape Fear High School and sent five grapplers to the 3A State Championships at the Greensboro Coliseum.

In addition to Soe, sophomore Lucas Daley finished 2nd at 106 pounds and ended the year 22-6. Bryce, Alexander Gunning (at 145 pounds) and Pipkins (at 170) also made it to Greensboro.

On top of that, Tigers assistant coach Chase Kernodle, who graduated from Orange and still lives in Hillsborough, got some bragging rights at the family dinner table this year.

“It was a personal point for him,” Pipkins said. “He still has family that lives in Hillsborough and they always talk trash about he’s at Chapel Hill and not Orange. He wanted about nine of us to qualify for the state championships. Unfortunately, that didn’t happen. He made sure we all got 1 percent better every day.”

A Field of Dreams, Not Games

Be the first to comment on "Chapel Hill (Finally) Pins Orange"