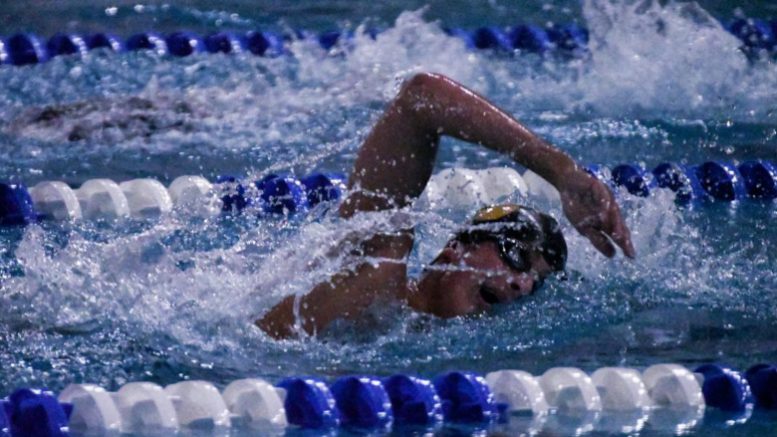 The CHHS men's swimming and diving team won its conference championship for the third consecutive year. Photo by Greg Zoltners.

After winning the DAC VII championship—the third consecutive year the team has won its conference—the Chapel Hill High School men’s swimming and diving team placed tenth in the 4A Central Championships, marking the end of the 2021-2022 season with a 3-2 record.

Senior captain Ayden Xu took first place in both the 100- and 200-yard freestyle events at the conference championships on January 26, finishing the races with times of 48.32 and 1:48.37 respectively, while sophomore Eddie Wang took second in the 50-yard freestyle (21.96).

Head Coach Gregr Zoltners believes that the team performed well given the adjustments the team had to make because of the pandemic.

“COVID restrictions severely limited our practice time early in the season, and several meets were canceled due to weather and COVID,” Zoltners said. “Overall, it was an unpredictable and difficult year, but we swam and dove well at the end of the season.”

“Going into the season, there were a lot of expectations to win conference and do veryat regional and states, as we were the defending champs,” Wang said. “The team did very well in dual meets as we did not lose a single one. We won conferences and did well at regionals. States were tough, but the team performed well—it was a fun and successful season.”

“The community that was built between the divers and our new coach, Meg McDaniels, brought the team together and provided a strong foundation to fall back onto and to grow from,” Baker said.

McDaniels has assisted the school’s diving team for 14 years, but was promoted to head coach this season.

“I really am excited about next season because we have such a young team! They are all capable and talented and have tons of potential to represent Chapel Hill High School at the conference, regional and state levels,” McDaniels said.