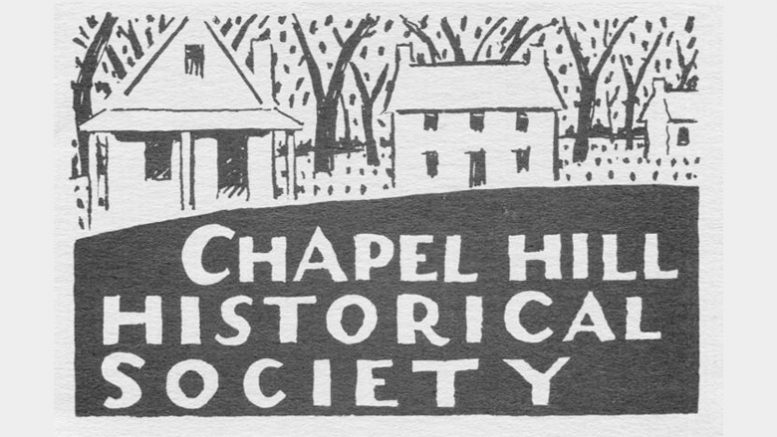 The Chapel Hill Historical Society (CHHS) is looking for a new home. According to Richard Ellington, CHHS’s vice president, the Society’s space in the Chapel Hill Public Library (CHPL) has been reduced to the point that the organization can no longer continue its history of service to the Chapel Hill-Carrboro community.

As its mission statement says, CHHS was “founded in 1966 to research and document the history of Chapel Hill and the surrounding communities, to encourage and assist in the study of local history, and to provide public programs and publications related to the heritage and traditions of the area.” Its collections span varied and vast topics and time periods.

For example, the Society’s collections include books on local ghost tales; some 300 maps and blueprints of the old town hall; the champagne bottle used to christen the USS Chapel Hill; high-school yearbooks dating back to 1925; a large reference collection related to both Chapel Hill and Carrboro and their surroundings on topics such as African American community history (which includes a great deal about the civil rights struggles), local cookbooks, UNC sports, and UNC history (including the university’s contribution to the WWI and WWII war efforts). The Society is engaged in an ongoing search of histories of local families — some of whom have been in the area as far back as the 1750s — and offers references from local government records to use in tracing family histories. Their almost-complete collection of Chapel Hill Weekly newspapers begins with the first ones that were published in 1923 and runs until 2010; and some of their materials on churches date back to the early 1800s.

In addition, CHHS has the complete collection of the Town of Chapel Hill’s records for town owned-and-operated cemeteries and is adding this information to its online collection of materials. Its materials on Carrboro and the environs include the mill that has become a landmark and many interviews that were conducted in the 1970s with Carrboro folks whose families came to work in that mill when it opened in 1899.

The organization also holds a large collection of volumes on the natural history of the area, including the surrounding countryside and its natural beauty; and owns a collection of books on local geology, geography, and botany; books and materials on the surrounding county and environs; and books and materials on general Southern history. Recently, the Society published histories of the Coker Hills and Kings Mill/Morgan Creek neighborhoods and plan to continue helping to develop and disseminate community histories.

Ellington says, “I think it’s important to have a knowledge of what your town used to be, as well as what it has become. Everyone used to know the history, but now we have newcomers. …We [the Society] can tell you how your community got to be such a nice place.” John Sweet, UNC Professor of History, emphasizes the important role local historical societies play in both curating and communicating local history: “Our sense of place is largely colored by our understanding of the past,” he notes.  “Local historical societies can play a crucial role in enriching and enlivening our sense of what went before and what it means for us now. Without robust local history programs, our sense of place is diminished.  Without a critical engagement with the past, we suffer a kind of amnesia, and important truths are obscured by nostalgia and self-serving mythologies.”

CHHS occupied space on the lower level of the old Chapel Hill Public Library (CHPL) on East Franklin Street and provided a local history room there until the library was put up for sale, at which time the Society was asked to move. When the new library opened in 2014, Susan Brown, its director, contacted CHHS about giving it a space of its own, and in February 2015, the Society moved into its allocated space: a rectangular room of about 500 square feet. It provided plentiful space for CHHS to hold meetings, house its collections, and host events. However, Ellington said that Brown also told him that CHHS would be able to occupy the space “only for a time because it was actually built as a growth space, to be used for technology applications, and the library would ultimately want it back.”

Over time, CHHS experienced several decreases in its allotted space and now, according to Ellington, faces a reduction that will leave it with only enough room to sell books, have a phone, and house its reference library, which is used extensively by library patrons and by the library itself. He has been told that the library plans to build a separate Arts & Culture division — a “Community History lab” — in the space initially occupied by CHHS. The new division will contain oral histories of local individuals and communities, with a heavy focus on the African American community. In Ellington’s view, CHHS’s work established the viability of such a lab, and his understanding is that its work will be much the same as what CHHS has been doing. For example, the Society has three African American individuals on its board and has committed energy and focus to the lives of local African Americans. “There has been a re-focus and shift in interest [on the part of the library],” Ellington stated, “because of the success we had in providing basically the same community history programs.”

CHHS has indeed been successful in drawing local interest to its functions and collections. It is not unusual for 30 or more people to attend its monthly meetings, which take place nine months a year. And its annual “Town Treasures” event, which honors 6-8 people for their contribution to making Chapel Hill-Carrboro a special community, is very popular. Now, however, Ellington says that CHHS will no longer have sufficient space at the library for its functions, meetings, and collections.

On Sept. 20th, CHPL announced plans for “a new, innovative space dedicated to exploring and sharing the rich history of Chapel Hill’s people, places, and moments.” According to CHPL’s press release, this new Community History Lab will be located in the lower level and house a variety of resources, including “skilled staff, digital tools, and collaborative space… and will be an inclusive and participatory space for individuals and organizations to collaborate and co-create public history projects.” The announcement further notes that the Lab will provide community members with tools and guidance on how “to preserve their histories and share their stories.” One of the tools to be provided is “the reference collection of the Chapel Hill Historical Society … which will be housed in the space.”

The announcement seems to confirm Ellington’s claim that the only space that will remain available to CHHS will be the space needed to house the reference collection it has assembled over time, and that the projects planned by the Lab are much like what CHHS has provided in recent years.
Although CHPL’s press release states that there is “no firm launch date” for the new Lab, “the Library plans for it to be open when COVID restrictions are lifted and the building fully re-opens.”  This is why CHHS is now eagerly seeking new quarters. Ellington hopes that some organization will come forward to assist them.