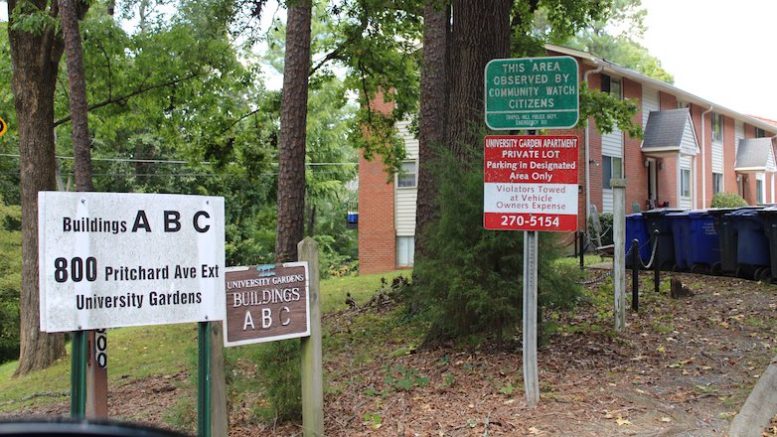 University Gardens, a residential complex near the UNC-Chapel Hill campus, is the site of a second gunshot homicide in 2022. Photo by Michelle Cassell.

Chapel Hill Police responded to a report of multiple gunshots at the 800 block of Pritchard Avenue Extension at 6:18 p.m. Tuesday. Police found one person dead, and two more gunshot victims have been transported to UNC Hospitals, according to the Chapel Hill Police Twitter report on Tuesday evening.

The victim of the shooting is Michael Deshai Lee, 51, of Chapel Hill, according to an updated Wednesday afternoon Chapel Hill Police Department (CHPD) press release at 2:27 p.m.

A fourth person was injured, but police did not give details about the cause of the injury. According to the last report, the three injured victims will survive.

The investigators have declared Lee’s death a homicide. The Police Department continues to say they do not believe there is an ongoing threat to the community.

Second death from shooting at University Gardens; fifth murder in 2022

The crime scene is less than one mile from the University of North Carolina-Chapel Hill campus. University Gardens of Chapel Hill, an apartment and condominium complex, is the same place where 19-year-old Rahzel Tyree Jenkins was shot on August 26 and died the following day at UNC Hospital, according to The Local Reporter.  Three days later, Anthony Holman, 22, of Chapel Hill, surrendered to the police and was charged with first-degree murder in Jenkins’ death.

A police spokesperson said the CHPD has no reason to feel these two homicides are related. As earlier reported by TLR, in 2021, there was one homicide, and in 2020 there was none.

At press time, CHPD is not offering any more information on the identity of the three injured victims or if anyone is in custody for the crime. This report will be updated when more information becomes available.

Anyone with information about this incident should call 911 or the non-emergency Orange County Communications number, 919-732-5063. Callers who wish to remain anonymous can call Chapel Hill-Carrboro-UNC CrimeStoppers at 919-942-7515.

Food for Students Program Adapts to the Needs of Orange County Parents, Children