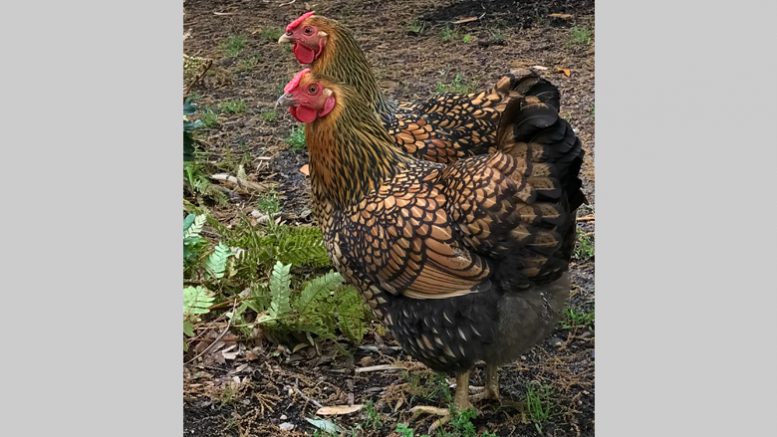 During COVID lockdown, our three chickens have become a major source of entertainment. We call it “Chicken TV.”

Holly and Hunter are gorgeous Gold Laced Wyandotte chickens. Each light brown feather is outlined in black and the little feathers on their necks shimmer in the sunlight. We bought them as fluffy yellow nothings from Southern States in Carrboro for $3 each. We bought one Araucana chick, too. She is Honey, the pure white haughty leader of the flock. My husband James designed and built what we call the TajMaCoop on the side of our house so it takes only one step out the back door to collect eggs. The coop is varmint proof — no snake, raccoon or fox can get in. We love watching our trio as they wander our yard, lay yummy eggs and get themselves back on their roosts at sunset.

Sometimes a red-shouldered hawk dives at Honey because she’s so obvious in her white plumage, but she ducks under the bushes. The others stand like statues in brown camouflage. Our pet duck, Lucky, sometimes pushes the girls out into the street. I get out the dried meal worms calling, “Chick-eee! Chick-eee! Chick-eee!” and they all come running.

Two weeks ago, I noticed Holly standing hunched in the far corner of the coop. As I picked her up she belched a vinegary gas. What was that? As a child on our Maryland dairy farm, I’d had only the pleasure of collecting eggs and stroking the feathers of the friendly chickens in our big flock. I’d never had to tend to a sick chicken. I remembered only that any chicken not keeping up her end of the bargain was taken to the old tree stump with the designated axe stuck in the top.

I called our dog’s vet who said they don’t take care of chickens. They referred me to Avian and Exotic Animal Care in Raleigh. When I described Holly’s symptoms, the nice man said, “I’m sorry, we don’t diagnose over the phone. We’d have to see the patient.”

James and I agreed when we began our suburban chicken husbandry that as much as we liked them, we would not take a chicken to a vet. My sister Judi came, took one look at Holly and said, “She’s a chicken. Chop her head off. Make soup!”

I turned, sadly, to the Internet to see if chopping the head off was still the preferred method of taking care of a less than 100-percent healthy chicken. I learned that chicken “euthanasia” is an often-discussed topic.

Your preferred method on ending a chicken’s life depends on why you have chickens in the first place. If they are primarily pets and eggs are a side benefit, then you might spend the $80-$100 to have your chicken “euthanized” by an avian vet. If you are a homesteader, raising chickens primarily for eggs and meat, two methods are preferred — both involve separating the head from the neck.

I wasn’t ready to sharpen our axe. Chickens can live 8-12 years. In these days of COVID, I need my chicken friends’ movement and warmth.

I went back to the Internet where I learned about something called sour crop. Chickens have little bags where the food goes before it moves into the gizzard where it gets ground up. If the food is spoiled or sits too long in the crop it can become “sour.”

Actually, it becomes a yeast infection. Yes, just like women get. So, guess how you can treat it? Monistat — Antifungal cream. Yup.

That is if you don’t want to go the homeopathic route of crop massages, garlic water and Greek yogurt. And, you have to decide if you’re up for helping your chicken vomit up the bad stuff. Chickens don’t have a gag reflex like people and dogs who can just upchuck something as unappealing as rotting food.

I opted for modern medicine. Monistat helped me in the past, why not my poor chicken? Although it says on the tube, “Not for internal consumption,” Holly didn’t mind eating it as long as I mixed the medicinal cream with yogurt and hardboiled egg.

Yes, hardboiled egg. Seems a bit cannibalistic, doesn’t it? Chickens love eggs and even egg shells, so typically you don’t let chickens get the taste or you’ll never get their eggs for your own breakfast.

After three days of Monistat treatment, Holly stopped burping. But now I worried about the possibility of a “dropped crop.” According to the Internet, if a chicken goes too long with a troubled crop, the muscles may wither and the crop drops too low to send the food into the gizzard.

The solution? A “crop bra.” No kidding. On the Internet it looks a bit like a face mask tied to the front of the chicken. Luckily, at this moment in our history, I have lots of face masks.

When Holly flew out of her box when I opened the lid the other morning, it was time she was back in the coop. Hurray.

But now we have another problem. Hunter is not happy with Holly’s return. Previously the lowest bird on the three-rung pecking order, Hunter took the opportunity of Holly’s convalescence to assert herself as number two. She isn’t giving up her new privilege easily. Whenever Holly gets close Hunter pecks her head hard. Ouch.

I’m going to let them figure this one out themselves. Just another episode of Chicken TV.

Jane D. Brown was a professor in the UNC Hussman School of Journalism and Media for 35 years. She and her family and pets live in Lake Forest.

Why Businesses are Leaving Chapel Hill