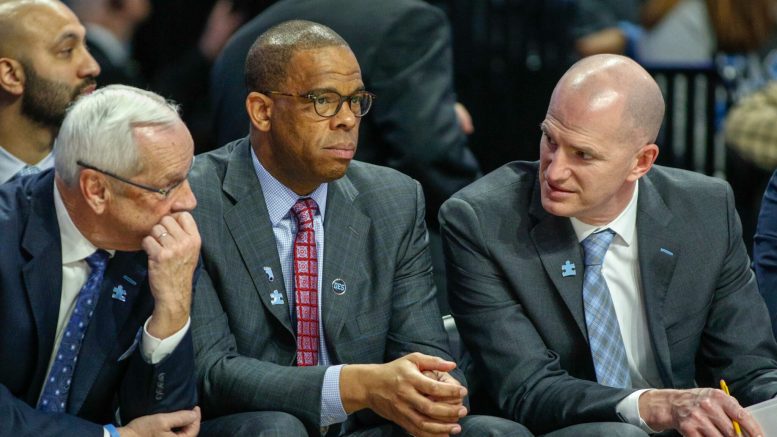 Growing up as a kid in the nineties, Allen Buansi remembers watching Hubert Davis, then a member of the New York Knicks, on TV. After playing for Dean Smith at UNC, Davis had a productive career in the NBA spanning 12 years; a Chapel Hill local, Buansi says it was “surreal” to see a Black man and Tar Heel graduate on that stage.

Now, Buansi is on the Chapel Hill Town Council, and Davis is UNC basketball’s next head coach, the first Black coach in program history. Buansi says Davis’ hiring, which the school announced on April 5, is a landmark for the program, the university and the town of Chapel Hill. He hopes the move will have a similar effect on kids today as Davis’ NBA success did on him years ago.

“I was really thrilled and excited,” Buansi said. “I mean, he’s making history, and he’s a true Tar Heel.”

After retirement, Davis spent some time as an analyst for ESPN before returning to Chapel Hill as an assistant coach. When Roy Williams announced his retirement on April 1, many pegged Davis as a natural choice for his successor; four days later, he was holding his introductory press conference, officially the first African American coach of UNC basketball.

“I love this university. I played here, I earned my degree here, I fell in love with my wife here, I got married here, I moved here after I retired from the NBA and I have raised my family here,” Davis said. “I am proud to lead this team, and I can’t wait for all that comes next.”

Buansi pointed out that UNC and Chapel Hill tend to make racial progress on similar timelines — it was less than three years ago that Chapel Hill hired its first Black town manager, Maurice Jones. Buansi hopes to see Davis, who’s called the town home for years and raised a family here, work with the local community on addressing social issues.

“I want to do everything I can to be supportive of him, and what he’s trying to do with Carolina basketball, especially as it pertains to advancing racial equity,” Buansi said. “So, you know, I’m here, the council’s here, the mayor’s here, to help out in whatever way he may see fit.”

UNC’s Black Student Movement did not respond to multiple requests for comment, but Nate Davis, former director of the town’s Hargraves Community Center, noted Coach Davis’ onetime role on the board of the Campus Y at UNC, and also hopes Davis will continue being involved in town proceedings.

“He’s a wonderful guy, and I’m pretty sure he’ll be a wonderful coach,” he said. “And I think he’s gonna be a great addition to the Chapel Hill-Carrboro community.”

On a national level, Davis is just the second Black head coach at one of college basketball’s four premier programs — Kentucky, Kansas, UNC, Duke — and the only one since Tubby Smith left Kentucky in 2007. And despite the recent success of some new hires — second-year coach Juwan Howard led the Michigan Wolverines to a No. 1 seed last season — change has been slow to come by, with just 22.7 percent of Division I coaches being Black, compared to 53.2 percent of players.

Buansi hopes Davis can work to change that.

“On the national scale, there really haven’t been that many African-American coaches at big programs,” he said. “So, my hope is that the door is that much wider going forward, because the disparity in the coaching ranks is pretty stark.”

Sea change or no, Davis’ hiring is monumental in itself, local leaders said — and, for what it’s worth, they’re optimistic about his chances of success on the court, too.

“Next year, I’m expecting a team that’s gonna have their hard hats and lunch pails,” Buansi said. “They’re going to work hard and, you know, lay a foundation for even greater years down the road.”

Be the first to comment on "Choice of Hubert Davis Inspires"