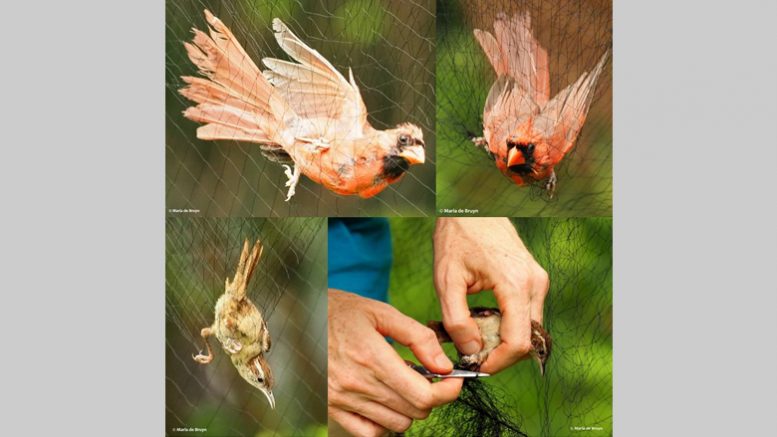 Since 2015, it has been my privilege to participate in a citizen science project run by the Smithsonian Institute called Neighborhood Nestwatch. Every year, a local scientist visits my yard, sets up mist nets and sets out to capture one or more individuals of the following avian species: American robins, Carolina chickadees, Carolina wrens, gray catbirds, house wrens, Northern cardinals and Northern mockingbirds.

So far, I’ve had 28 birds banded in the project, including all the target species except the clever mockingbirds who always avoid the net: robins (2 individuals), chickadees (3), Carolina wrens (6), gray catbirds (4), house wrens (2) and Northern cardinals (11).

The mist nets are put up early in the morning before the sun shines too brightly on them. They are then more difficult to see and the birds (theoretically) may more easily fly into them. If the snared bird remains still, it won’t get too tangled up and can be removed easily from the net. If they struggle, they can become very enmeshed and it takes longer to extract them — very occasionally requiring netting to be cut.

Occasionally, a “non-target” bird is caught, such as a red-bellied woodpecker, a blue jay or an American crow. The woodpecker was very angry and managed to draw blood from the bird bander; I spoke to the crow and s/he calmed down and stayed pretty still until all the netting had been removed.

Some birds are very clever at avoiding the net. Others are really quick movers and especially the house wrens managed to escape twice before the scientific measurements could be made. Each bird is weighed, the sex is determined if possible, the length of the tail is determined, as well as the bird’s overall condition and breeding condition.

A feather is removed to be sent to the Smithsonian lab and then the leg bands are placed. Then the bird is released and in previous years, I was able to let them each go. Each bird has a different combination of colored bands so that the citizen scientist can determine which birds are seen again. We go to a website that lists all of our banded birds and when we see one again, we can enter the date and any details that might be of interest.

We also watch out for nests and record as much data from them as is feasible: when constructed, how many eggs were laid, how many eggs hatched and how many babies fledged. The nest may belong to banded birds, but the project also accepts data on nests from other birds as well.

The rationale for the project is described by the Smithsonian Institute as follows: “The data [that participants] collect reflects how long a bird lived in their yard and the surrounding area. Data recorded about a bird’s nest sheds light on how well birds are able to reproduce within an area. By submitting their observations, participants help Smithsonian Migratory Bird Center scientists understand how successfully different species are surviving across a range of environments that are impacted by people.”

After banding, I don’t always see every bird again. It doesn’t mean they have migrated or died, however. I’ve given names to the birds and the ones who visit (semi-) regularly have become like “old friends.” It’s very cool when one decides to return, and I hope to be able to continue with this project for some time to come!