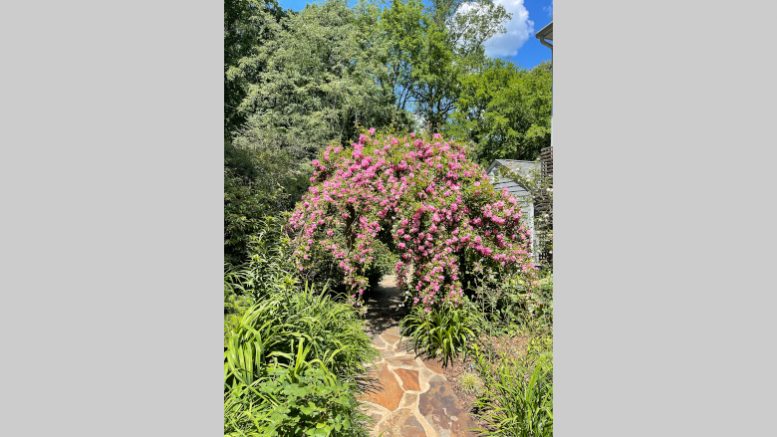 During the height of the pandemic, because there was little else to ponder, I began wondering what distinguishes rambling roses from climbing roses.

Rose terminology can be rather daunting. Climbing roses and rambling roses both grow long canes. However, climbing roses cannot climb in the manner of vines, while rambling roses don’t wander all over the countryside. Both types require structures that can support their canes — and the canes usually must be tied to these supports.

It’s important to know the difference between the two types of roses because we need to treat them differently. The major differences are as follows:

Many gardeners opt for the climbing roses that will give them more bloom for their money, but the display many ramblers produce also merits consideration. For example, four years ago, I installed a large wooden trellis in the garden and planted the rambler Lady Banks rose at each end. Lady Banks is a wonderful rose and, for two years, she just sort of sat, as though she were contemplating whether this was a nice enough garden to join.

In the third year, she began to put out a display — and then grew, and grew, and grew until she totally covered the whole trellis. This year, her display in early April was simply awesome. Her canes are lithe and flexible, so that even when she isn’t in bloom, she’s still a presence. She is the perfect rose for the trellis.

Along the two columns flanking my portico, I placed a climbing rose on either side because the columns required stiffer canes that wouldn’t flop. Again, it’s taken the roses three years to start doing their thing, but they are now filling out the columns beautifully.

Both Lise and I have the Hurricane Katrina rose, known as Peggy Martin, a rambler that is a star in both of our gardens. When I planted her in an obelisk, I thought there was sufficient room between the sidewalk and her structure — and, for two years, there was. During the third year, however, she began to acquire most of the sidewalk section. To allow guests entry into my house, we had to build another supporting structure on the other side of the sidewalk so we could toss her long canes over it. The result is pretty cool: To get to my front door, visitors must walk under this thornless rose. Because her canes were flexible, this draping was possible. Had she been a climbing rose, she would have had to come out.

Ramblers require very little grooming, whereas climbing roses need to be deadheaded and pruned periodically. If you want to cut ramblers back, do so after their bloom time as they bloom on old wood. You may prune climbers at any time, especially in February. They also need more fertilizer than do ramblers.

Ramblers require no chemical sprays, whereas some climbing roses lack disease resistance, so do your research before purchasing a climbing rose. The important thing is to make sure the plant is growing on its own roots and is described as “disease resistant.”

Ramblers take up room — a lot of room — whereas climbers come in different sizes. Some throw out canes a mere 6 inches long, while others produce canes considerably longer. Again, you must do your research.

Do I recommend one type over the other? Absolutely not. Rambling roses are closer to the species roses — the roses that arose on their own — and consequently take less care.

Both groups are worthy of our attention. If you choose wisely, each will make you very happy.

Be the first to comment on "Climbing Versus Rambling Roses"