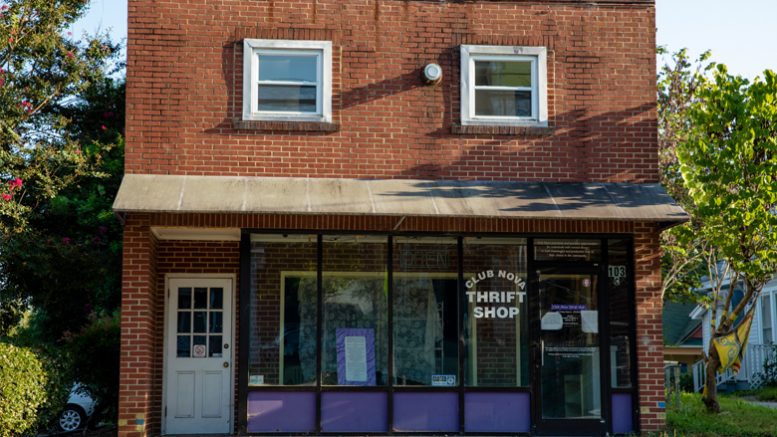 With reduced revenue, a shuttered storefront and supportive hugs limited to LCD screens, Club Nova has endured a slew of obstacles since the start of the coronavirus pandemic.

The club, based in Carrboro, serves more than 100 community members with serious mental health issues. It provides psychiatric, medical, social and financial services structured around work and relationships. But meeting the needs of its members has proven particularly difficult at this time.

“I mean it’s a whole level of emotional stress that’s hard to describe,” said Club Nova Executive Director Karen Dunn. “First and foremost was initially making sure all of our members got into some type of rhythm to make sure that everybody was taken care of and had what they needed.”

There is nothing, Dunn added, “that can describe that level of anxiety and panic and fear” club members have felt. Minimizing panic, she said, has been the bulk of her and her fellow staff members’ jobs during the pandemic.

The national Centers for Disease Control has pointed out that the coronavirus may be stressful and can induce “fear and anxiety … that can be overwhelming.” But the new pandemic can be much worse for those who already have mental health issues.

According to a recent paper from the Centre for Evidence-Based Medicine, people with mental illness are at “increased risk of contracting COVID-19 and have worse outcomes following infection.” Existing research, the paper said, also “points to greater psychological distress during the pandemic for people with [mental health issues].”

Club Nova continues to offer home visits and meal delivery, and it has shifted its traditional work-ordered day to a virtual clubhouse with working groups — spearheaded together by club and staff members — and socials through Zoom.

“We have a part of the program called Reach Out,” said club member Nancy Phillips,

“Where members and staff call other members who are more isolated and can’t get here and talk with them. We do that when people have been away for a while — when we are meeting in a physical space — and people are in the hospital.”

The club plans on continuing the virtual get-togethers post-pandemic, for those who can’t attend, to remain involved. But, said club member Lauren Butler, she misses the clubhouse culture the most since the transition to a virtual platform.

“I have pre-existing health conditions that make me more susceptible to catching COVID-19,” Butler said. “Since this pandemic and me not being able to go to Club Nova on a regular basis, it makes me want to be there even more. I’ve been more depressed and lonely and not as productive as I was when everything was normal. So, I’ll be looking forward to some of those things that help me keep in a better fit mental condition.”

In addition to the emotional stress of the pandemic, the club has had to deal with a financial crisis as well. The club’s average revenue has dropped between one-third to half on a month-to-month basis. It’s a terrifying reality, said Dunn, that prompted her to apply for relief funds at local and national levels.

In April, Dunn glanced at an apparent phishing email from The Kenan Charitable Trust, a long-time funder of CN.

Out-of-the blue, Dunn said, “Kenan Charitable Trust gave us $50,000 toward operations to spend between now and the end of June 2021.”

Even with the donation and smaller emergency funds, the club decided it wouldn’t keep open its thrift store on West Main Street, the heart of the operation for the past 18 years.

“It’s not the same without the thrift shop,” said club member RJ Zibaie. “I really wanted to use my customer service skills there at the thrift shop. I was kind of distraught when I found out they were closing down.”

The club announced the closure of the shop on social media Monday, out of concern for members’ health. According to program generalist Ruth Burnett, who coordinated the thrift shop for the past decade, reactions to the closure from members ranged from sadness and anger to  optimism.

“Some (members) are scared because they see things going up,” Burnett said. “Their rent goes up, and now they don’t have somewhere where they can shop at discount prices that they could get here, because we had what was called membership half price day on Wednesday. Change is not easy for anybody and I will say that for me too. I mean, especially the older you get, change gets difficult but sometimes change is necessary to make way for something more.”

CN is scheduled to begin construction on a larger building at its current location in 2021. The club will continue its operations out of the Old Town Hall for the remainder of 2020 until construction is completed.

“This [thrift store] allowed the public to come in, and the public got to see one-on-one, in real life and real-time, people with mental illness working together and doing something together,” Burnett said.

“And it gave people a chance to get to know some of them. We had some customers that came in here, that became very good friends with some of the members and they would do nice things for them. This thrift shop really opened up the surrounding community to come into Club Nova and learn more about mental illness and how we operate here and what we do.”

The shop also brought in a lot of volunteers,” Burnett said. “Because they would come shop here, and they found out what we were doing. … It was like the opening door for the rest of Club Nova to the public.”

Despite the difficulties caused by the pandemic, Burnett said she holds to a motto that has guided her through her life for Club Nova: “We’ve been wounded by a lot of stuff coming down through this in the past few months, but we are still standing.”