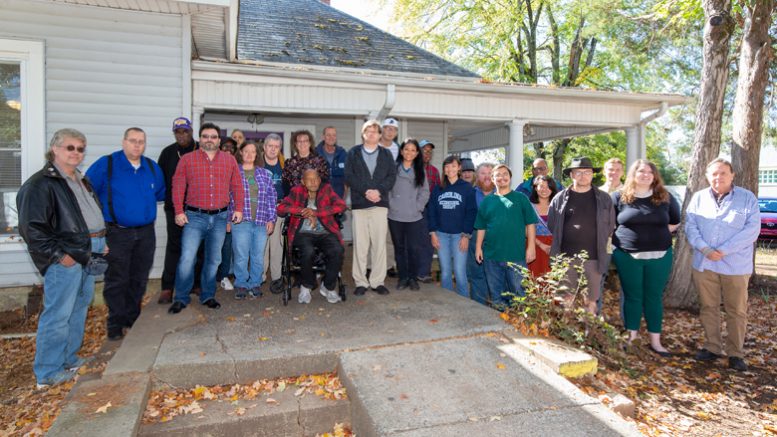 Mental health is one of the most important issues of our time. Whether you suffer, have suffered or know someone who does, it affects us all.

While statistics tell us that one in four people experience a mental health condition, in reality every one of us knows somebody who has or does.

Dignity is easy to take for granted. It’s something we expect will be afforded us when we come in contact with the government, a healthcare system, or even strangers on the street. After all, don’t we deserve it? Sadly, it is not always forthcoming.

But there is one local organization where respect and dignity are at the heart of their mission.

A nonprofit community center serving adults with serious mental illness, Club Nova will unveil its campaign to raise $4.4 million to build a new Clubhouse in Carrboro on Wednesday, March 18, 5:30 pm, at SPACES at East 54 in Chapel Hill, 1011 Hamilton Road. The public is invited to attend.

Club Nova plans to break ground on its Clubhouse in late 2020 or early 2021. The 9,000 square foot facility will be built at 103-D West Main Street, Carrboro. It’s on the site of the current Clubhouse, which is more than 100 years old and inadequate to meet the needs of Orange County residents who need community-based mental health services. Former Senator Ellie Kinnaird, co-chair of the capital campaign, emphasized the benefit Club Nova brings to our community. “We save money every year helping people stay healthy, from becoming homeless, and averting hospitalization for mental health crises,” Kinnaird said. “It’s really a great value for the community, and we want to expand our service to more members.”

Club Nova’s Numbers Tell an Important Part of the Story

Homelessness
25% of the nation’s homeless people live with mental illness;
0% of Club Nova members are homeless.

Incarceration
64% of those in local jails throughout the US live with mental illness;
0% of Club Nova members have been incarcerated in the last 5 years.

Employment
15% of those living with mental illness in the NC are employed;
33% of Club Nova members are employed.

Cost-effectiveness
Club Nova saves the community an excess of $1 million a year by keeping people out of jails, psychiatric hospitals, and homeless shelters. It serves a single member for an entire year for less than the cost of a single week of psychiatric hospitalization.

And there’s an even broader impact: it helps families, it relieves our legal and judicial systems, as well as the UNC Health Care Emergency Department.

Services provided are in person. They are not remote or virtual. With 117 active members and 45 members per day in the current facility, things are very tight. The crucial need now are funds for the new Clubhouse. Only with an expanded facility can we serve more of the estimated 5,000 people in Orange County who are living with mental illness.

The National Alliance on Mental Illness, the nation’s largest grassroots mental health organization dedicated to building better lives for the millions of Americans affected by mental illness, reminds all of us the importance of Hope, Inclusion, Empowerment, Compassion and Fairness. “I was at Northwestern University when I was diagnosed with a serious mental illness. For the next 22 years, I lived with chronic mental illness, going without a treatment that worked very well. Then, in 1994, two great things happened. First, I started taking a new research drug that really worked, and second, I joined Club Nova. Now I’ve known sanity in the process of mental health recovery. With Club Nova’s encouragement, I went to college part-time at Durham Tech and earned an associate of arts degree. Then I went to UNC part-time for two years, majoring in psychology, but was unable to attain a degree. In 2013, I moved into my own apartment behind Club Nova, where there is always support.”

Believe in the possibility of recovery, wellness and the potential.

Club Nova Campaign to Build a New Clubhouse in Carrboro

The public is invited to attend.

How Free Transit Works in Chapel Hill and Carrboro