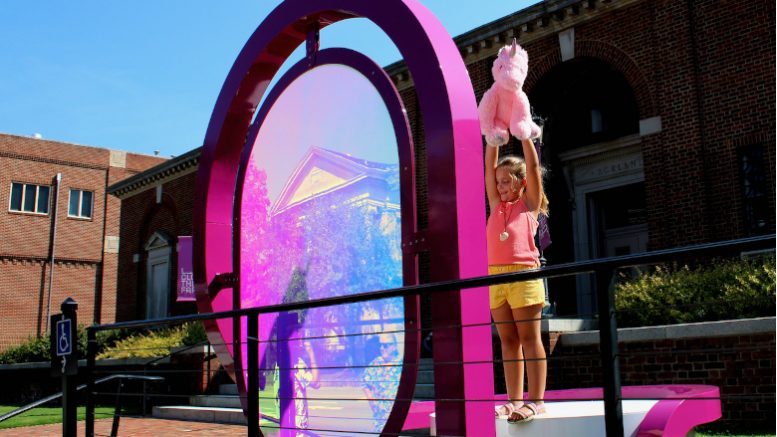 Vera Albritton, age 7, is delighted to play on pARC. The interactive exhibit on display at the Ackland Art Museum Terrace on July 24. Photo credit: Michelle Cassell.

What is bright and shiny, 800 square feet in dimension and 14 feet tall, changes colors from magenta to pink to aqua, and all the colors of the rainbow — depending on the light — that sits near the corner of South Columbia and Franklin Streets and beckons you to come and play?

The answer is pARC, the latest outdoor art display on view at Ackland Museum’s Terrace Gallery — designed to uniquely and interactively bridge the museum to the street. pARC the interactive art display at Ackland Museum Terrace. The display will be there until July 2024. Photo credit: Michelle Cassell.

“We are very excited about pARC,” said Turner. “From the 10,000 UNC students who take part in classes each year at the Ackland to the participants in our programs for families and children, community groups, and countless passersby, I hope everyone will take time to explore and pARC and make it their own.”

Seven-year-old Vera Albritton could barely contain her excitement as she recently danced on the platform behind a reflective panel and waved her pink unicorn in the air.

Ryan Swanson, the founder of Urban Conga and lead designer of the pARC project, was in the company of a filmmaker last weekend as he chronicled a pARC-inspired movement workshop led by choreographer Killian Manning. The workshop featured musical guest Daniel Levin on cello.

Swanson, along with his wife and fellow architect Maeghann Coleman, are integral members of the Urban Conga team working on the pARC project.

“We fabricate everything in-house,” Swanson said. “So, we are welding it, we are putting it together, and we are installing it, which I think doesn’t often happen in producing public art at this scale.”

“The big driver in this was we had a series of discussions with the Ackland and stakeholders at the Ackland also with members of the community, to figure out what this would become,” Swanson added.

One year ago, designers Swanson and Coleman visited Chapel Hill in the early preproduction phase of the art installation.

“I didn’t know what we would make, so we listened to the conversations about what people wanted to see,” Swanson said. “The primary issue was getting people into the Ackland, was what we heard. How do you get people over this invisible barrier to enter the art institution and experience the amazing things happening inside?”

This detailed field research led Urban Conga to develop different concepts, which they presented to the Chapel Hill and Carrboro community via an online community session to gather input from residents.

Urban Conga’s idea was to create an attraction to passersby by creating a multi-programmable space as a platform for folks to come inside. The arches in the design are reflective of the doors into the museum, Swanson said.

Coleman said she saw the project as a way to redefine the word “play,” so she endeavored to break down barriers between spectators and the public art installation — creating designs that invite people to interact with the art and one another for the greater purpose of building community.

The programmable space works based on how the sunlight hits it at any given point during the day. Color changes are based on the way that’s reflected.  Observers will see a series of colors displayed —  from oranges to pink to purples — which creates an interactional effect on the viewer.

Observers will experience backlighting that hits the display at night. The installation’s designers used a series of four different colored lights to create a color trail. On one side, observers will see the shadow. On the other side, passersby may start seeing this color trail of color mixing. As observers pixelate themselves from behind and move their arms, they can see those colors merging.

“It is made out of aluminum and then powder-coated,” Swanson explained. “We usually try to look at using recyclable materials, aluminum, and then we use the recyclable polycarbonate paneling for the three different panels. And then on that is a film coating that allows for that color-changing effect to happen.” Founder and designer Ryan Swanson of Urban Conga with his interactive art display to be explored at the Ackland Museum Terrace from now until July 2024. Photo credit: Michelle Cassell.

The display was installed in a day, said Swanson, or six hours to be precise. They brought it in modular pieces. Swanson and two others put the parts together.

“That’s another big thing with our work is we kind of developed it as a kit of parts,” he said.

The university poured all the concrete foundation for it ahead of their arrival, he added.

The Urban Conga studio is part of Swanson’s thesis in architecture school.

“During my thesis, I was less interested in designing buildings and more interested in how people utilize the spaces around the buildings,” he said. “And at the time, I was living in Tampa, Florida, and it was a very nine to five city with a lot of underutilized spaces happening within it, these in-between spaces that weren’t used.”

With that inspiration, Swanson said he mulled the question: How do we activate those spaces through temporary installations? That is where the idea of the urban conga blossomed.

“At that time, the ‘play’ wasn’t a part of the vocabulary,” he said. “It was more like, how do I create these cool installations? We were broke college students. How do I put this stuff out there that allows for activation, but we don’t have much money?”

According to Swanson, he and his Urban Conga collaborators created interactive projections on buildings, and they started to see relationships associated with the concept of “play”.

“That’s where I envisioned the power ‘play’ had and bringing people together,” he stated.

Swanson and his highly successful Urban Conga team are touring with a display internationally and have projects in Pittsburgh, Sarasota, Florida, Upstate New York, Albany, and Indianapolis.

pARC will be on display at the Ackland Museum’s Terrace Gallery until July 7, 2024. Check ackland.org for ongoing information about events and exhibitions.

Be the first to comment on "‘Come and Play’: Ackland Art Museum Invites Visitors to Interact with Public Art Exhibit"