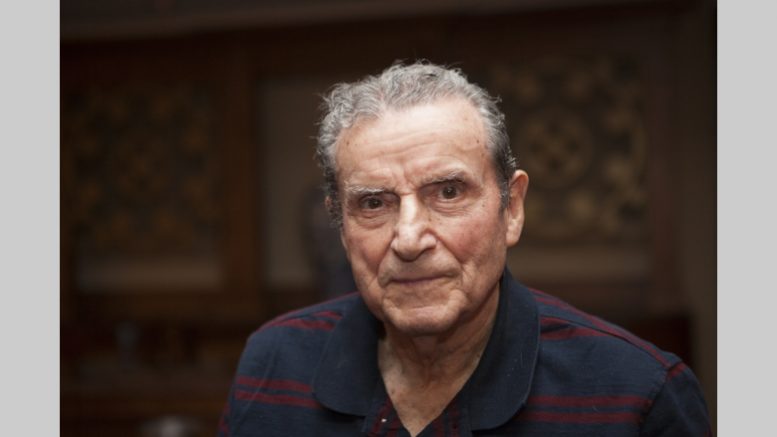 When visitors would ring the doorbell at Everett “Bud” Hampton’s split level in Briarcliff where he’d lived for nearly half a century, they’d hear the strains of “From the Halls of Montezuma,” the Marine’s hymn.

Hampton served as a Marine for 26 years, enlisting in WWII as a buck private. He received a battlefield promotion to 1st lieutenant during the fight to take Iwo Jima. He was the only member of his company to survive. He’d no sooner completed his G.I. bill-funded degree at UNC when the Marines called him back to the battlefield, this time to fight in Korea. He retired with the rank of major and settled into a comparatively calm second career as business manager of the surgical department at UNC Hospitals.

Hampton died May 13. He was 97 years old and one of the few remaining WWII veterans in Chapel Hill. He was predeceased by his wife and two children.

Born and raised in Kannapolis, Hampton was one of five brothers who served in WWII. Among them, they covered all three branches of the military. All five boys came home from the war alive, although Bud was wounded twice and received two Purple Hearts, as well as a pair of Bronze Stars.

A proud Marine, Hampton belonged to American Legion Post 6 and Veterans of Foreign Wars Post 9100, and he served on the Orange County Veterans Memorial Committee. He traveled with other local vets to military reunions on both sides of the ocean. He dedicated a room in his house to WWII memorabilia. He recorded some of his war stories as part of an American Legion project. Listen at: https://www.chapelhillpost6.com/about/our-heroes/major-everett-bud-hampton-usmc-ret/.

In 1962, the director of the film The Longest Day boarded the ship Hampton was serving on off the coast of Corsica to film some landings. Hampton was proud of his role in re-creating the scenes, and he was given the director’s chair in appreciation.

In 1984, Gov. Jim Hunt inducted Hampton into the Order of the Long Leaf Pine.

The public is invited to pay their respects Thursday, May 20, 12:30-1:30 p.m. at Walker’s Funeral Home, 120 W. Franklin St. in Chapel Hill. The graveside service will begin at 2 p.m. at Chapel Hill Memorial Cemetery on Legion Road.

Is Traffic Worse, Better or the Same? All of the Above.

Be the first to comment on "Community Mourns WWII Vet"