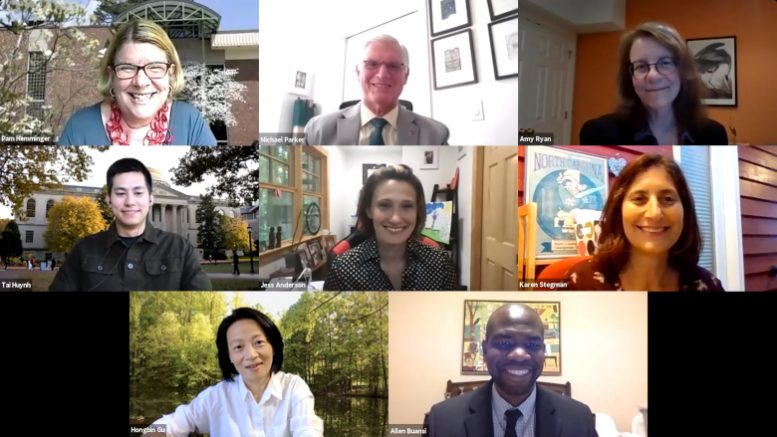 Chapel Hill Town Council held its final public hearing on the Aura proposal on May 26. I ‘attended’ and was a guest speaker at that meeting (via Zoom). I shared with the council my perceptions of the safety issues on Estes Drive over the past 10+ years that I have lived on that road. I recalled the time I invested during the Central West planning process as well as my continued disappointment over the ensuing years as the promised road improvements kept getting pushed back and pushed aside again and again.

Then, several years later, the Azalea Estates project was built BEFORE the road improvements, even though that was promised not to happen. And now, there is the prospect of Aura, which is poised to obliterate any and all improved safety and easing of traffic congestion just at the moment when the long-planned improvements to the section of Estes Drive between Caswell and MLK are scheduled to begin.

At this final council meeting, I was disappointed — and even embarrassed — by the tone of the council members in their conversation with the developers. So deferential. So meek. So apologetic. Almost as if it is WE who must please THEM. Almost as if council does not realize what an asset their own town is. Why is council seemingly willing to serve this area of town up on a silver platter? I have never witnessed such feeble negotiations!

Any number of times when data-driven concerns were brought forth, the developer’s rep brushed them aside, and council said: OK, thank you very much.

Any number of times the developer’s rep presented standard expectations as little gifts to the town, and council said: OK, thank you very much.

When a council member questioned the number of affordable units, a matter of simple math, she was so apologetic that her voice increased in pitch and trailed off before the end of her sentence to such an extent that she can barely even be heard in her apologies.

When the developer’s rep contended that planters on the roof of parking garage would provide shade, council said: OK, thank you very much. Have planters on a rooftop ever provided shade?

Despite a clear need for a traffic light near this development, DOT clearly stated that it cannot at this time (or any time in the foreseeable future) guarantee a stoplight in this vicinity. The refrain from council once again: OK, thank you very much.

I have spoken respectfully on these topics for many years. But honestly, after the behavior that I witnessed at the May 26 meeting, I am losing respect for this council.

Council and mayor, we deserve better from you. This developer deserves NOTHING from you. You all seem to keep getting these facts backward.

Come on, council and mayor. It is high time you did the right thing for your town here. There will be other developers, and there will be other proposals. Development in this area is welcome! But it must be development that is true to the values and character of this area, protective of our vulnerable natural resources and that makes good on our commitment to keep these young people safe as they attend school. I know where my priorities are. Do you remember where yours are?

Megan Foureman is a nurse anesthetist who has lived and raised her children on Estes Drive for more than a decade.

2 Comments on "Council and Mayor: Where Are Your Priorities?"