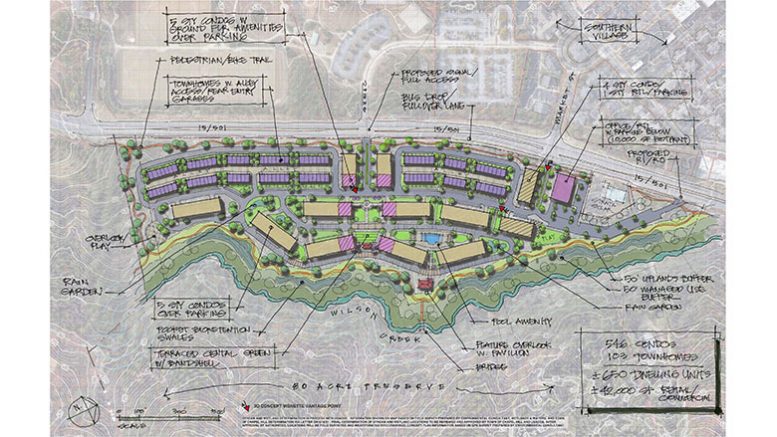 Council members met Wednesday evening to give feedback on a proposed housing project to be built on undeveloped land in southern Chapel Hill, across 15-501 from Southern Village. The proposed project would replace now-defunct Obey Creek, a large mixed-use development that was approved in 2015 but never got off the ground. Council members recommended a number of changes to the applicant’s plans.

A replacement for Obey Creek?

New York-based developer Beechwood Homes announced its plans for the roughly 120-acre project, named South Creek, in May of 2021. The project site runs along Highway 15-501 and Wilson Creek bisects the parcel.

The concept plan presented before the council Wednesday evening proposed a mixed-use development of up to 650 dwelling units along with retail and office space.

Interim planning manager Corey Liles gave an overview of Beechwood’s current design, which consists of a mix of townhomes and condos that range in size from 800-2,000 square feet and would include some seven-story structures. The plans also include various public amenities and, on the east side of the creek, a nature preserve.

Lee Bowman, a local land development representative for Beechwood Homes, ballparked the price for the homes at between $300,000 and $700,000. He added there are plans to offer housing units priced to be affordable to those earning 60% to 80% of the area median income (80% AMI = ~$58,000 for a two-person household) per the Town’s inclusionary zoning ordinance and advisory board requests.

“Our goal really is to hit that missing middle [the council] talked about and identified in a couple of different studies here recently,” Bowman explained. “They’d be one-, two- and three-bedroom townhouses and condominiums, targeting a wide range of incomes. Young families, divorcees, empty nesters.”

Project architect John Oxenfield stated the design of South Creek is meant to be compatible with the local Chapel Hill vernacular architecture. He said the buildings are drafted in a classical North Carolina Piedmont style while having one foot in the future to create a “timeless, yet modern aesthetic.”

Should Beechwood Homes secure a development agreement, South Creek would replace the Obey Creek proposal the Town previously approved in 2015. The latter 1.6-million-square-foot project shuttered when the developer was unable to sign enough retail tenants to begin construction, the News & Observer reported. The N&O also reported that Beechwood Obey Creek LLC — a Beechwood Homes subsidiary — paid over $7 million in August to purchase the land from its former owners, Obey Creek Ventures LLC.

During the public feedback portion of the presentation, several citizens raised issues with the proposed design. Celie Richardson, a resident of the nearby Southern Village neighborhood, called the design more appropriate for somewhere like San Francisco or Miami.

“What those renderings do not show is that this big city kind of project is surrounded by low-rise, single-family wide-price-range neighborhoods,” she said. “This [design] is inappropriate. It needs to be slowed down and toned down.”

Rebecca Vidra, an environmental sciences professor at Duke University, took note of the slope that housing units would be built on. She said the Town needs to understand the area is incredibly steep and construction has the potential to impact the environment.

“When you dig into slopes and you build, you cause an incredible amount of runoff which the stormwater advisory committee, I’m sure, has their eyes on,” she stated. “Once the development is done, you’ll continue to have run-off. So you have increased water and increased contamination. All the water pollution and all the contaminants from roofs and driveways and roads are going to be basically rushing and cascading down into Wilson Creek.”

Vidra urged the council and the developers to ensure adequate riparian buffers are included if the project moves forward.

Council member Amy Ryan encouraged Beechwood Homes to refine its vision for the project and suggested conceptualizing the 15-501 corridor as more of a boulevard and not a highway. Council member Jessica Anderson asked the developers to better define the target homebuyer.

“What we’re looking for is middle income [housing]. We’re not looking for a housing typology, but an income level,” she said.

Councilperson Michael Parker also asked for a better sense of place, so that all the buildings do not seem to have been “built in the same week.”

“[There’s a] stark sort of separation of townhomes from taller buildings,” he said. “I would like to see more of a mix to create more variety so that the townhomes maybe are more intermixed with the condo buildings, rather than having it be effectively two separate developments joined by the street.”

Councilperson Tai Huynh encouraged Beechwood to consider adding live/work units, which he thought might prove attractive given the proposed location.

Other business handled during the meeting included:

Whither Development in our Chapel Hill neighborhood?