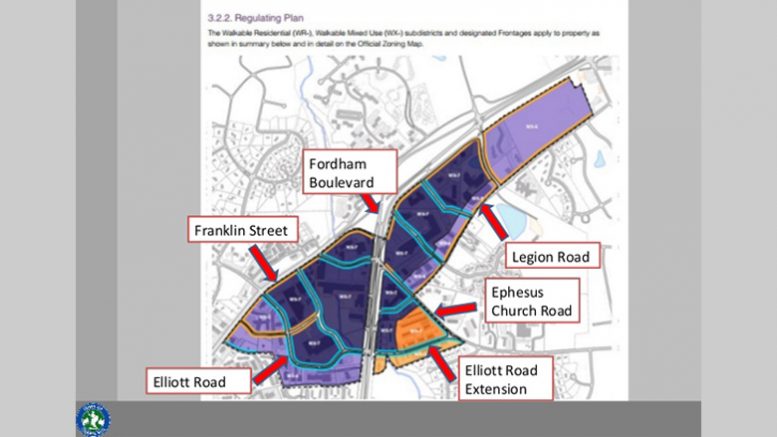 Despite a rising price tag but with little apparent choice, the Town of Chapel Hill is going ahead with plans to extend Elliott Road.

The controversial extension was given the go-ahead at a special Zoom meeting July 29, when the Chapel Hill Town Council voted unanimously to approve a contract for extending Elliott across Fordham Boulevard to connect with Ephesus Church Road.

Elliot Road Extension will primarily serve the development that will replace Park Apartments by creating access to apartment buildings that will be constructed on either side of the new road.  The extension, planned in 2015, originally was budgeted to cost $2.6 million, but then that price rose to $4.2 million at the beginning of the design level and finally reached $7.5 million at that level’s completion.

However, the recent contract re-bid came in at just over $6 million, not including the additional cost for interest on the money to be borrowed by the town to pay for the road or the half million dollars that town staff will spend supervising the project.

“What can be our lessons learned so we are not signing agreements that may not be accurately reflecting what the costs will be?” council member Jess Anderson asked. Town Manager Maurice Jones replied that the council will be updated more frequently in the future.

Approximately $1 million of the increase was due to the addition of a new roundabout suggested by former council member Ed Harrison.  Staff told the council that changes to the road were requested by the developer, Blue Rock Real Estate, at the early design stage and that road construction will be “coordinated with the developer” even though the Town of Chapel Hill will bear the entire cost.

During the meeting, Chapel Hill Mayor Pam Hemminger asked whether “we are contractually obligated to build the road.”

“I think we are pretty much obligated,” Town Attorney Ralph Karpinos pointed out. “It would be very difficult to not build this road.”

After Karpinos spoke, council member Hongbin Gu wanted to know, “if that is the only option, why do we even vote for this?”

Karpinos replied, “that’s the kind of conversation I think would best be suited for closed session. I don’t think it’s to the council’s advantage to have these comments in a public setting.”

Not approving the extension could have opened up the town to a potential lawsuit from the developer. In August of 2018, the town signed a memorandum of understanding with Blue Rock to provide the new road. With the approval, Jones can now take the next steps to borrow the money for the road’s construction.

There are, however, additional concerns about the extension. The Ephesus-Fordham traffic study, https://bit.ly/3ivWg5Z, did not model the specific benefit of building only this new road. The model for what traffic would look like in 2030 only shows that if several dozen recommendations by the consultant were to be built, traffic flow on Fordham Boulevard could be maintained at conditions no worse than those in 2017 when the modeling was done.

Those recommendations for 2030 total more than 25,000 feet of new lanes of pavement, costing around $50 million, and include two additional Super Streets on Fordham Boulevard, like the one at the Europa Drive intersection.

But no improvements for through traffic on Fordham Boulevard are in any plan for a number of years due to NC Department of Transportation priorities and financial troubles at the agency. The value of the Elliott Road Extension for motorists then likely would be limited to a slight improvement in congestion only for Ephesus Church vehicles traveling west toward Fordham Boulevard since there would be a choice of two places to intersect with the boulevard.

The location of the extension also may be problematic for another reason, suggested local activist and previous council member Julie McClintock. At the virtual meeting, she asked about the wisdom of building a road in a floodway with “culverts designed for a fifty-year flood” — even though many recent storms have exceeded that level.

Any damage to the culverts and/or the road by flooding would create significant repair costs for the town, McClintock suggested, which was what happened in 2019 for repairs to the existing culvert under Elliott Road near the Burger King. The new culvert would be designed to handle a less-intense flood that existing nearby culverts.

McClintock pointed out that flooding exceeding culvert capacity could result in flooding upstream back to the Mariakakis strip mall and then to Eastgate Shopping Center. Downstream flooding could impact the Little Richfield neighborhood and surrounding areas.

Acknowledging that there was a contractual obligation to build the extension, McClintock asked, “What do you do when a former council made a mistake?”