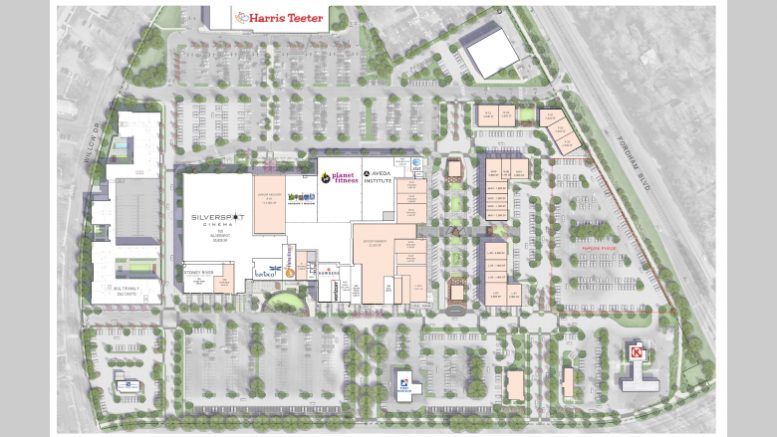 The Chapel Hill Town Council could decide the fate of a potential redevelopment of University Place mall this month. The public hearing resumes at the council’s May 5 meeting, and staff have recommended continuing to hear evidence on May 19.

Ram Realty Advisors originally proposed the redevelopment of University Place on Aug. 27, 2019. The plan involves revamping the mall by turning it into an outward-facing retail space combined with offices, a hotel, a multi-use path and apartments.

Ram is seeking a special-use permit modification — and not form-based code — which will allow the developer to not only renovate the existing building in University Place but to make buildings smaller or larger and to add new buildings, said Ashley Saulpaugh, Ram’s regional director of investments for the Carolinas.

If the redevelopment is approved, Phase I would begin in early 2022. This would entail demolition of 100,000 square feet of the existing mall, which would be the space that was formerly A Southern Season, as well as some of the interior mall around it.

“So, [for] that first phase we’re proposing a total, including what’s there today and what will remain, of about 350,000 square feet of retail,” Saulpaugh said.

However, there are still tenants in University Place, so the demolition process will be slower. But Ram hopes the interior mall tenants will transition to the outward-facing stores once Phase I is complete.

The second component of Phase I involves the large parking lot on the Willow Drive side of the mall. Saulpaugh said Ram is planning for 250 new apartments and a small retail space, which will be incubator retail, in the current parking lot. Incubator retail allows start-ups to launch their business by providing space for lower-than-average rent and little upfront costs.

“What we’re seeing, at least in our project that delivered, which is The Elliot Apartments right up the street from University Place, the lease up has been really strong just because there is that pent-up demand,” Saulpaugh said. “So, it’s sort of shown that there is a market for more multifamily housing, just based on the demand that’s out there today.”

Saulpaugh added that when people hear new apartments are being built, they tend to worry how it’ll impact traffic and schools. But he said that the many renters at The Elliot Apartments already work in Chapel Hill and tend not to have children.

The developers’ statement reads: “The proposed redevelopment of the University Place Mall will not have a detrimental impact on surrounding properties. The proposed improvements will help create improved gathering spaces, upgraded landscaping, and more modern facilities and uses which should be beneficial to the surrounding properties and the Town of Chapel Hill as a whole.”

Some nearby residents have voiced skepticism about that statement. Rita Thissen of Briarcliff is among those who would like to see the mall redeveloped but worry about everything not mall-related that the redevelopment will entail.

“You have to look at what is the definition of negative impact the developers are using,” she said. “I suspect that the developers’ factoring in quality of life would be quite different from the factoring in of the interests of the town and the neighbors.”

Kim Stahl of Little Ridgefield has followed the project closely and weighed in at community meetings.

“My primary concern is the rezoning would just give them basically free rein to build out to the edge of the property and straight up to a mass and scale that we, the people of Chapel Hill, do not want,” she said. “The things that the town does want, and that we’ve articulated in a lot of planning, really are in conflict with what this developer intends to do.”

Thissen said Chapel Hill has attempted as a town to preserve a character of attractiveness, nature and friendliness to families, pedestrians and bicyclists.

“All of those things come into play when you look at the University Place area,” she said. “It has an impact on the sort of human geography of the area, because runoff and floods and water management is a concern as an impact on family life.”

“With all of the new buildings that are proposed, and with the existing buildings that we’re going to be renovating, all those buildings will actually include flood-proofing,” Saulpaugh said. “They’ll have protective flood barriers, which don’t exist on the majority of the buildings out there today.” On site, the apartments on the Willow Drive side will be elevated.

Much of the residents’ consternation regarding the proposed redevelopment stems from the situation with Blue Hill, when developers used form-based code, promising mainly retail space with little residential and delivering the opposite.

“We don’t like what we have had in Blue Hill, so I don’t want to see that across the street,” said Stahl, who has lived in the mall area since 1997.

But since Ram will not be using FBC, Saulpaugh said residents shouldn’t worry about not getting what they were told was coming. Still, some folks are unsure, Stahl among them.

If the developers took to heart public input? “They could get a lot of support and do this really quickly and with a lot of cheers,” she said.