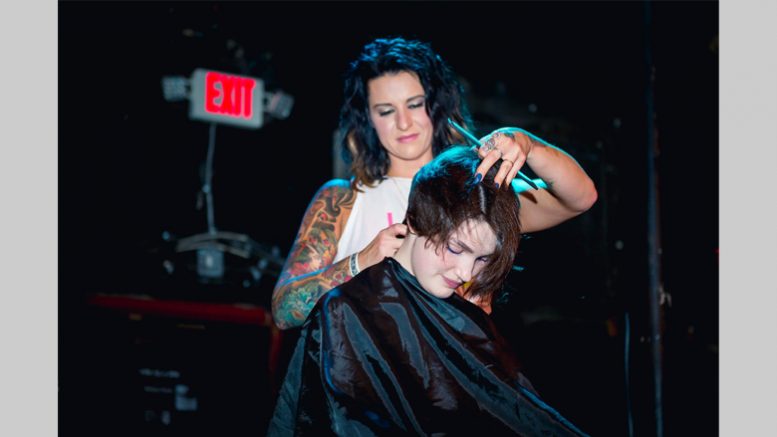 Participants in Orange County Rape Crisis Center's 2019 Punk Cuts to End Rape fundraiser receive a new look during the in-person event. This year, Punk Cuts was virtual due to the COVID-19 pandemic.

“We get volunteers from the community to set up fundraising campaigns that are connected to the rape crisis center, and they have to do an awareness-raising campaign as well as setting a fundraising goal,” Executive Director Rachel Valentine said. “They solicit those funds from their networks. Once they reach their fundraising goal, we treat them to a good punk haircut. And usually, it’s a big party that we throw at a local bar, and we ask stylists to come, and they do it on stage.” This year, Punk Cuts occurred virtually, and so will December’s auction gala. Valentine said the center is lowering fundraising expectations amid an at-least 20-percent cut in state and federal budget support.

OCRCC is one of many local nonprofits that have had to adjust their fundraising campaigns and operations due to COVID-19. The pandemic and the resulting economic crisis have put many nonprofits at risk nationwide. Nearly a third may be forced to close their doors within the next 12 months, according to a survey by the Charities Aid Foundation of America. But through creative adaptation, a number of local nonprofits say they expect to stay afloat. Frances Henderson, executive director of Dispute Settlement Center, said her organization raised almost $40,000 last year at a Glasshalfull wine tasting. This year, such an event is impossible, said Henderson. Still, DSC wants to avoid virtual fundraisers.

“I think people are maybe getting tired of that — I don’t know,” Henderson said.  “So, we’re trying to meet with our supporters and stakeholders and donors in small groups virtually to connect with them and find out their questions or give them updates.”

Meanwhile, DSC actually has seen an increase in demand due to unique stressors caused by the election and COVID-19.

“A group asked for us to do a training on how to resolve the conflict of customers who won’t wear masks,” Henderson said. “And …  we’ve seen an uptick in divorces because people are home together. We’ve done mediations on roommates who are trying to figure out protocols for safety and staying unexposed when they’re living in kind of group situations.”

Among other services, DSC provides mediation, facilitation, training and restorative justice. Although the center has shifted fairly smoothly from in-person meetings to a virtual model, Henderson said DSC has struggled to reach people who may not know about the services but need them.

Yet she isn’t concerned about DSC’s long-term existence.

“As a 40-year-old agency, I think we’ve been proved to be essential to the community, and we have a lot of good support,” Henderson said. “We can’t predict the end-of-year campaign, but we certainly plan to be here for a very long time.”

Valentine said similar things about the 45-year-old OCRCC. Unlike DSC, its fundraising challenges are not caused primarily by COVID-19.

“Fundraisers are actually a relatively small part of our budget, a very important part of our budget because it’s the money that doesn’t have strings attached to it, so we need that,” Valentine said. “But our funding definitely has taken a big hit. And some of that’s COVID related, and some of that’s more political. Our state and federal funding has taken a big hit this year. So, of course when that happens, you kind of have to lean into fundraising, and it’s a hard year to do that.”

Much of this can be done remotely, but services such as providing accompaniment to the courts or law enforcement appointments, must be done in person.  OCRCC has also had to suspend drop-in crisis counseling and its HIV and STI testing clinic. The latter will return next month.

“We’re prepared to do remote learning classroom presentations when they’re needed, and some schools are using that, but a lot of schools are actually opting out because of the safety concerns,” Valentine said.  “If the child’s abuser is their parents, for example, and they’re in the home, then opening up that conversation while that abuser is in the room could actually put children at more risk.”

TABLE, a Carrboro-based nonprofit addressing food insecurity since 2008, has ramped up its operations and received an outpouring of financial support, said Community Relations Director Suzanne Turmollen.

TABLE typically distributed weekend bags of food, which include meals, snacks and fresh produce, to 725 children weekly, at their schools.

Turmollen said they now deliver bags weekly straight to 676 children’s houses. The number of children served has decreased since some have moved or cannot be located. Despite this decrease, TABLE has increased the amount of food being distributed by 46 percent, Turmollen said.

“We were so happy with the outpouring of support from the community because it helped us sustain our operations and continue through the summer. With that said, there were a lot of food shortage issues,” Turmollen said. “So, when we might typically be able to order items in bulk, we weren’t able to when COVID hit. The stores, like Costco and stuff, weren’t allowing you to do that.”

TABLE responded by seeking the help of local restaurants who package the food into smaller containers. Although TABLE has not severely struggled, Turmollen sees financial challenges on the horizon with the coming holiday season.

“People typically donate a lot of food during the holidays. People have their holiday party and ask people to bring a can of food, and that won’t be happening this year,” Turmollen said. “So that could be a challenge, but we’re prepared for that ahead of time.”

This year’s Empty Bowls will take place in a to-go format. TABLE prepared meals for two to four people and asked donors to order tickets online. Tickets sold out in one week, and although Turmollen said the organization didn’t raise as much money as usual, it’s pretty close.

Cops in Our Schools: Are They Needed?