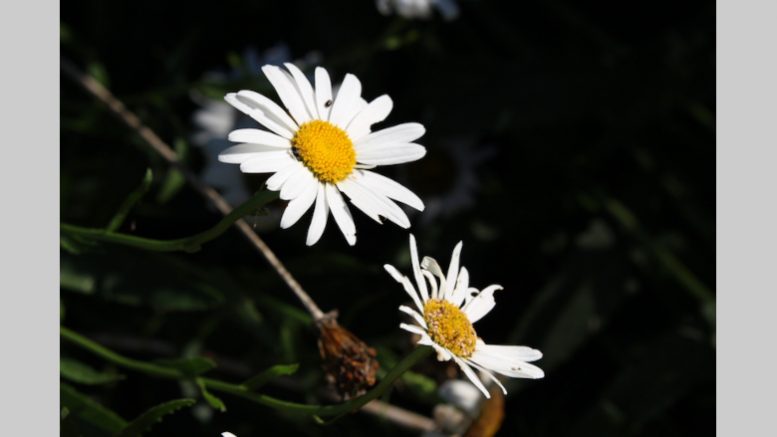 Recently, I have been marveling over the complexities of the common daisy. Daisies belong to the family Asteraceae, a family that contains more species than any other, with the possible exception of Orchidaceae. Found on every continent except Antarctica, Asteraceae species are defined by a flower that is actually two flowers in one: The sun disk attracts the pollinators, while the ray flowers surround the sun disk. In fact, daisies look so innocent that, in classical myths, they represented purity.

Daisies make up 10 percent of all the flowering plants. The name “daisy” is a contraction of “daes eag,” meaning “day’s eye,” which describes the English daisy’s habit of closing at night, only to reopen at daybreak. Who suspected that the innocent daisy was so complex?

However, the daisy can be a weed, so take care which daisy you plant. Leucanthemum vulgare, also called the oxeye daisy, conquers space through its creeping underground rhizomes. This daisy actually consists of three flowers, the sun disk surrounded by both ray florets and disk florets. Because this species is similar to the more desirable Leucanthemum x superbum, be sure to notice the flower tag at the nursery: You want the latter and not the former.

The other problem with the oxeye daisy is that one plant is capable of producing 26,000 seeds, which I think we’d all agree is an awful lot of seeds. Because a plant can regenerate from just a fragment of its rhizome, this has become a difficult weed to control.

Fortunately, Leucanthemum x superbum has conquered the weediness of L. vulgare. Called the Shasta daisy because the hybridizer developed the first one near Mount Shasta, Leucanthemum x superbum now has a cultivar for everyone: Becky, ranging about 2 feet in height, is widely available at garden centers. Newer cultivars include Snowcap, Daisy Duke and Whoops-a-Daisy. Because it’s shorter than Becky, I personally like Snowcap as Becky can totter at the first significant rainfall of summer.

Other daisies to consider are:

The great thing about daisies is that they can go anywhere in the garden, provided there is sun. Once established, these are durable plants that I never water.

So now, grab a daisy and begin to play, “He loves me, he loves me not.”

Herbs or a Bottle of Pills?

The Wild World of Geophytes

Be the first to comment on "Daisies: Surprisingly Complicated Flowers"