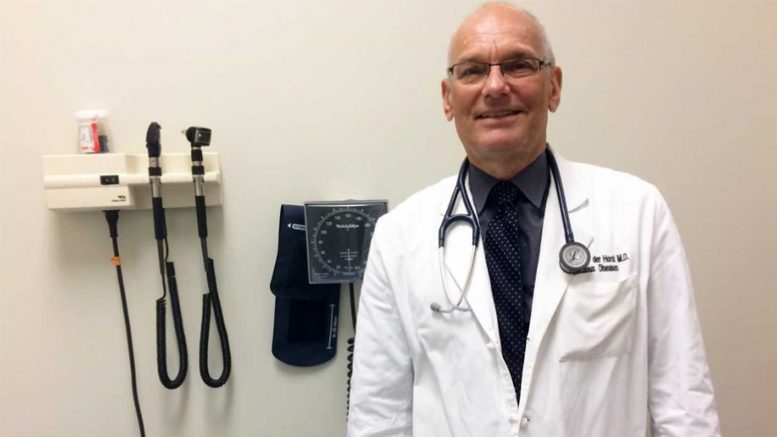 [Charles van der Horst, internationally known HIV researcher, esteemed medical professor at UNC-Chapel Hill, committed activist and community leader, died earlier this summer. Shortly before his death, during a marathon swimming race down New York’s Hudson River, van der Horst contributed the following opinion column to The Local Reporter. Perhaps the last article he wrote for publication, it is a fitting testament to the values he so clearly personified — empathy, passion for social justice, activism and an optimism that good will ultimately triumph.]

In 1852, a 41-year-old preacher, Theodore Parker, looked over a crowd of 2,000, members of the 28th Congregational Society of Boston, filling the Boston Music Hall. He had a genial smile, prominent bald forehead fringed with unkempt gray hair and piercing eyes.  Parker was involved in all the reform movements at the time, including peace, education, the condition of women, prisons and the poor.

But his chief focus was slavery and abolishing it immediately and without compensation to the slaveholders. By protecting runaway slaves, he actively flouted The Compromise of 1850, which permitted slave owners to capture their escaped slaves in free states.

Pushed out of the Unitarian Church for his views, he and his congregants created the new group. Every prominent abolitionist, black or white, was a member, including William Lloyd Garrison, Elizabeth Cady Stanton, Julia Ward Howe and her physician husband, Samuel Gridley Howe, and Louisa May Alcott.

Despite the ongoing struggle over slavery and the increasing tension between southern slaveholders and northerners, Parker was optimistic. “I do not pretend to understand the moral universe,” he said. The arc is a long one, my eye reaches but little ways; I cannot calculate the curve and complete the figure by the experience of sight; I can divine it by conscience. And from what I see I am sure it bends towards justice.”

Of course, he was prescient, albeit nine years early. A blood-drenched war of four years, which claimed the lives of 620,000, paved the way for the 13th (outlawing slavery), 14th (equal protection and due process) and 15th (right to vote) amendments to the U.S. Constitution.

A century later, in 1956, following the conclusion of the Montgomery bus boycott, Martin Luther King, Jr. echoed these words, “The arc of the moral universe is long, but it bends toward justice.”  Despite all the hate, the murders, beatings, rapes and lynchings, despite the vicious battles over integrated housing in the north, King had faith in the power of people to push against all odds to bring forth justice.

For many, since Nov. 8, 2016, the news has become a source of despair, whether focused on Trump’s Tweets or the flurry of new rules and regulations systematically harming the environment, our schools and universities, our health care, our foreign policy, our press and our rights.

If you are like me, you watch rom-coms instead of The NewsHour, listen to “Don Giovanni” instead of Morning Edition, and doubled your exercise hours, all in an effort to remain sane.

But remember where we have come from. It is easy to forget that 60 years ago African Americans were in the back of the bus, women were in the kitchen and gays and lesbians were in the closet.

Throughout our history, we have overcome huge hurdles to achieve social justice. The rights obtained by these groups came because we have a system of a free and independent press, the rule of law and a functioning democracy. It also required a persistent and single-minded focus on protests, lawsuits and, unfortunately, through the blood of many who bravely fought to bring us to this point.

In North Carolina, the Moral Monday movement led by the Rev. William Barber generated publicity, which shed light onto some of the harsh legislation enacted by the state legislature. This movement, a coalition of more than 100 groups, achieved this success by concentrating on key issues that they all agreed on, ignoring those that they disagreed with, and combining voter education and registration, protests and acts of civil disobedience.

The success is evident: In the elections of 2014 and 2016, when Republicans were taking seats from Democrats in most other state legislatures, North Carolina Democrats took back seats. Even though Trump won North Carolina by 173,000 votes, we elected a Democratic governor and attorney general and a progressive African-American Supreme Court Justice.  Through the hard work of nonprofit groups such as the NAACP NC, the ACLU, the Southern Coalition for Social Justice, the Southern Environmental Law Center, Planned Parenthood, Common Cause and the League of Women Voters, law after law passed by our legislature has been struck down as unconstitutional, either in state or federal courts.

In dark times, Parker, King and Barber responded with leadership and action. As onlookers, we should stop moping. Stop clicking like or angry emojis. Stop fighting with people who should be your allies. Educate the young about the issues, carry a clip board with blank voter registration forms with you at all times and register voters. For every person you register, I’ll allow one emoji. OK?