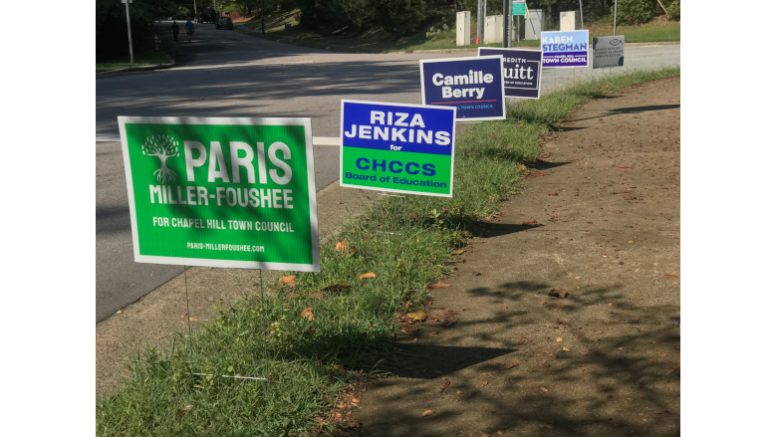 The current municipal election in Chapel Hill/Carrboro is déjà vu all over again, as New York Yankee’s catcher Yogi Berra once famously said.

The core issue in this year’s non-partisan election for the Chapel Hill Town Council and Mayor seems to be development versus greenspace. For more than 25 years, this is what stirs debate – and motivates the tiny percentage of voters (about 13%) who turn out in these elections.

Three decades ago, the focus was on two large developments – first Southern Village and then Meadowmont. Both stirred angst because they were entryways to Chapel Hill and the proposed number of dwellings seemed overwhelming.

Meadowmont was especially troubling because we all loved the beautiful meadow that greeted us as we came into town on Highway 54. Similarly, it was hard to imagine so many houses on the large tract of undeveloped woodland that is now Southern Village.

A vocal group of citizens were against the proposed dense developments and mixture of apartments, townhouses, small lots and a town center. They wanted to preserve the lovely meadow, open spaces and forests. But that wasn’t feasible. The reality was the land would be developed, one way or another.

My husband, James Protzman, in his first term on the Town Council, worked to make Meadowmont a model for beautiful, responsible development. But he was seen as a business owner and was opposed by those fighting against “Meadowmonster.” He argued that since the land would be developed, the town should embrace density that included a broad range of mixed uses — a business center, affordable housing, multi-family properties, and spaces designated for schools and parks. The alternative was big houses on big lots that only the very wealthy could afford.

James voted for Meadowmont and lost his seat on the Council in the next election.

I’m afraid the same kind of dynamic is at play in the current election. A much smaller proposed development, Aura, on the corner of MLK and Estes, has generated similar anger against council members who had to weigh in on a difficult decision. We probably all preferred the scrub pine forest to the proposed high density mixed-use development, but that piece of land was not going to stay wooded.

Now a couple of good folks currently in office are being targeted for their thinking about Aura and other similar developments. That saddens me. Despite the relevant traffic issues, Aura has the potential to be an exemplary project. Twenty years from now, I bet people will be clamoring to live there.

I, too, love the green of our city, but I also love that we don’t sprawl out into the countryside. That is because we have an unusual rural buffer and because our elected officials have embraced the principal of density and mixed-use rather than McMansions. Both Southern Village and Meadowmont are now thriving mixed-use communities with lots of trees, parks and trails. People love living in both of these once contentious developments.

Our rental and housing prices are already beyond the reach of many of the people who work here. I think we should be most concerned about making sure our housing developments serve everyone, not just the out-of-town investors who are building them.

You can find out more about each of the candidates on their websites, in this Voter Guide and in recordings of recent candidate forums sponsored by the Chapel Hill/Carrboro NAACP. You can also view interviews the Chapel Hill Alliance for a Livable Town conducted with each candidate here.

Election day is Nov. 2. You can check to make sure you are registered to vote at your current address and find your precinct’s polling place and sample ballots here.

Early voting begins Thursday, Oct. 14 until Oct. 30. If you are already registered to vote or need to register, you can vote before Election Day at Chapel of the Cross, Seymour Senior Center, Carrboro Town Hall, or at Orange Works in Hillsborough. You can find the complete early voting schedule here.

Please learn about the citizens running for office, people who give generously of their time and intellect to keep our city a delightful place to live. Please vote. Your vote can make the difference in the kind of community we have in the future.

Seven Gardens You Can See Soon

Be the first to comment on "Déjà Vu All Over Again"