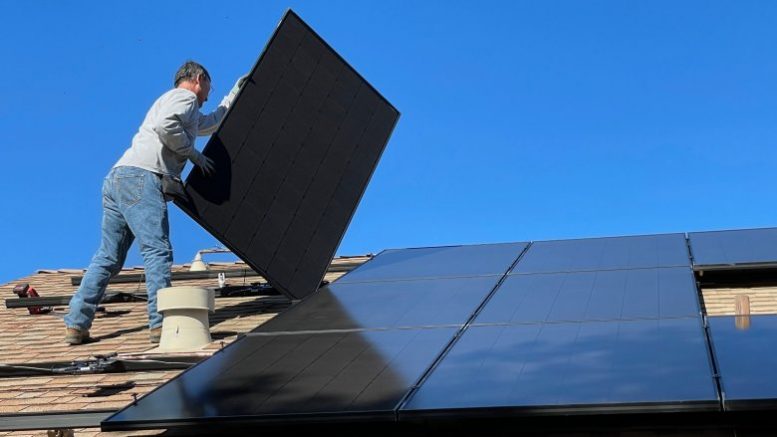 Photo by Bill Mead via Unsplash.com.

“Do your research.” How often have I written that? Research the plants you want to buy, research your site, research your soil. All of this is good advice that I just failed to follow. You see, since my Tesla purchase, I have been hit hard by thoughts of going green.

My attention turned to the matter of solar panels. I have a friend in Rhode Island who proudly posts on Facebook the monthly check that she receives from her local power company. I have a conservative son who has expressed interest in acquiring solar panels. And, yet, in my travels around Chapel Hill I see a dearth of these energy wonders.

Now, my house faces due south, an advantage when it comes to solar panels. I have no trees shielding the roof from the sun—another distinct advantage. And, my 50-year roof that won’t last 50 years is only four years old. All this led me to a deep meditation on solar panels.

But where to find a name of a reputable company? My knitting group (yes, I have been an avid knitter for 45 years) threw out a name, one that I quickly grabbed onto. Mind you, no one in this group had had any experience with installing solar panels.

Of course, having been bitten by the great urge to have solar panels, I called the company and made an appointment to talk by phone with a specialist. Considering he had never laid eyes on my house, he knew an awful lot about it. No, I couldn’t put them on the roof of my carport as it was partially in the shade, so they would have to go on the south side of the roof.

Why was I doing this? Being “of a certain age,” I probably couldn’t break even—this was politely indicated—so was I doing this to save the world? I indicated that this was truly my heroic act for 2023.

The next interview was a Zoom session with Thomas #1. Thomas #1 was very knowledgeable but, more importantly, his was not a hard sell—in fact, it was barely a sell at all. Again, no one had seen the actual house, but he had it configured, showing me what it would look like with a roof covered with solar panels. For a person who proudly wanted to go green, it was, I thought, a rather decent appearance. Solar panels atop a house that is not the author’s home. Photo courtesy of Vivint Solar via Unsplash.com.

Of course, I signed a contract. The price was improved upon in that the Federal Government will give me a substantial tax rebate. Now, I happen to like Federal tax rebates. I did have enough sense to check with my accountant to see if this were true.

And then I learned that the installation date would be in April.

April! I exclaimed that being of a certain age, time was not on my side. Thomas #1 looked a bit startled but stated that he would see what he could do. Further communication with the office always included my rejoinder that time simply wasn’t on my side. Surely this was a more effective argument than admitting that I was into instant gratification, wanting the panels as of yesterday. Everyone was pleasant, saying that they would see what they could do.

With the contract signed, that night potential tragedy almost struck. While watching the local news on WRAL, the station reported they had the lowdown on shoddy companies installing solar panels. My heart went thud.

The design “team” now appeared, consisting of Thomas #2 who checked out my electrical connections and then flew his drones that did whatever drones do when they’re not involved in bombing Ukraine.  I pulled my “time is not on my side” routine; he nodded sympathetically, and explained the following schedule.

My system is small since I’m not getting the batteries (Thomas #2 said that he felt it was totally unnecessary as I had a generator), so it’s a one-day job. Then Chapel Hill, notoriously slow in this area, will inspect the installation (will they fly drones or climb ladders?), and then Duke Energy will magically appear to pair up my system with theirs.

Now, I was lucky. I bought on impulse without doing my research first. I could easily have ended up with the company profiled on WRAL. I—who constantly harangue my readers to research the plants, insecticides and fertilizers they buy—clearly did not follow my own counsel.

Hence, this is the reason for the title of this article: Do as I say, not as I do.

A Loss in the Garden