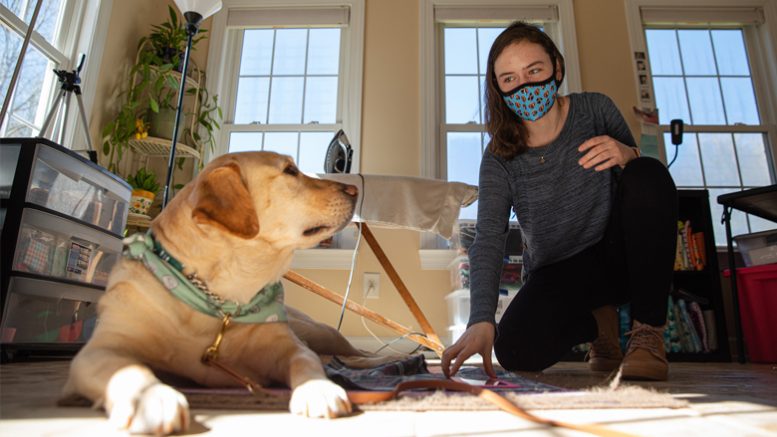 Kate Franklin sat in an examination chair at the Duke Eye Center in Durham, as she had dozens of times before.

With her eyes dilated, Kate couldn’t see much of the room around her. But the 18-year-old’s vision had been blurry—blurrier than normal—for months. Her contacts were no longer correcting her vision. She was running into things and couldn’t read regular-print books. She struggled to identify the faces of those around her.

As she sat in the dimly lit exam room with her parents, waiting for the doctor to return with the test results, she was filled with a cautious sense of hope that she’d get answers.

But the doctor didn’t have answers.

As she sat in the exam chair, she thought: Why me? Why now? Why during my last few months of high school?

Kate gave herself the rest of the day to feel frustrated and upset. Then, she reverted to the mindset that had defined her life.

She was going to prove everyone wrong.

As a newborn, her eyes wandered constantly, rarely focusing on anything or anyone.

As first-time parents, Monica and Jeff Franklin didn’t know that wasn’t normal—but the family’s pediatrician did. A round of visual testing using Teller cards confirmed the diagnosis: optic nerve hypoplasia, or ONH, a congenital condition that caused the nerves in her eyes to be underdeveloped. Her constant searching was caused by a combination of nystagmus, a condition that causes repetitive, uncontrollable eye movements, and strabismus, more commonly known as “lazy eye.”

She had no peripheral vision or depth perception, and everything was blurry. Kate was legally blind.

Her parents were devastated. They didn’t know what to expect for Kate’s quality of life, and they feared the worst.

But Kate was one to defy expectations.

At 13 months, Kate had surgery to correct her strabismus—the only way to ensure she didn’t go fully blind in one eye. Her vision was still 20/1,000 without correction, but it improved to 20/400 with glasses and contacts, allowing her to live a comfortingly normal childhood.

Jeff Franklin coached her recreational soccer teams when she was in elementary school. Kate was scrappy on the field, playing by the rules and making sure the referees knew which players on the opposing team weren’t.

By middle school, she had picked up swimming, biking and running, and later competed in two triathlons.

Sometimes her eye conditions caused her to trip while running, or run into her competitors — but Kate got up, dusted herself off and got back in the race.

Kate also had a strong creative side.

In 2016, she channeled her artistic energy into opening WagALot Pet Shop, an online store for handmade dog accessories. Since then, she’s made more than 3,000 sales and still dedicates at least 10 hours a week to crafting the custom bandanas and collars.

Through much of high school, some of Kate’s classmates didn’t even know she was blind. Her vision was good enough to read regular-print books and see what her teachers wrote on the board in her honors and Advanced Placement courses. She rarely used the accommodations the state provided to her, such as monoculars and magnifiers.

But when her vision worsened during her senior year, resulting in that appointment at the Duke Eye Center, those learning accommodations became a crucial part of Kate’s schoolwork. Assignments that other students completed in 15 minutes took Kate an hour or longer. She struggled to complete science experiments because of the precision they required.

Now, two years later, she’s a sophomore at UNC-Charlotte and is majoring in pre-kinesiology, studying the mechanics and movements of the human body. She communicates regularly with her professors and classroom aides to make sure she has the right accommodations — something that’s more difficult now with classes online.

Taking a quiz for her anatomy lab at home in Hillsborough, Kate emails her instructor about the diagrams they’ve provided. Her vision isn’t good enough to see the fine details.

“Can you tell me what this measurement is?” she emails.

She gets a reply and is ready to finish the quiz.

Sometimes Jeff sees her working at the kitchen table as he’s headed to bed late at night.

“Give yourself credit, you’re doing unbelievable,” he says often. “You’ve worked as hard as you can work, and whatever it turns out to be is fine.”

But “fine” isn’t enough for Kate.

One more email to her professor.

Kate has spent the past 20 years adapting to a largely sighted world.

She uses “bump dots,” raised adhesive stickers in different colors, to give herself a tactile way to maneuver common surfaces and buttons, like on the microwave. She knows that the washing machine dings three times when her clothes finish their cycle. She relies on patterns and organization to put the dishes away.

She documents her life with ONH and “a couple other little conditions” that she’s developed over the past year or so, including dysautonomia, gastroparesis and neuropathy, on Instagram, where she has a combined 27,000 followers over three accounts.

“People think blindness looks a certain way, but it’s different on the individual,” Kate said. “It’s just so important to me that people are aware and know that just because somebody is blind, doesn’t mean their life sucks.”

Kate’s traveled and seen the world, like when she went to Paris and London on a school trip in 2018, and then to Space Camp for Interested Visually Impaired Students in Huntsville, Alabama, a few months later.

Even after her vision worsened, she beat her personal running record at an evening cross-country meet, where the lack of natural light made it almost impossible for Kate to see where she was running.

Kate prefers to do it all on her own, rarely asking for help. But sometimes, she can’t.

Kate hated the white cane. She hated the stares that her peers gave her in the hallways of Orange High School. She hated the hushed whispers she could hear from people on the back row of the classroom. She hated the time she fell down the stairs, or when another student tripped her and she blacked out.

Bernard, a yellow lab from Guiding Eyes for the Blind in New York, replaced Kate’s cane the summer before she moved to Charlotte for college. The pair are a perfect match. Their personalities are nearly identical: gentle and reserved, yet goofy and outgoing. Always up for fun, but ultra-focused and determined when it’s time to work.

Last March, Bernard guided Kate around Washington, D.C., taking her to see the sights with Monica, Jeff and her best friend, Zoe, for spring break.

As the group stopped on the sidewalk of a one-way street, Kate listened for the cars to pass her, waiting until the sound faded to know it was safe to cross — just like her orientation and mobility instructor taught her when her vision worsened.

Bernard inched forward, then stopped suddenly. Another car sped past her.

Her cane wouldn’t have saved her life that day, but Bernard did. Her independent mindset washed away, if only for an instant.

Kate clung to her friend’s arm as they strolled the sandy shores of Emerald Isle after sunset.

Almost a year had passed since Kate’s vision worsened—enough time to accept the change, but not enough that she didn’t question it often. Her 20/1,000 vision allowed her to see the general shapes and colors of people and objects around her, but no fine details.

“I wish I could see the stars,” she told her friend, Faith Moormeier.

Faith let go of Kate’s arm and stepped in front of her.

She moved her arms methodically to mimic the constellations above them, narrating her motions with clear directions of the stars.

“Picture an abnormal rectangle,” Faith said. “With a point far to the left, and another above it.”

Kate closed her eyes and listened to Faith’s descriptions.

Slowly, the stars began to glisten and light up the night sky in Kate’s mind. The constellations formed, illuminating a world she had never seen.

If only for a second, the unanswered questions about her vision loss didn’t matter.

If only for a second, the constant pressure to defy expectations slipped away.

If only for a second, she felt normal.

Peace rushed over her like the sound of the waves crashing on the shore in the distance.

Be the first to comment on "Doing It On Her Own: Kate Franklin’s Blindness Won’t Stop Her"