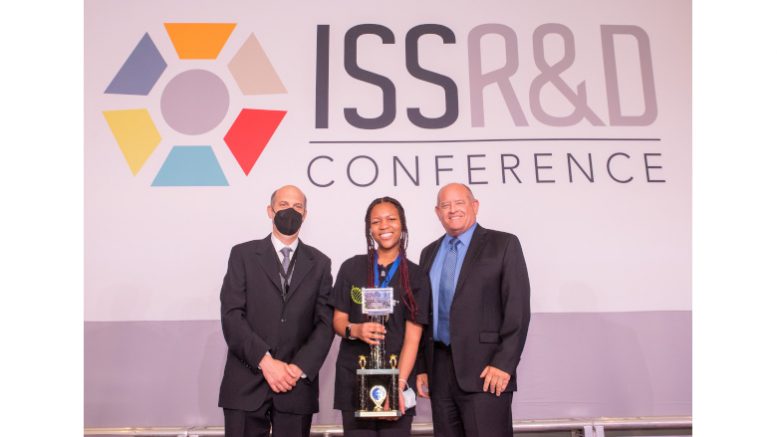 East Chapel Hill High School rising-senior Pristine Onuoha has won the eighth national Genes in Space STEM competition. Her experiment seeks to understand the mechanism behind telomere lengthening, a chromosomal change that has been observed in space travelers. It will be performed by astronauts aboard the International Space Station (ISS) next year

Telomeres are structures that protect DNA from damage. They usually get shorter with age and wear. Surprisingly, telomere lengthening has been observed in space travelers, notably Astronaut Scott Kelly, the subject of NASA’s Twin Study. Onuoha’s experiment will explore the possibility that telomere lengthening is caused by a space-induced proliferation of stem cells—undifferentiated cells from which specialized body components arise and which typically have long telomeres.

Onuoha developed her proposal with guidance from her teacher, Kimberly Manning, and her mentor, Harvard University scientist Ana Karla Cepeda Diaz. In their company, Onuoha will travel to NASA’s Kennedy Space Center to watch her experiment be launched.

Onuoha’s proposal was selected from a competitive field of 602 submissions from 1,175 students across the U.S. Authors of the top five proposals were invited to present their ideas to a panel of scientists, educators, and technologists at the ISS Research & Development Conference in Washington, D.C.

The Genes in Space competition was founded by aerospace giant Boeing and miniPCR bio, a biotech company. Students in grades 7 through 12 design biology experiments that address real-world challenges in space exploration. The competition receives additional sponsorship from the ISS National Laboratory and New England Biolabs. One eye on the microscope, one eye on the stars: East Chapel Hill H.S. junior Pristine Onuoha is a winner in a national competition to conduct genetic experiments aboard the International Space Station.

“Telomeres are the structures at the end of our chromosomes,” Onuoha told TLR. “Longer ones indicate youth and health. Shorter ones indicate aging, and [in some cases] cancer. It was found that the telomeres of astronauts lengthened in space, which was very surprising because space travel is a highly stressful environment. It was also surprising that the lengthening only took place in space. Once astronauts returned to earth, their telomeres got shorter again. My experiment is designed to help us understand what this means.”

Specifically, Onuoha’s experiment will measure the growth rates of stem cells that become white blood cells. As precursor cells, stem cells have longer telomeres. “The finding that telomeres get longer in space really got me interested,” said Onuoha. “I was also surprised that there had been no further research on that topic.”

Onuoha’s family came to the U.S. from Nigeria when she was a young child. They first lived in Lauringburg, NC, southwest of Fayetteville near the state line, and moved to Chapel Hill when Pristine was six years old.

“I’ve always loved science, and been fascinated especially by biology,” said Onuoha. “For as much as we know, we still don’t know a lot. There is so much more research to be done. I’m excited that this experiment could be part of that.”

Onuoha is in a women in science, technology, engineering, and math (STEM) club, and has played the violin since she was in sixth grade. “I am super interested in medicine,” she said. “I would like to be a medical doctor conducting scientific research. I’m very much aware of the scientists of color who have become role models, and I am also excited about the idea of being something of a role model myself.”