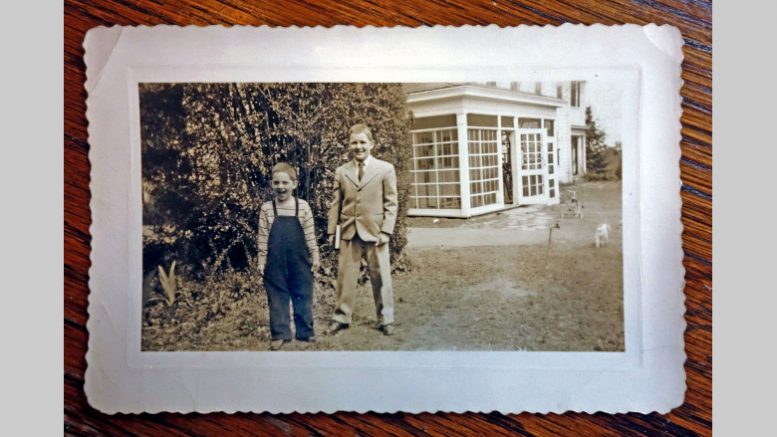 Editor’s Note: the following is excerpted from my work-in-progress book manuscript honoring my late brother, “KEEPER: A Brother’s Restoration.”

All dressed up for Easter Sunday church and holding a Bible, Nick Lauterer, posing heroically in a hand-me-down suit, grins at the camera with confidence and happiness. That’s me, his little brother, dressed in navy blue corduroy overalls, laughing at the moment. In the background is my tricycle and the grandparents’ cocker spaniel, Cotton.

Who is the photographer here? If it is our mother, Myra Lauterer; that is significant. Because if that’s the case, she would be using crutches, with her left leg still in a solid cast, hip to ankle. Picture her taking this photograph: She has both hands on the camera and her weight supported mostly by the crutches jabbing into her armpits. She was, in the parlance of the day, one tough cookie. Similarly, Nick, appears totally recovered from his death-defying scrape.

This appears to be the first photograph taken after the accident, which comes back to me in disjointed images:

Click: After a night game in old Woollen Gym, we are walking back to our parked car near the intersection of South Road and Country Club Road — at that time an unmarked dark intersection on the edge of town with no traffic signals. (The present-day interchange nearest to the School of Government and the Old Chapel Hill Cemetery.)

Click: As we begin crossing the street, all appears safe and calm: Mom is holding my hand, while Nick walks several paces ahead.

Click: Suddenly and without warning, bright lights. A speeding car races up the hill from our right. Screeching brakes. Being violently pushed, thrown, shoved away and down, back to the curbside. Through my tears I’m thinking, “Why would my mother do this to me?”

Click: More flashing lights. This time red. And wailing siren sounds. Garish white lights and the antiseptic smell of the inside the ambulance racing us to distant Watts Hospital in Durham since Chapel Hill had no hospital of its own yet.

Slideshow memory flashes of that awful night when Mom thrust me out of harm’s way and then absorbed the full impact of the speeding car, which shredded her left leg, breaking it in a dozen places.

Meanwhile, Nick, out of her reach, was on his own. Fending for himself. Again. He emerged from that accident with a broken leg; I was completely unscathed.

“Hard-headed German,” Nick proudly described himself after any accident, fall or scrape. Impervious. Indestructible. The impact with the car knocked him 100 feet from the point of contact. Hard-headed German indeed.

That dark awful night’s events have always dogged me; why did Mom save me, not Nick, and then take the hit?

Myra’s impossible choice: sacrifice the elder son and save the youngest? Maybe. But, more likely, her actions were the result of proximity, practicality and timing. I was close at hand; Nick was not. Having no time to save us both, she did what she could in that split second, surely calling out to him in warning, “Nick! Watch out!”

According to the press report, there were many witnesses among the throng of basketball fans heading back to their cars. And a nearby police officer was first on the scene to render aid and call for the ambulance.

According to the Chapel Hill Weekly, “Nick was picked up 100 feet from where he was struck having been carried that distance on the bumper and radiator of the car. Police Officer Blake, who came upon the scene immediately from his nearby post, found no skid marks to indicate the brakes had been applied promptly. Close by eye-witnesses estimated the car going at 40 miles an hour. The driver, who, according to police reports, had not been drinking, was arrested for reckless driving, speeding and injury to person and released under a bond of $1,000.”

The press report concludes with, “Jock was saved from serious injury by the quickness of his mother in pushing him aside so that he got only a glancing blow.”

There are so many questions surrounding this snapshot. Who took the picture? If not Mom, then maybe the grandmother. But by the looks on our faces, I bet it was Myra, the stout-hearted, die-hard amateur photographer, out to show her boys that she could manage the task.

And I do know the scene pictured here: the grandparents’ beloved house at 330 Tenney Circle, (home these days to UNC head football coach Mack Brown and family). It featured a big screened-in back porch, which, to us, was the front of the house, since that’s the way friends and family entered, and it led directly to the spacious, homey kitchen, the heart of that and any home.

Who took care of us while my mother was in rehabilitation? With her leg broken in a dozen places and requiring multiple operations, hers was a long and painful recovery. Blessedly, we lived for at least three months that winter of ’50 in that big house, where Charles and Lionne Rush, both 65, served as cooks, nurses, parents, taxi drivers and lifesavers. But the burden of the caretaking tasks fell mainly on grandmother Rush, while grandfather Rush served as the head librarian at UNC’s Wilson Library.

Of the boys’ status here, Nick is a third grader, because his classmates Ann Proctor Sanders and Cecilia Husbands Menard told me at a recent CHHS ’57 class reunion that they remember bringing Nick his homework from school for the two months while he was in recovery. Once Nick was fit again, it’s easy biking distance for him to the elementary school up on West Franklin Street. But I’m just a 4-year-old, so Grandmother Rush must drive me daily to preschool at University Presbyterian Church.

As to the missing pieces of this story puzzle, recently I stumbled on an envelope full of Mom’s notes about the incident, in which she writes about the kindness of “Officer Blake,” a large man of impressive girth, who would later become “Chief Blake,” and who would deal with Nick’s criminal behavior when he evolved into a troubled teen, barely avoiding arrest, detention, “reform school” or worse.

The revelation that Chief William Blake knew Nick before he broke bad explains why Blake could be so effective with his “come to Jesus” meeting when the juvenile delinquent was caught in the act.

Nick needed that stern but compassionate tongue-lashing from a male role model he never had. And that face-to-face confrontation coming from a big man, and someone other than his autocratic mother, would also figure into the gravitas of the event. And it would further point to why Nick would try to straighten up and fly right. At least for a while.

One thing I do know: Following Mom and Nick’s recovery, the unstoppable “Grammy Rush” successfully lobbied the town and state to install a traffic light at that crossroads. Seventy-one years later, every time I drive through that intersection, I think about the night my brother cheated death and my mother saved my life — almost losing hers.