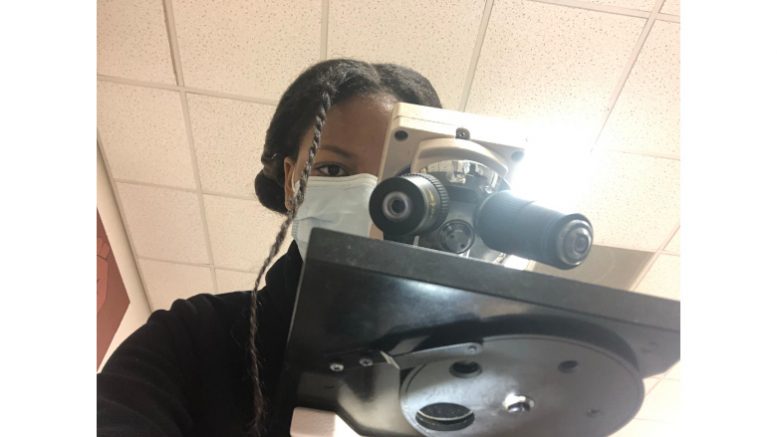 One eye on the microscope, one eye on the stars: East Chapel Hill H.S. junior Pristine Onuoha is a finalist in a national competition to conduct genetic experiments aboard the International Space Station.

A junior at East Chapel Hill High School, Pristine Onuoha, is one of five finalists in a national science competition in which the winner will have their experiment conducted aboard the International Space Station (ISS). That winner of the Genes in Space nationwide competition will be announced at the annual ISS Research and Development Conference, which will be held July 25-28 in Washington, DC.

The Center for the Advancement of Science in Space, which manages the ISS National Laboratory, sponsors the contest annually. The National Aeronautics & Space Administration (NASA) and the American Astronautical Society also serve as co-sponsors of the event.

Onuoha’s experiment proposes to study “the impact of stem cell development on astronaut telomere dynamics.” Students in grades 7 through 12 have proposed a variety of DNA experiments that address a challenge in space exploration. Subjects include the effect of spaceflight on neuronal growth; detecting Alzheimer’s disease risk from long-term space exposure; measuring the phytohormone ethylene in space-grown plants; and plant root health in space.

“Telomeres are the structures at the end of our chromosomes,” Onuoha explained. “Longer ones indicate youth and health. Shorter ones indicate aging, and [in some cases] cancer.

“It was found that the telomeres of astronauts lengthened in space, which was very surprising because space travel is a highly stressful environment,” she continued. “It was also surprising that the lengthening only took place in space. Once astronauts returned to earth, their telomeres got shorter again. My experiment is designed to help us understand what this means.”

“The finding that telomeres get longer in space really got me interested,” said Onuoha. “I was also surprised that there had been no further research on that topic.”

Onuoha’s family came to the U.S. from Nigeria when she was a young child. They first lived in Lauringburg, NC, southwest of Fayetteville near the state line, and moved to Chapel Hill when Pristine was six years old.

“I’ve always loved science, and been fascinated especially by biology,” said Onuoha. “For as much as we know, we still don’t know a lot. There is so much more research to be done. I’m excited that this experiment could be part of that.”

Onuoha is in a women in science, technology, engineering, and math (STEM) club, and has played the violin since she was in sixth grade.

“I am super interested in medicine,” she said. “I would like to be a medical doctor conducting scientific research. I’m very much aware of the scientists of color who have become role models, and I am also excited about the idea of being something of a role model myself.”

One winner each year is selected by a panel of judges, explained Katy Martin who runs the Genes in Space program for miniPCR, the biotech company sponsoring the contest. It makes tools for DNA analysis that are designed to be portable and robust enough for field work.

“They have been taken in to the Amazon basin to study frogs in the river, and also taken into space,” she said. “The tools can also be used in the classroom.”

The contest was started in 2015, with the first experiment sent into space in 2016. Boeing invests in small businesses and technology companies, including miniPCR.

“Biology in space is so new that it is open to students,” Martin said. “There is some study of extraterrestrial biology, but that field is very small. The main ambitions of biology in space are to study living and traveling in space, and its effects on humans and other life forms.”

MiniPCR is based in Cambridge, Massachusetts, also the hometown of Harvard University. The contest is open to any student in grades 7 through 12 in the U.S.

“About 90% of our participants come through teachers who know about the contest,” said Martin. “The other 10% find us on their own. We do all of our reviews blind in conjunction with ISS National Laboratory.”

“Most of the contestants, and even the winners who have their experiments fly, will become scientists, not astronauts,” Martin said. “The finalists spend their whole summer working on their experiments.”

The excitement of the contest fills several roles at different levels. Addressing the serious social, economic, environmental, and political consequences of science illiteracy is not specifically a focal point of the competition, Martin said.

“We’re not able to solve science literacy,” she said. “That is a systemic problem. We hope to foster many young scientists directly, and hope to inform students and everyone about what science is — how it works, who a scientist is.”

“We want to lower the barriers to science, and create accessible science,” she added. “That includes young role models; we hope [it] extends beyond the participants themselves.”