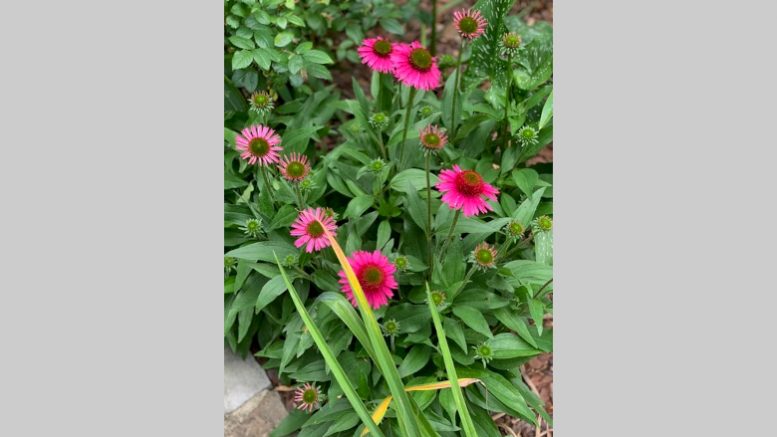 I wish I could grow echinacea as I’m a great admirer of this native prairie plant. It’s a great accent plant in the perennial border, and there’s a spartan quality about it that appeals to me. However, the echinaceas I have planted either died on the vine or flopped unattractively.

Native Americans appreciated this plant, using it to solve numerous physical problems ranging from snakebites to measles. Of the nine echinacea species, the Native Americans were most enamored with E. purpurea, one of the two species we use in our garden – the other being E. tennesseensis.

At one of the local nurseries I frequent, I became famous for my inability to grow this native plant. Fortunately, the Delaware-based Mount Cuba Center has come to my rescue: It has just issued the long-awaited results of its echinacea trial program. The center tested not only those cultivars that are most likely to survive in our gardens, but also those that attracted the most pollinators.

All nine echinacea species are native to the central and southeastern sections of the U.S. Because they are so easy to hybridize, starting in the 1990s, hybridizers began churning out new hybrids, some sporting rather silly pompoms. Rushed too soon to market, many of these hybrids fizzled out, some lasting not even one season in our gardens.

New colors appeared on the market. While E. purpurea produces purple, pink or white blooms, orange and yellow echinaceas emerged, indicating the presence of E. tennesseensis or E. paradoxa in their genetic makeup. The problem was that these two species do not perform well in North Carolina because they need a drier environment with a leaner soil, that is, soil containing less organic material.

Another difficulty the Mount Cuba Center botanists discovered was that many of the hybrids were actually short-lived perennials. The center theorizes that echinacea plants grown from seeds might live longer than those derived from tissue culture. If true, this presents a problem for nurseries as tissue culture gives them more bang for the buck than does laboriously raising plants via seed germination.

Most echinaceas bloom for five weeks in June and July. The flowering season can be extended by deadheading, but doing so can delay an important food source for seed-eating birds, particularly goldfinches.

Seedlings were a problem in the trial because many of the echinaceas were clumped together, whereas we usually spread these plants throughout the garden. Echinacea is not a self-fertilizing plant; it needs a flower from another plant for fertilization. A stand-alone plant will not create any seedlings.

Most echinacea species, with the exception of E. purpurea, grow taproots, making them hard to relocate in the garden. E. purpurea grows fibrous roots, so this is the echinacea to plant if you think you will want to move it in the future.

So, what makes an echinacea a great echinacea? They should be sturdy plants that resist flopping, thus requiring no staking. They should also have a respectable life span in the garden. Their flowers should enhance the garden.

The top-ranking E. purpurea, Pica Bella, that took the honors in the center’s 2009 trial again came out on top, both in the quality of its blooms and in its ability to attract pollinators. The white E. purpurea Fragrant Flowers was a close second in 2009 and again in 2021 in its enticement of pollinators. For the complete recommended list, visit mtcubacenter.org.

Now comes the news that will drive you to distraction: The recommended hybrids can be hard to find. I finally tracked down Fragrant Angel, but Pica Bella still eludes me. It is probably too late to find many of the recommended echinaceas this spring, as many nursery centers have already placed their orders with their growers, who had to determine which hybrids to grow before the report was published.

The report lists numerous hybrids and how each fared in the trials. By all means, check it out before placing your order – it might save you from experiencing a feeling I know all too well: echinacea disappointment.

What Goes Around Comes Around

The Story of a Fence