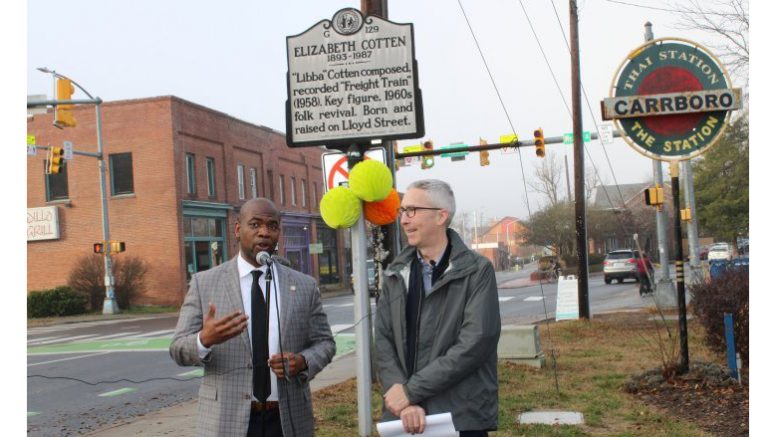 The legacy of Carrboro’s native daughter Elizabeth “Libba” Cotten runs like a freight train through this small North Carolina town, the multifaceted strains of the folk revival, and the big, big sound of rock and roll. On her birthday anniversary, Jan. 5, the legendary musician, singer and songwriter, born in 1893, was celebrated by the Town with a proclamation reading at the N.C. Historical Marker on East Main Street, commemorating her life and musical contributions.

Cotten had already won this nation’s highest award for folk and traditional art in 1984, the National Heritage Fellowship, and a Grammy in 1985 for her album Elizabeth Cotten Live! in the Best Ethnic or Traditional Folk Recording category. However, her posthumous induction into the Rock and Roll Hall of Fame last November as an “Early Influence” almost 40 years after those earlier awards is a testament to the staying power of her creativity.

Pick any fact about Cotten and the reaction has to be, “Phenomenal!”

As the stories are legion on the internet now, Cotten taught herself to play as a child on a right-handed banjo, flipped to accommodate her left-handedness, and then she repeated the process to teach herself the guitar. The inversion of the bass and treble strings led to a captivating style of playing and effect in the sound. Her finger technique became known as “Cotten picking.”

She even began composing songs at a tender age, yielding what became her best-known piece, “Freight Train,” as a teenager, capturing an upbeat melody with lyrical melancholy conjured by the train she could hear near her North Carolina home. This song has been covered by more than a dozen-plus stars in the musical firmament, including Joan Baez, Taj Mahal, Jerry Garcia, Bob Dylan, and Peter, Paul and Mary.

Her name is also connected with famous folk singer, musician and composer Pete Seeger because she was the musical Seeger family’s maid. Cotten’s guitar playing had actually lain dormant for about 40 years in deference to family, work and other responsibilities, so she retrained herself to play at the point a guitar was back in her hands.

It was Pete Seeger’s half-brother, Mike Seeger, who took the family’s delight and amazement for Cotten’s abilities to the recording studio, making her album Folksongs and Instrumentals with Guitar a reality, including “Freight Train.” Dig into that last link to Wikipedia and, yes, you’ll find the connection to the Beatles.

The album was released in 1958, and Cotten not long after began to tour in concerts. In her 60s.

Cotten continued to record albums, including that Grammy Award-winning live album, and to tour, giving her last live performance in the spring of 1987, a few months prior to her death at the age of 94.

Is it any wonder that Cotten is celebrated by her hometown, which decorated the bike path named after her, posted a playlist of her music, and has a music festival starting in May named for her signature song, among other ways to pay her tribute?

“She started working at a very young age and went on to pursue her passion, and that is something that all of us should do. I am inspired by her every day to just keep pressing no matter what is in front of you,” said N.C. Rep. Allen Buansi (Dist. 56, Orange County), who joined the Town of Carrboro in celebrating at the historical marker. Cotten’s legacy includes inspiring new generations of musical artists. Josh Kimbrough, a native of Carrboro, performed at the proclamation ceremony. He is a guitarist and composer inspired by Cotten’s music during college. He performed her song “I’m Going Away.” Josh Kimbrough performs a Cotten song at the celebration of her music and life on Jan. 5. One of many in new generations inspired by her music, he has an LP, Slither, Soar & Disappear, on Tompkins Square Records and performs locally. Photo by Michelle Cassell.

In so many ways, Cotten’s influence extends beyond just the music, as Buansi pointed out. She was one of six women inducted into the Rock and Roll Hall of Fame, and one of two being Black. Cotten composed, played, recorded and toured against all odds—ageism, sexism, racism—both inside and outside of the music industry.

If you haven’t clicked the YouTube clip above, invest the less than three minutes to experience Cotten’s music. Or check out the Spotify list the Town of Carrboro published. And enjoy.

To borrow from the late, great Aretha Franklin: R.E.S.P.E.C.T.

Michelle Cassell contributed to this article.

Michelle Cassell is a seasoned reporter who has covered everything from crime to hurricanes and local politics to human interest over the course of 35 years.

Our Rights, Our Democracy: the Supreme Court

Be the first to comment on "Elizabeth ‘Libba’ Cotten Day: More Than Just a 130th Birthday Anniversary"