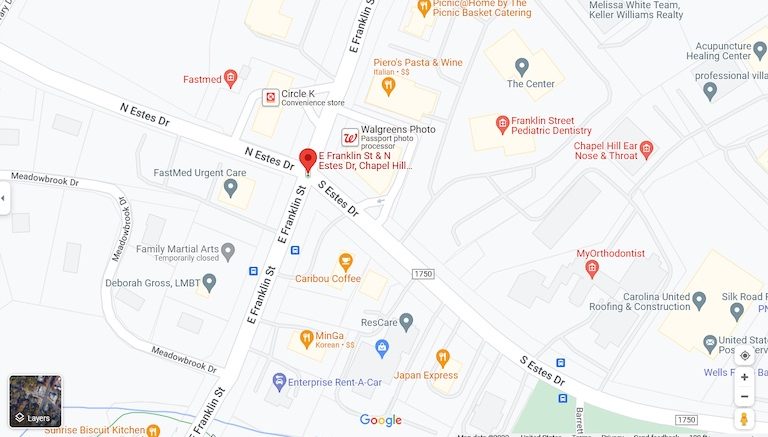 Pedestrian and bicycle safety projects advance on Estes Drive, while congestion persists at its intersection with East Franklin Street. Image via Google Maps.

Long-planned and -studied vehicular traffic, pedestrian, and bicycle improvements to Estes Drive in Chapel Hill are finally within weeks of construction starting. Elsewhere around town other adjustments to traffic control are being made. And south of town other delayed traffic improvements are almost completed at another troubled stretch of road that is under state jurisdiction.

“The Estes Drive bike-ped project has slowed significantly over the past month due to difficulties with utility relocation,” Bergen Watterson, transportation planning manager for the Town of Chapel Hill told The Local Reporter. “There have been a few unforeseen obstacles, literal and figurative, that we are working through and hope to be back on track with grading and actual construction by mid-October to early November.”

Residents along Estes have complained for years about high speeds and heavy traffic volumes. The issue came to a head in January when several pedestrians, including children, were seriously injured when hit by cars. Even when there are no accidents, traffic managers and engineers have to contend with congestion at one intersection that can spread outward to enmesh others. As examples, two intersections along U.S. 15/501 south of Chapel Hill and Carrboro have been notable for their contrast. The intersection of  U.S. 15/501 and Manning Drive is a high-volume crossing for the highway and the major road to the hospitals and south end of the UNC-Chapel Hill campus. Nevertheless, that lane design and light cycle seem to be efficient and effective.

It is not usually a choke point for traffic on U.S. 15/501, and with two dedicated left-turn lanes, the vehicles turning from Manning north onto this major artery can usually clear the intersection in one light cycle.

For those drivers, and ones already headed north on U.S. 15/501, however, the next intersection has been a challenge. The cross street on one side is Carmichael Street, leading to St. Thomas More Roman Catholic School. On the other side is Old Mason Farm Road leading to the North Carolina Botanical Garden.

The light cycle at that intersection often seems out of proportion to the actual traffic flow. As a result, traffic on U.S 15/501 often backs up to the north to jam the major interchange between that corridor and NC Highway 54/Raleigh Road. To the south, the traffic on U.S. 15/501 backs up to clog the intersection with Manning Drive.

As noted, the St. Thomas More school is on Carmichael, and it is possible that the light cycle is intended to allow for arrival and departure of students. That said, there is hardly any traffic out of either Carmichael or Old Mason Farm Road at other times. At rush hour, it is not unusual for the dozens of cars to sit on U.S. 15/501 and watch a handful of vehicles come out from those cross streets.

“This area is closely monitored to implement times that are most helpful to keep the traffic flowing,” said Mike Rempson, traffic signal systems analyst for the Town of Chapel Hill. “However, each day is different and light timing is not a perfect solution due to the volume of traffic in the area at peak times. People traveling through the area between 7:45 and 8 a.m. may have to wait several cycles, and longer cycles are implemented to clear traffic when there is space on the road to do so. This is all true when there are no crashes, which obviously make it even more difficult to clear the area.”

Many larger intersections around Chapel Hill feature a dedicated left-turn lane and traffic light. There are also a few designated right-turn lanes, but for many streets the right lane is designated as straight or right. The snag there is one driver going straight can prevent any other cars from turning right on red.

The contrast is stark at the intersection of East Franklin Street and Estes Drive (putting aside the long-term construction on Estes). Northbound on Estes there are three lanes: one right-turn, one straight and one left-turn. All the other three directions also have three lanes, one left, one straight, and one straight or right. Congestion would ease if drivers going straight were to leave the right-turn lane for just that, but hardly any do.

“Creating a right-turn lane would either require a very expensive construction project (including acquiring right-of-way) or a traffic analysis to see how the intersection would function with reassigning the through/right lanes to right-only,” said Watterson.

“In terms of installing signs saying to leave the through/right lane for drivers turning right,” he added, “I don’t believe that’s an approved sign in the Manual for Uniform Traffic Control Devices, which we need to follow for all road signs.” Lystra Road at U.S 15/501 is seeing long-awaited improvements coming to fruition in hopes of preventing accidents. Image via Google Maps.

Other traffic projects date back years. In 2019, several accidents at U.S. 15/501 and Lystra Road, between Chapel Hill and Pittsboro, prompted residents to call for the elimination of a flashing-yellow left-turn arrow in favor of more structured turn options. At that time, North Carolina Department of Transportation’s Safety & Mobility unit conducted an assessment.

“The location had a study conducted in 2019 that called for the expansion of the left-turn lane and a revised traffic signal for improved safety,” said R. Harris Kay, communications officer for NCDOT. “However, this work was not completed until recently, due to funding disruptions caused by the COVID-19 pandemic. The turn signal revision was completed earlier this month. The turn lane expansion should be complete by the end of the month, though I believe that work has already finished.”

Kay added that “there is a variety of ways the department starts its evaluation of an intersection’s safety. Citizen requests are one way, and can be submitted to the department through our website Contact Us portal or by calling a local maintenance office. Towns and cities also can request NCDOT to take a look at an intersection. The department also has internal programs to look at potentially hazardous locations, which are more periodic in nature.”

A typical assessment takes about 6-8 weeks,” Kay explained, “However, there are exceptions. For instance, an assessment request made in summer in an area often frequented by school buses and children might wait until fall to get more accurate and useful data. A similar situation can occur in tourist areas during the off season.”

1 Comment on "Estes Drive Improvements ‘Getting Back on Track’"