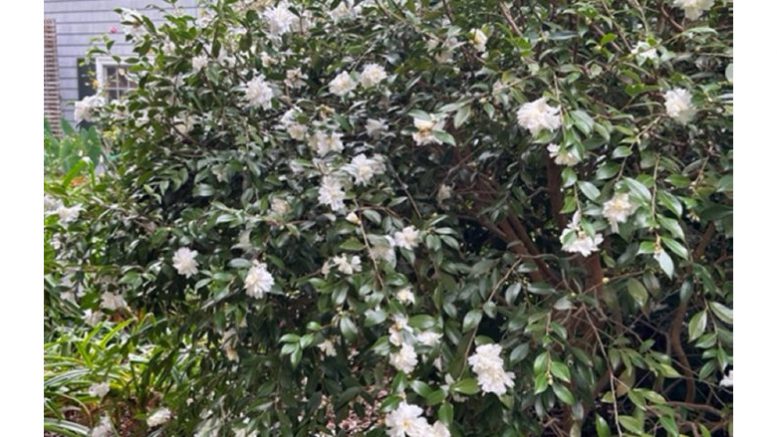 The splendid display of camellias, in this case C. “Snow Flurry,” remains one of the joys of gardening in North Carolina. Photo by Kit Flynn.

Every month I find it’s useful to list my favorite plants of the moment as this has proven to be an invaluable method for refreshing what some of you would consider an aging memory. When I go around the garden with my trusty iPhone, I am always surprised what has drawn my attention.

Polygonatum odoratum turns a lovely orange-yellow in late October, thereby becoming a standout in the perennial border. Without the camera, I’m not sure I would have ever remarked upon this development. Obviously, I am aware when the Japanese maples make their fall statement, but little did I realize that Polygonatum also shines in the fall. My camera picked up the gardenias that are slowly turning into a lovely yellow, something I’d never noticed before.

When I first started planting camellias, I favored the gaudier japonicas over the smaller-leafed sasanquas. However, the sasanquas have won me over as their splendid display reminds me that they remain one of the joys of gardening in North Carolina. C. “Snow Flurry” fills the bill. Interestingly enough, this camellia belongs to neither the japonica nor the sasanqua camp as it is a hybrid of C. oleifera that, in turn, is thought to be a hybrid between C. sasanqua and C. japonica.

If you are shaking your head at that complexity, wondering about the sanity of gardeners, I can only reply that, yes, gardeners do find that of interest.

I have written about that wonderful bulb Amarcrinum before—it bears repeating that it is still a star in the garden. I have these hybrids, a marriage between a crinum and Amaryrillis belladonna, scattered throughout the garden. Some begin to bloom the end of August while others seemingly prefer late September. The other day I noticed two that were happily putting out flowers around Halloween. Plant these bulbs in the spring, forget about them for three years, and then enjoy their long-lasting blooms.

For plant nerds (such as myself): A. belladonna is a true Amaryrillis, native to South Africa, and is only hardy in Zone 9. What we call the Amaryrillis is correctly known as Hippeastrum and originated in the New World.

The dahlias are so happy that they are almost purring. Native to the mountains of Mexico, dahlias love the cool evenings we’ve experienced this September and October. While they have bloomed throughout the summer, their greatest show is around Halloween. Here in Chapel Hill, we haven’t had that first frost that sends them into a tizzy, so they are still happy. The ones I am referring to belong to the Gallery series available at Brent and Becky’s Bulbs. Plant them in early May when the soil has warmed up and enjoy.

The Lavandula “Phenomenal” has lived up to its name. For years I have struggled with lavender as it didn’t enjoy our heat and humidity. While it is considered an English lavender hybrid, there is much discussion whether the other partner was a Portuguese or a French lavender. Unlike English lavenders that languish during our summer temperatures, “Phenomenal” manages to look downright perky. The only treatment I give them is to cut them back in the spring. They quickly fill out, will bloom, while their grayish tinge creates a lovely contrast in the garden. Rather than depending upon it as a focal point, use it as an enhancer for other plants.

The Montauk Daisies, Nipponanthemum nipponicum, on the other hand are rather sparse this year—and it’s my fault. For three consecutive years I have cut them back thinking I was doing them a favor. Instead, I manage to greatly weaken their stems. Upon research, I learned that not only is this a plant that doesn’t appreciate fertilizing, it also insists upon being its own size, rather than the size I want it to be. By letting it do its thing, you’ll have a great bunch of fall daisies.

The last group of plants on my list is the roses, which are relishing the cooler temperatures. Rosa “Faith Whittlesey” has never done a thing for me in the three years she’s been in the ground. Suddenly this October, she has felt like producing—and the blooms are perfect.

Another favorite is the David Austin “Queen of Sweden” that is putting out lovely pink blooms. I have paired her with Clematis “Sapphire Indigo,” the summer lavender blooms of which contrast well with her pink flowers.

“Miracle on the Hudson” is also in full flower. This five-petal shrub rose is a charmer and, to me, holds more appeal than does the Knockout Rose.

Now let me stress that these are my personal favorites in my garden at the end of October. Many of these I would pick up with my own eyes (it’s hard to miss a C. sasanqua in full bloom after all), but several, such as the changing colors of the Solomon’s Seals and Gardenias needed the camera’s eye for me to notice. All in all, I find that this monthly exercise helps me to plan the garden for the next growing season.

A River of Grass

Be the first to comment on "Favorite Plants for Early November"