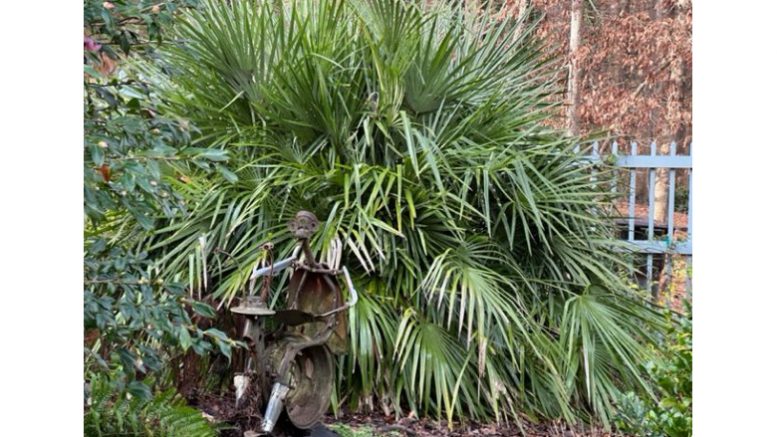 Rapidophyllum hystrix—the needle palm—becomes a star in a Triangle garden this time of year. Photo by Kit Flynn.

Why, I sometimes ask myself, do I garden? The answer is relatively simple: The ultimate aim in my garden is to have something in bloom or of interest 12 months a year. However, ask me in June what my favorite plants are in December, and I draw the dreaded memory blank.

The longer I garden, the more emphasis I put on doing my research before making any decisions concerning plants. Not only do I maintain a prolific photographic record, I also insist on listing my favorite plants on a monthly basis. Why do I persist in this endeavor? I go through this exercise because I need to refresh my aging memory. There is, indeed, a method to my madness.

As I write this, my Japanese maples are winding down. While there are lots of reasons to have these maples, a prime reason is for the glorious colors they provide so late in the fall season. The very last to turn color is Acer palmatum “Mikawa yatsubusa,” a.k.a., my most expensive plant purchase ever. It is now in full glorious color and is incredibly ostentatious. I would have it no other way.

Another plant that grabs my fancy this time of year is Aspidistra elatior “Asahi.” When I was in college, this was the ubiquitous plant many of us had in our college dorm rooms. Known as the “cast iron plant,” it seemed impossible to destroy it, but it usually also held minimal interest as it probably consisted of only three to four leaves.

Put it in the ground and it’s another story. It adds a spikiness to the texture in the garden that captures the eye. Because it also gets fuller every year, it quickly turns into a substantial clump. Best of all, it’s an uncomplaining plant in that it doesn’t droop in the July heat nor does it seem to require fertilizer if it’s planted in decent soil. In the early spring, I merely cut off those leaves damaged during the winter and let it do its own thing. Plant Delights has a wide selection, although it’s imperative to note the zone requirements. A Camellia japonica is bright in early bloom, but take care when choosing camellias for the timing of their blooms since frosts will take their tolls. Photo by Kit Flynn.

It’s an odd month for camellias in that I have it firmly fixed in my mind that sasanquas bloom in the fall whereas japonicas flower in the spring. Have you ever noticed that generalizations are seemingly made to be broken? I have examples of both in flower at the same time. Inevitably, we will get a heavy frost in December and C. japonica “Debutante,” a double-petaled camellia, will freeze in its tracks, thereby ending up with burned buds.

This is an important reminder that when shopping for camellias, please check on their bloom date as those programmed to bloom in late December and January will inevitably end up in disappointment due to deep freezes. My two favorite japonicas, “Jacks” and “Lavender Prince,” bloom in early March when deep frosts have become shorter and rarer, so these two have never disappointed.

This is the time of year when the needle palm, Rapidophyllum hystrix, becomes a star in the garden. The leaves are off the tree, the lingering flowers are minimal, while much of the foliage in the garden has either disappeared or thinned out, leaving this palm to dominate the landscape. Despite its Latin name, this is a very slow growing palm, so it isn’t recommended for instant gratification. Give it sun and watch it thrive as it’s the cold-hardiest palm we have. Be sure to give it the room it will eventually require.

The lavender “Phenomenal” is still holding up beautifully. The longer I have this particular cultivar in the garden, the more I appreciate it. It’s a wonderful highlight plant—with age I have come to the realization that the gaudy stars of the garden depend upon these accents. The soft blue-green of this lavender seems to accentuate those plants placed near it. Fortunately, it’s widely available in the spring. Just cut it back in the spring and watch it bounce back. Enchanting buds on Edgeworthia enjoy being ignored by deer. Photo by Kit Flynn.

Now that the leaves are gone, the small, bell-like buds on Edgeworthia are enchanting. They won’t open until March, but they give us a hint of the promise to come. Plant Edgeworthia with abandon as the deer leave it alone.

Although I admire rosemary for its quirky shape and wonderful smell, I used to appreciate it more than I do now—although I still relish the fact that we can actually grow it here at all. What ruined rosemary for me was visiting my two sons who live outside of San Francisco; there I saw what happy rosemary really looks like, growing with abandon. While I still grow it for culinary purposes, I know I cannot give it the Mediterranean climate it so deserves. Fats japonica will reward you with a lush fullness that looks downright perky. Photo by Kit Flynn.

Fatsia looks downright perky. The longer I have this plant, the more I love it. Put it in a large pot in a spot that gets morning sun and afternoon shade. With a touch of fertilizer beginning the second growing season, this plant will do well in the pot for two years. At that point, place it in the ground, allowing it to reward you. The smaller variegated ones do well in the mixed perennial border, whereas the larger all-green ones will brighten up a sun/shade area.

What I love in my garden—a.k.a., Organized Chaos—is how the different months highlight different plants. By listing my favorite plants each month, this becomes one of the ways that I can easily maintain a record of the garden.

Be the first to comment on "Favorite Plants in December"