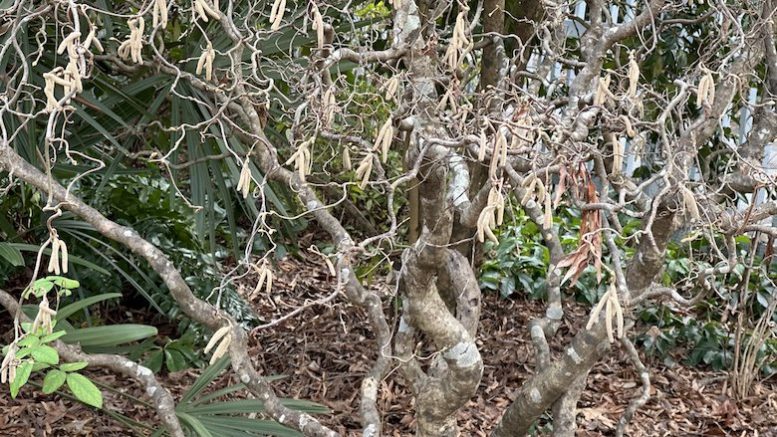 I go through this monthly exercise for several reasons. In the first place, it teaches me to look at the garden differently each month—January’s garden is far different from the one bursting forth in April. Secondly, many of the plants I enjoy in January typically recede into the background during the more ostentatious times in the garden, so I find that my memory periodically benefits from refreshment.

January is a month we typically regard as an unproductive month as blooms are relatively rare. Of course, “unproductive” is a misnomer as many plants are working hard behind the scenes, rather than taking the time off. Here in the Triangle, we are fortunate in that we get a fair number of sunny days with blue skies, thereby providing us with a certain sparkle, albeit one that is rather chilly.

The theme of the January garden is structure. The leaves are off many of the trees and shrubs, leaving bare their branch configuration. It is precisely for this reason that we want Corylus avellana “Contorta,” a.k.a. Harry Lauder’s Walking Stick, in the garden. A sport of C. avellana, the filbert-bearing shrub, “Contorta” has branches that bend in twisted shapes, thereby giving this shrub amazing winter interest.

“Who is Harry Lauder?” you might ask. He was a Scottish entertainer, famed for his twisted cane. Fully leafed out in the summer and fall, this filbert doesn’t hold much interest until it comes into its own in the winter. This is the time of year to admire silhouettes. Japanese maples, divested of their leaves, hold my interest, especially Acer palmatum “Mikawa yatsubusa” (a.k.a., the most expensive plant I have ever bought). While it’s not huge, its bare bone structure dominates that part of the garden.

The white peeling bark of my river birch charms me as it glistens under the January sky. Now, river birches are trees that some sneer at, but I have always found that I enjoy it in winter when the bark is on full display, proving that once again, I am perfectly capable of enjoying a plant held in disdain.

Winter with its chilling months is necessary if many of our delectable spring blooms are going to burst forth. Lilies, hostas and peonies in particular require these necessary “cold” hours in order to flower. This fulfillment of cold hours is the reason we can grow these plants, whereas Floridians cannot. Remember this when you begin to grouse about the chilly temperatures.

Camellia blooms are a bit iffy this month when temperatures can fall into the low 20s. This is the month that we say a final goodbye to the sasanquas and hello to the japonicas, although some early blooming japonicas greet us in December and a few sasanquas linger on. Because the colder temperatures can burn the blooms, I generally recommend planting later-blooming japonicas rather than the early blooming ones.

The camellia “Berenice Boddy” is covered with buds and is gingerly putting forth one or two flowers. This camellia, over ten feet in height, makes her presence known in the winter garden—and she always performs. Appreciate quality in the garden when you have it. What I love about the garden in January is observing the evergreens, of which I have plenty. And, by evergreens, I am not necessarily referring to conifers. Camellias are majestic evergreens, as are my palms.  The charming Fatsias along with the Fatshederas maintain their leaves throughout the winter. The shrub rose—“Spice” hangs on to its leaves—and I happen to find unblemished rose leaves a thing of beauty.

The various clumps of Aspidistras are still looking perky with few damaged leaves. By April, winter’s wear and tear will be obvious; I will cut them back then, but for now, these cheerful clumps add a certain grace to the garden. Come spring when the gaudier plants emerge, I will barely notice them so their time in the spotlight is now.

In January, I’m not looking for flashiness; rather, I relish the small fluctuations. The light is changing as the sun is now moving to what will eventually be its northeastern destination. Days are now a bit longer—and the plants are responding, despite the cold. I see a wayward daylily leaf popping up out of the ground. The crinums, covered with their rather unattractive brown leaves, are yawning in anticipation. Next month I’ll clear the brown leaves but until then they will provide some protection to the roots. A Helleborus foetidus, here about to bloom, provides color contrast in the garden. Photo by Kit Flynn.

I appreciate the chartreuse new growth and buds on Helleborus foetidus. As with H. x hybridus, H. foetidus is seedy, but unlike its cousin, these seedlings pull out easily so I can forgive its need to overpopulate the landscape. Chartreuse is a color I dislike in clothing, but in the garden it’s a color worth seeking out as it casts a great contrast to the various greens of the evergreen plants.

For the past seven or eight months I have kept turning in appreciation to Lavandula “Phenomenal” as this herb, even when it’s not in bloom, offers so much. The grey color again offers contrast, but the real reason to plant this cultivar is that it holds up beautifully in cold winters and hot, humid summers—what more can you ask of a plant?

In January, go out into the garden to notice the subtle changes taking place. Is that daylily leaf foolhardy to appear so early or does it know what it’s doing? How can the Aspidistra look so perky when the mornings are below freezing? Rejoice that the lilies, hostas, and peonies are getting those chilling hours they require while savoring the miracle of the Camellia japonicas beginning to bloom.

We’re turning the corner to begin another year in the garden.

After being an active member of the Durham County Extension Master Gardeners for 13 years, Kit Flynn now holds emeritus status. For five years she was the gardening correspondent for “Senior Correspondent” and shared “The Absentee Gardener” column with fellow Master Gardener Lise Jenkins. She has given numerous presentations on various gardening topics to Triangle organizations and can be reached at howyourgardengrows@icloud.com

How Does Your Garden Grow, Uncategorized

Be Careful What You Read

Be the first to comment on "Favorite Plants In January"