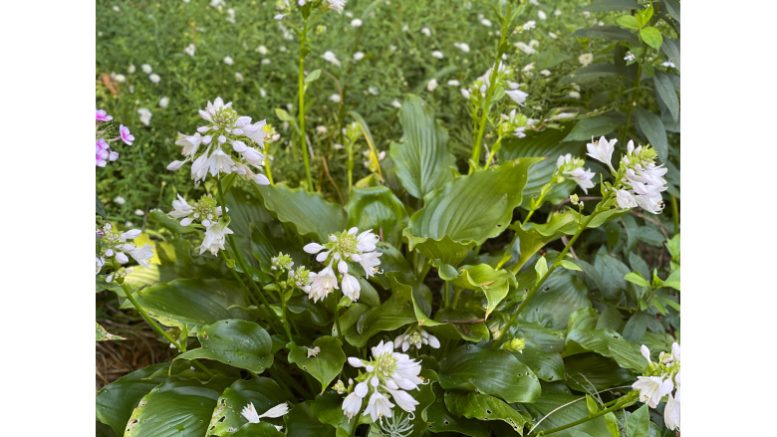 Every month I make a list of the plants I’m enjoying in the garden – not an inventory of all the plants I have but, rather, those I especially savor. Why do I do this? Mine is not an especially retentive memory so, come August, I tend to forget those plants that delighted me in April. What makes these lists doubly interesting is how they have changed over the years.

Ten years ago, I planted five Asiatic lilies at the beginning of one of the perennial borders and thought little about them. Now, Asiatic lilies are not nearly as dramatic as the Orienpet lilies because the former’s blooms are a touch smaller and lack fragrance. And because they also need to be staked, I can unequivocally state they were not my favorite lilies.

My Asiatic lilies – of an unknown variety, alas, as I forgot to mark them – happily naturalized over the intervening years so now the original five have turned into a large clump of forty-five. Knowing they will always require staking, I’ve learned to perform this chore ahead of time to avoid being suddenly faced with lilies bending in two after a rain.

Why are these lilies now on my “favorite plant” list for this past July? The pre-staking has meant that I haven’t had to resurrect them from gross untidiness – and their bloom cycle lasts well over five weeks. Who cannot appreciate such stalwarts of the garden, especially during the hot humid days we have endured?

Some of my favorite plants are inconspicuous. Spigelia captures my heart every spring with its small red blooms topped with a golden star. This year, their third year in my garden, the clumps reappeared twice their size, much to my delight. This is a lovely accent plant, perfect for the perennial border provided you can give it some shade in the afternoon. A bonus is that it puts forth some new flowers come August. I have long extolled the virtues of the crinum ‘Super Ellen’ but every year, with minimal care, she inspires me. There are only two rules to follow when it pertains to crinums: Do not move them and do not cut them back in the fall. ‘Super Ellen’ is the largest of the crinums, has a long bloom time (up to two months), and stands proudly in the garden.

I’m a big fan of hostas but Tony Avent’s introduction, ‘Branching Out’, has me stuttering for appropriate adjectives to describe it. Hosta flowers were never the reason to grow hostas as far as I was concerned until ‘Branching Out’ appeared on the scene. This is a hosta that takes flowering seriously – and it puts out lots of flowers, so many that it leaves me speechless. The leaves are nice but this hosta’s flowers are the reason to put it in the garden.

By August, my garden is looking forward to those cool nights that cannot return soon enough. The plants are tired, the roses are in semi-dormancy, and the garden badly needs refreshing. Then along come the Amarcrinums to cheer me up. Who would think that a marriage between Amaryllis belladonna, a South African native we cannot grow here, and a crinum would successfully bloom in August after a long, hot summer?

And bloom they do. For five weeks I have a succession of Amarcrinums that I treasure. Give them some sun and these bulbs will take off, slowly multiplying. The only hitch is that it usually takes them three years before they deign to throw out a bloom so my advice is to plant them in a sunny locale and forget them – and then be pleasantly surprised.

August brings forth one of my favorite clematises: C. virginiana. Before I knew any better, I lusted after C. ternifolia (also sometimes listed as C. paniculata), aka Sweet Autumn Clematis, before I learned that this is one invasive and seedy clematis. The better alternative is the native species C. virginiana that I grow over a tall Camellia sasanqua, one that is in the midst of its summer slumber. Suddenly for two straight weeks it bursts into full flower. If I didn’t mark this on my list, I would forget about it as it has a short bloom time, remaining fairly inconspicuous. As far as I’m concerned, those two weeks makes this clematis a keeper.

The last plant I’m going to list here is my Lady Banks rose. It only blooms once and not for very long. However, this thornless rose has a lot going for it. When it is in flower, it’s breathtaking. Deer tend to leave it alone and unlike many roses, it’s very attractive even when it’s not in bloom. The late frost nipped the buds this year but, as I tell myself, this is part of gardening and there is always next year.