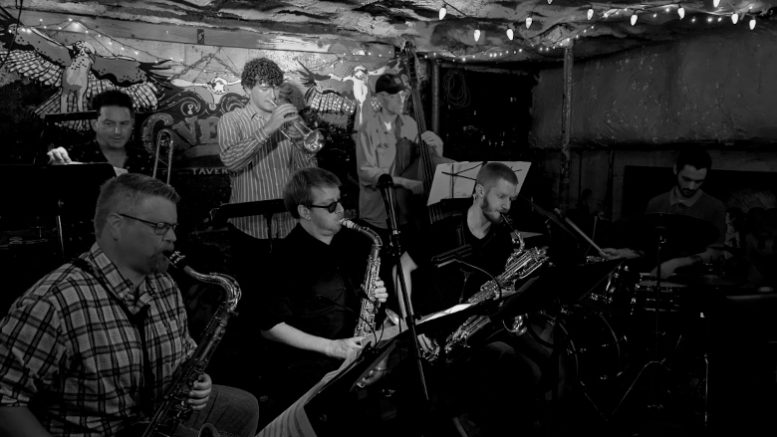 “I believe in revealing the creative process behind the music.”

So said Brad Linde last Thursday night in Chapel Hill as he introduced the final composition of a two-hour jazz set at The Cave.

Indeed, throughout the two hours, Linde audibly gave direction at the beginning of and during every selection, calling out parts and cueing the players. Linde also indicated who would be soloing in a given piece and how the other instruments should provide a sonic background to the solo.

The entire gig was unrehearsed.

One early selection was preceded by an extended discussion among the septet about time signatures.

Jazz, an original American art form, is highly improvisational in nature and performing unrehearsed requires all band members to be good sight-readers, that is, to be able to play music correctly the first time they see the written score.

Together, these elements made for an electric night of live jazz, one in which the music was created, and interpreted live and raw right in the moment.

The Cave, a venerable local performance venue and Chapel Hill’s oldest bar, lends itself to a steamy summer night of music. It sits below street level and is designed to look like a cavern. The rectangular room’s long, narrow dimensions and low ceiling provide such good acoustics that Linde and his cohorts were able to perform without either microphones or amplifiers.

Even the wooden seatbacks vibrated.

Linde grew up in Elon, NC and attended UNC-CH. “I have a love affair with Chapel Hill that goes back to 1995,” he said. “I lived in Chapel Hill before moving to DC and although it’s been 17 years, it still feels like home.”

He finds this area of North Carolina has a strong and steady music scene. There are music educators and venues that foster a knowledgeable and appreciative audience. “A lot of the musicians I work with are old friends and mentors and I make the time to play with them,” Linde said.

Linde seeks to build community by bringing unique experiences to audiences and fellow musicians. “I just have a lot of ideas and repertoires I want to explore,” he said.

“I love the sound of a chamber ensemble and it gets more people involved. Again, it’s my interest in community that drives my ‘the-more-the-merrier’ approach.”

For example, Linde was at The Cave April 22 to commemorate jazz great Charles Mingus’ centennial, with a quintet to play some of Mingus’ rarely heard compositions. A few weeks later, he was at Sharp Nine Gallery in Durham with an 11-piece band to present Mingus’ chamber ensemble music.

“Mingus played with a romanticism and wit across early jazz, big band, bebop, cool, third-stream, avant-garde, the blues,” Linde said. “It was sincere, dramatic, and swinging music — so many layers to it and brilliantly structured melodically, rhythmically, and harmonically.”

“Mark sent me his Grachan arrangements for our initial performance in 2011 and I really hate to just put things away and never play them again,” Linde said.

They were supposed to work together again but, alas, could not.

“I wanted to honor his legacy and perform the music again with Danny Grewen as the featured trombone. Danny is one of the best trombone players and people anywhere.” Clockwise from top left: Entrance of The Cave. All others, Brad Linde Ensemble. Photos and collage by Pamir Kiciman.

Moncur, though not well known among the general public, made music — often his own music — with jazz luminaries of the 1960s who had bigger audiences, such as Jackie McLean, Wayne Shorter, and Archie Shepp.

Moncur was also a serious composer. His insistence on receiving royalties as a composer, not only as a performer, caused friction with Blue Note, the dominant jazz record label of the time.

“Moncur’s compositions are deep,” Linde said, “There’s a message and mood to each one and he’s really telling a story. His compositions have a dramatic or cinematic quality. We use the term avant-garde to describe his music, but it’s very structured and he creates new forms and harmonic progressions to frame his melodies.”

This was evident in the Brad Linde Ensemble’s performance at The Cave. There were moments of frenzied chaos where every instrument seemed to be on a freeform tangent of its own, yet it still made sense and Linde was able to restore musical order with a motion of his hand, returning the piece to its fundamental themes.

During the show, people danced and raucously applauded and cheered, and the entire room was mesmerized by the hypnotic, slow dirge-like ballad Love And Hate.

“[Moncur’s] trombone playing had the same vibe as his writing. Thoughtful, surprising, compelling,” Linde said. “It’s easy to conjure up images or narratives when listening to or playing Moncur’s work.”

Like jazz greats such as Mingus and Moncur, Linde is also a music educator and bandleader.

“I was leading a band in high school — a combo that played stock jazz arrangements. We would go to elementary and middle schools and play for them at lunch,” Linde said.

This was the beginning of professional bandleader projects like his 17-piece big band The Bohemian Caverns Jazz Orchestra, and his current ensembles.

Linde feels fortunate to have had devoted educators and mentors throughout his musical life and career.

He credits Jim Ketch at UNC-CH for teaching him the language of bebop — the genre of jazz Linde prefers to play — together with vibraphonist Jon Metzger at Elon University who revealed to him, “that bebop is the yardstick by which a jazz musician is measured.”

Along the way, Linde has been mentored by the likes of Barry Harris (“He taught me the rules of bebop and love for this music,”) Freddie Redd (“Freddie taught me a lot about patience, space, voice-leading, and the joy of discovery,) and Lee Konitz.

“Lee Konitz is my absolute hero. He gave me permission to improvise, to be myself, and to open my ears to the big picture when playing. His dry wit and dry sound encourage those same proclivities in me, ” Linde said. “No one else has meant so much to me.”

Brad Linde will be back at The Cave September 1 for another musical adventure and his birthday celebration.

Be the first to comment on "Feel the Heat: Brad Linde Ensemble’s Fiery Night of Jazz at The Cave"