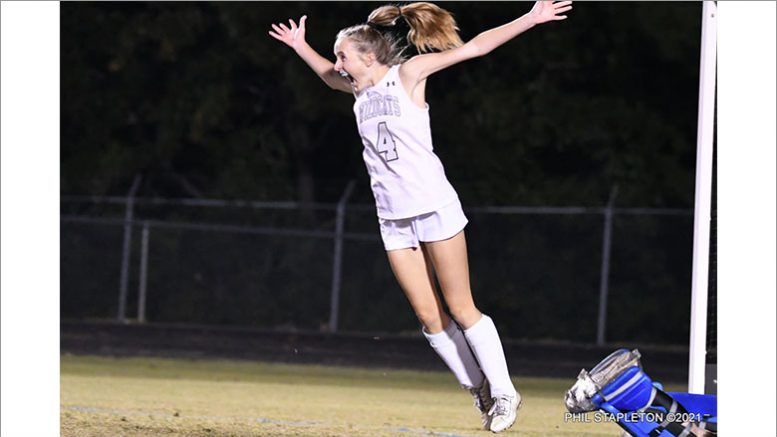 By Atticus Crothers, The ECHO

After a strange 2020 season that was played later than normal (in November and December), with a condensed schedule of games against just three different opponents, as well as mask requirements for players, the East field hockey team was ready to get back to normal this fall.

But first, it needed a coach.

“I remember reaching out to one of my private coaches because they know a lot of coaches around here and I said, like, ‘We need a coach,’” senior midfielder Emma Long said.

Luckily for East, just days after moving to the United States from Argentina, Manuel Garcia Nieto (who was also coaching a local club team) stepped in to lead the Wildcats program.

“Manuel is an awesome coach,” Long said. “It was a big adjustment for everyone, but he was just so passionate about us. Even though he hardly knew us, he had a lot of confidence in us and he really wanted it so much for us and he just was really great at recognizing what we needed to work on.”

That philosophy fueled the Wildcats in an utterly dominant regular season in which East went 14-0, outscoring opponents 89-2 (69-0 in conference play). A 4-0 victory over Carrboro was the closest conference game East played.

“We possessed the ball so much on offense that the other team didn’t even have a chance to really attack us. When they did have those chances, we were just so aggressive and we defended outside of our circle and hardly even gave them the chance to shoot,” Long said. “It was just our mentality. We never settled, like we could have ended games like 2-0 or 4-0, but we kept going to 10 every single time because we were just so hungry and aggressive.”

After finishing off their undefeated regular season, the Wildcats won an exhibition game against Charlotte Catholic by a score of 2-0. They then defeated Carrboro 10-0 in East’s first game of the playoffs to reach the semifinals and a home rematch with Catholic Nov. 4.

A hard-fought four quarters of regulation yielded no goals, sending the game to a seven-on-seven sudden death overtime.

“Overtime suits our team well because it’s all about the breakaway and the space you have because it’s 7v7 and [playing in space] is how we score the majority of our goals,” Long said. “So we just looked at each other and we’re just like, ‘We’ve got this and I was like, ‘Yeah, you’re right.’ And no one was nervous. We were just all confident that we could do it.’”

With about four minutes remaining in the overtime period, Emma Long got possession in the midfield and looked forward, finding her sister Ayden, who connected with Molly Reed, the team’s leading scorer.

“During practice, we practiced breakaways and good passing,” senior forward Ayden Long said. “When Emma passed the ball to me, and I saw Molly, I was like, ‘We’ve practiced this a lot of times, Molly has scored this goal so many times. I just have confidence in her scoring.’ So I was really excited.”

Reed delivered, beating one defender and slotting home a shot to the goalkeeper’s left, kicking off the celebration. The team celebrates its victory over Charlotte Catholic High School in the state semifinal match. Photo by Phil Stapleton.

“I just remember throwing my stick down and then running toward the huddle and then getting stampeded,” senior defender Liza Stanley said.

“We were all in a hug and [senior defender Maya Romeiser] crushed me; I have a huge bruise,” Emma Long said. “It was definitely a relief because that was a pretty emotional game for me.”

After a scoreless first half, the Mustangs broke through in the final two quarters and defeated the Wildcats by a score of 3-0, representing the first goals East had allowed in nearly two months. Despite the loss, East’s seniors remained proud of their team’s effort.

“We kept going,” Emma Long said. “Even though it was 3-0 with a couple minutes left and looking nearly impossible to win, we didn’t give up.”

Long also noticed a change in the team’s mentality from the state championship game three years ago.

“I think the difference was, even though we still lost, no one on the team was nervous at all, like I was not nervous one bit, which is not normal,” she said. “Because I normally am nervous before every game, but I still wasn’t nervous in the state championship. Not because I was cocky, but because I was just so confident in my ability and everyone else’s ability.”

Despite the loss in the state title game, the overtime semifinal win over Charlotte Catholic gave the Wildcats’ seniors their second regional championship and a total record of 61-5.

High Schools Will Have Their Playoffs