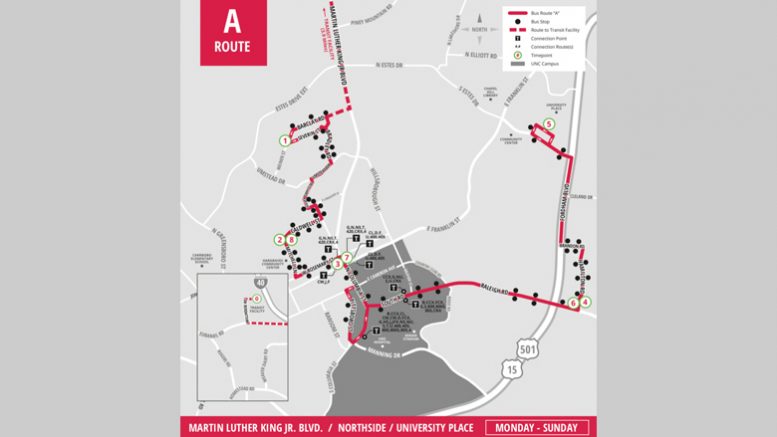 Where do you want to go? When and how often? Has COVID-19 changed any of your transit-riding habits?

That’s the gist of a survey Orange County has posted online to collect information as it updates its transit plan — a plan that won’t have a light-rail component yet also might have fewer dollars.

Orange County’s first transit plan came into being in 2012 as the Durham-Chapel Hill-Carrboro Metropolitan Planning Organization, the Orange County Board of Commissioners and the GoTriangle bus system gathered up all the disparate pieces of public transportation and laid them out to see how they fit together. The plan showed which areas were well-served and where there were gaps, and how best to invest the funds from a half-cent sales tax that voters had recently approved to spend on improving public transportation in the county.

The 2012 plan divided the money between expanding local bus service and funding three capital projects: The Chapel Hill North-South Bus Rapid Transit project, a new Amtrak station in Hillsborough and the Durham-Orange Light Rail commuter train. The plan was updated in 2017 to shift more money toward light rail, but last year, the light rail project was scrapped after a couple of key partners withdrew.

The planners must now decide how to reallocate the funds that had been earmarked for light rail.

To help with the update, the county appointed a committee composed of elected officials from the county and its largest towns and hired a team of local and national consultants from Renaissance Planning, Jarrett Walker & Associates, McClaurin Solutions and Bilingual Communications Inc. The consulting team and county staff invited the public to a three-hour Zoom meeting earlier this month. About 60 people logged in.

The money for public transit comes from state and federal funds, fares and four county revenue streams: the half-cent sales tax, a 5-percent vehicle rental tax, a $7 county vehicle registration fee and a $3 increase to the GoTriangle regional vehicle registration fee. For fiscal year 2020-21, said Travis Myren, the deputy county manager who is overseeing the plan, dedicated transit revenues are budgeted to be about $9.5 million, which accounts for an anticipated decrease in sales tax proceeds due to the pandemic.

“We are monitoring sales tax performance very closely as the fiscal year proceeds,” he wrote in an email.

Shortly after the light rail project ended, the county board of commissioners shifted $8 million to the BRT project, bringing the total allocation from $6.1 million to $14.1 million. BRT is at about the 30-percent completion phase.

Brian Litchfield, CHT executive director, wrote in an email: “The OCTP and the funding it provides is critical to the Chapel Hill Transit budget.”

Chapel Hill has identified an additional $2.8 million in service needs that are not currently funded, as well as more than $5 million in unfunded bus stop, shelter and sidewalk improvements. Looking ahead to when BRT is ready to roll, the town must find about $3.4 million a year to keep it running.

At present, roughly 70 percent of the county transit funds go toward capital projects, mainly for BRT, and the remaining 30 percent toward operating costs. CHT has the highest productivity for the lowest cost per rider, followed by GoTriangle at twice the cost per boarding, and then Orange County Public Transportation at a third to half again as much per passenger.

Resources are limited, and demand is strong. In the Oct. 1 Zoom meeting, the community wrestled with the tradeoff between expanding routes to serve more people, extending routes farther out in the county, or running buses more frequently.

To answer that question, said community participant Fred Lampe [Note: Lampe is a member of Friends of Local Journalism, which publishes The Local Reporter], “You need to know where people need to go. … Coverage should be based on need, not density.”

The transit plan team estimated that about 10,000 people in the county need access to public transportation, but with only two weeks left to go before the survey closed, fewer than 200 people had responded. Typically, information could go home with schoolchildren, but due to the pandemic, students aren’t physically at schools. Consultant Irma McClaurin suggested including a postcard with grocery deliveries about how people could weigh in, and setting up a comment box at grocery stores where people could respond.

The first survey closed Oct. 16. But another is planned for early 2021, as is another transit summit to which the community will be invited. Residents who have questions or comments can submit them at the plan’s website, www.octransit2020.com.

A draft of the updated plan will be posted for public review before it’s presented to the county commissioners, MPO and GoTriangle’s board of trustees.

Mayor’s Tree of the Year Announced