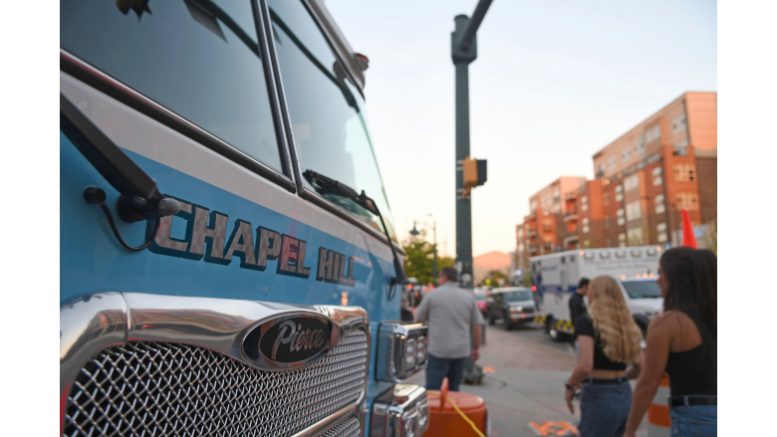 The intersection of Franklin Street and Church Street in Chapel Hill resounded with country music and revelry Friday night, all in the name of a noble cause. People gathered for the second annual Orange County Firefighters and First Responder Bash — a fundraiser to support firefighters suffering from occupation-related cancers.

“The use of cancer-causing chemicals in [construction] materials and buildings has increased,” Blake said. “Certain types of firefighting foam were also found to cause a cancer danger and their use has been discontinued.”

At the event, attendees grabbed pours of beer and wine while The Mason Lovette Band took the stage. Firefighters from across Orange County stood in line to enter a raffle, or gauge the competition in the “best mustache” contest.

White Cross Fire Chief Philip Nasseri, who organized the fundraiser, said that approximately 150 people showed up for the event and about $9,000 was raised for firefighters and their families.

The secondary focus of the Bash was to voice support for North Carolina House Bill 535, which is still in committee hearings. In its current form, the bill reimburses eligible firefighters up to $12,000 for out-of-pocket medical expenses due to a cancer diagnosis, a payable lump sum benefit of $25,000 and a monthly disability benefit.

According to a 2018 report by the National Fire Protection Association, there are roughly 1,115,000 firefighters in the United States, of whom about 67% percent are volunteers.

“Obviously, firefighting is a risky occupation,” Blake said. “When you think about it, firefighting is a combination of physics, chemistry and biology, all the associated risks are possible and elevated because you are trying to gain control over them by putting yourself in the way.”

Blake also added that the Bash would continue even if HB 535 wasn’t making its way through the state legislature.

“One thing you find when you train and face risk with people, you grow close to them. These are friends you make for life. When they are hurting you try to help. Besides, it is a chance to have a bit of fun.” Shirts are laid out for sale at the second annual Orange County Firefighter and First Responder Bash. Proceeds from the fundraiser are given to the families of local firefighters battling cancer. Photo by James Kiefer. An attendee wears a shirt from the fundraiser. Photo by James Kiefer.