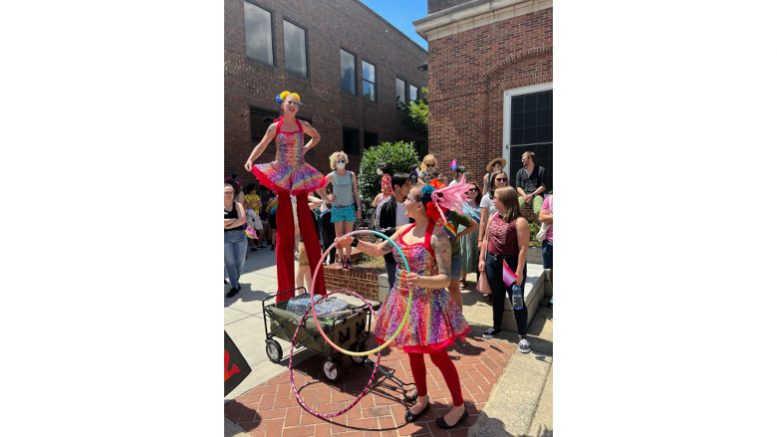 Former Chapel Hill mayor Mark Kleinschmidt kicked off the first annual Pride Promenade last Saturday in downtown Chapel Hill by addressing the more than 350 people in attendance. Kleinschmidt took the opportunity to reflect on the progress of the local LGBTQIA+ community over the past three and half decades.

“I got here some 34 years ago and I was part of some gay groups that would gather and we could never imagine what I am seeing here today,” said Kleinschmidt. “We’d have a rule — no cameras, no press, no real names —this world is a different place. I can’t imagine queer young people on the street celebrating who they are.”

Revelers cheered and danced to the Cupid Shuffle, hula hoopers and acrobats performed and sang songs, dressed in all colors of the rainbow even the canines showed up dyed to match, as the parade began in earnest.

Kleinschmidt, the third openly gay mayor to be elected in North Carolina, described Chapel Hill as “the greatest town in America,” but acknowledged much work needs to be done to fully support the town’s LGBTQIA+ community.

Carrboro Mayor Damon Sells said he was thrilled to be a part of Saturday’s event.

“We are here to celebrate and get to work,” Sells said.

Rowan Merritt, assistant director for Library and Community Arts and Culture for the town of Chapel Hill, also deemed the inaugural event a success.

“It’s especially encouraging at this time when queer rights are so under threat we’re really looking forward to celebrating our identities and our community this year,” said Samantha Slayer, a member of Chapel Hill’s  LGBTQ+ Employee Research Group (ERG).

NC House Bill 755, known as the “Parents’ Bill of Rights,” would ban the teaching LGBTQ issues in the state’s public schools. The bill clearly states, “Instruction on sexual orientation or gender identity shall not be included in the curriculum provided in grades kindergarten through third grade.”

The proposed legislation was addressed by Kleinschmidt and others in attendance at Saturday’s event.

“We are not safe,” Kleinschmidt said. “We have cause to celebrate but we have a lot of work still to do. There are people that are putting the most vulnerable people in our community at harm’s risk.”

The Pride Promenade is all about making a statement that “we aren’t going anywhere,” he added.

As the event progressed, all 350 Pride Promenade marchers proceeded down Franklin St. and stopped in front of 411 West restaurant where they were entertained by DJ Savon, the Triangle Gay Men’s Chorus, and interactive artist Kelly Schrader. The celebration continued throughout the afternoon.

The inaugural event marked the start of a monthlong LGBTQIA+ celebration in Chapel Hill and Carrboro.

Orgullo Latinx Pride, a group of Latinx high school performers from Chatham County, will perform at the Carrboro Town Commons on Saturday, June 11 from 5 p.m. to 9 p.m. “Drag Story Time: Spray J” will be held at the Carrboro Century Center on Saturday, June 11 from 3 p.m. to 4 p.m.  Two other Triangle Drag royalty performers will offer story hours on June 18 and 25 at the Chapel Hill Public Library from 3 p.m. to 4 p.m.

Pride Piper walk will begin at the Carrboro Century Center on Friday, June 24 beginning at 4:30 pm. Local officials will join the Bulltown Strutters, a New Orleans-style parade and stage band to march down Weaver Street from the Century Center to the Town Commons for the Pride Food Truck Rodeo and Dance Party.

For a complete schedule of events visit chapelhillarts.org/smalltownpride and www.carrboronc.gov/pride.