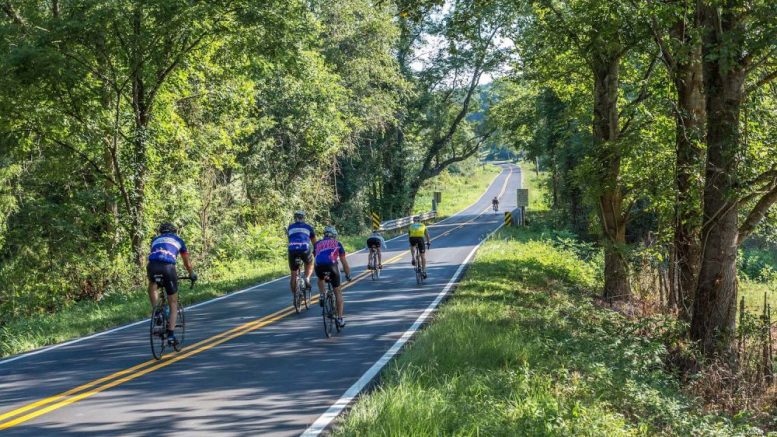 Funny things can happen when you ride a bike in North Carolina. Like the time I was almost hit by a flying squirrel. Right here in Orange County.

I was riding on Kimbro Road, under a clear blue sky, when a squirrel landed on the pavement a few feet ahead of me. I overshot it, then turned back to take a closer look. It was a squirrel all right or the remains of one. My guess is that the squirrel took flight in the talons of a hawk that either disliked cyclists or had a sense of humor. The lesson was clear: always wear a helmet.

On another ride, years ago in another county, I found backhoes, bulldozers, and men in hardhats where I expected to find a bridge. I rode right up to the point where the road turned to air. It seemed hopeless. I looked upstream and down, imagining that I might be able to carry my bike and bushwhack it to the other side. Just then a young man in muddy boots and coveralls came up to me and said, “Wanna cross?”

I was starting to explain that I had no alternate route when he picked up my bike, spun around, and began to cross the twenty-foot gap on a narrow aluminum plank I hadn’t even seen. He tipped his head to indicate that I should follow.

I’d gone only a few feet, shuffling in my cleats like a terrified penguin, when I looked up and saw the workers on the far side of the creek staring at me. I froze and considered turning back. So what if I had to ride an extra 10 miles to get home? Wasn’t that the point, to be out on my bike? I was too scared to try to turn around, so I shuffled on, the plank flexing beneath me.

On the other side, the young man handed me my bike. I thanked him for his help as I remounted. “Have a good ride,” he said, turning back to his work before I could say another word. I rode away confident that I’d left it up to the next cyclist to make a better impression.

Then there was the time I rode into a James Dickey novel. It was the summer of 1988, and I was still living in Raleigh. I was an ultramarathon racer back then, so I racked up a lot of miles. One day I was in Johnston County somewhere west of Smithfield when I needed to refill my water bottles.

I came to a small gas station and country store. It was two pumps and a shack in need of fresh paint. There was no pavement, just gravel. The station, such as it was, seemed to belong to the old farmhouse that sat about 50 feet away. I parked my bike, grabbed my bottles and went inside.

Two weather-beaten white men with short-cropped hair leaned back in chairs. A third man, looking much the same, leaned forward on the counter next to the cash register. I surmised from their expressions that cyclists in skintight spandex didn’t drop in that often.

“Help you?” said the man at the counter. I asked if there was a restroom where I could refill my bottles. He pointed out the open window behind him. “Over by the corner of the house,” he said, “there’s a faucet you can use.” I thanked him, went back out and headed toward the house.

I didn’t see the dog until it came at me. It stopped at the end of its chain, trying to bark me out of its territory. “Easy boy,” I said, in my best alpha male voice. I took another step and the dog got more agitated. I heard a noise behind me and turned to see three grinning faces in the window of the shack. The man who had been behind the counter said, “He seems a might testy today. I reckon you better get your water in here.”

Even my first ride in North Carolina was memorable. On my way from Riverside, California, to Raleigh I decided to spend a night in Asheville so I could ride on the Blue Ridge Parkway the next morning. I rode a forty-mile loop with no problems but got lost after getting back to town. I stopped and was looking at the map I’d taken from the motel when a woman pulled up beside me in a pickup truck. She asked if I needed help.

I told her I couldn’t find my motel. “Well, bless your heart,” she said, pointing down the road, “it’s right over there.” That was my first southernism: bless your heart. I remember how sweet it sounded. Only later did I learn that, depending on how it’s said, it can mean something like you poor daft fool. I prefer to remember it as sweet.

Be the first to comment on "Flying Squirrels, Missing Bridges, and Other Uncommon Cycling Hazards in North Carolina"