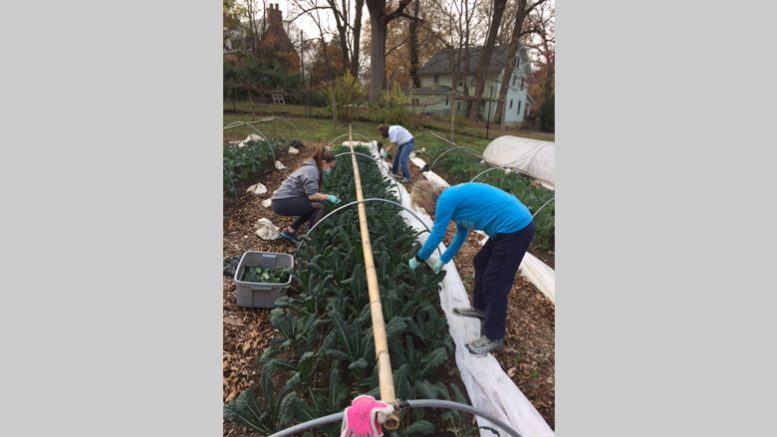 Working the crops at the Carolina Community Garden.

The first wave of housekeepers would come at 6 a.m., during the last hour of a shift cleaning UNC classrooms and dorms, and sift through the offerings waiting in 10-gallon Rubbermaid bins. Others would come a few hours later, or in the evening. But three days a week, they could count on free, fresh vegetables.

Claire Lorch, manager of the Carolina Community Garden, would watch as the university’s housekeeping staff filled their bags from the bins at the picnic table right outside the garden, always leaving enough for others. She would see their obvious enthusiasm for certain items.

Lorch intentionally grows crops that belong to the housekeepers’ native cultures but that may not be available at local grocery stores. Along with the typical summer crops of tomatoes, peppers and cucumbers, Lorch also grows snake gourds, kohlrabi, Chinese cabbage, Thai peppers and more. She has even grown chipilín, a leafy green native to Central America, from seeds shared with her by a housekeeper from Guatemala. A bed of hakurei turnips share a row with Chinese cabbage. Photo by Claire Lorch.

Lorch and a swarm of volunteers tend the soil in the lot on Wilson Street in Chapel Hill three days per week, year-round. They harvest seasonal plantings for the housekeepers, low-wage workers who sometimes don’t have enough fresh food for themselves and their families.

She misses them now. These days, Lorch delivers produce to the housekeeping center where the workers can pick them up. But still — even from a distance, even in a pandemic, and even without the 10-year anniversary celebration that would have been planned for March — the garden means more than food.

“I think people recognize that it provides so much more,” Lorch said, “in terms of community, in terms of growing things sustainably, improving the health of people.”

In 2009, during the Great Recession, some UNC staff at the lower end of the pay scale found new difficulty feeding their families. The idea to start a food bank came up at a meeting of the Employee Forum, a peer-elected group of UNC employees that advocates for their needs.

Lorch, at the time the associate director of the Carolina Center for Public Service, heard the idea to start a food bank from a colleague. It soon morphed into a pitch for a community garden, and her boss, seeing Lorch’s enthusiasm, let her get started on the project during her work time. Lorch has worked full-time for the garden ever since.

Things fell into place. Lorch found helpers — she said there was no trouble finding people excited about the idea — and land. The director of the center said she could use the vacant lot across the street that the university had recently purchased.

Called the Carolina Campus Community Garden (the “campus” was later dropped) the land now covers one-third of an acre. It became an engagement program of the NC Botanical Garden, offering workshops and teaching volunteers.

But at the beginning, the primary mission was to feed people (a lot of people: more than 400 employees make up the UNC housekeeping staff). Lorch couldn’t predict how the garden would create so many educational opportunities, as well as a community and a place of beauty and respite.

“Honestly, when we just started organizing it, I don’t think any of us had any idea what it would turn out to be,” Lorch said. “We just thought this made sense.”

When Kenneth Davis saw the persimmons that came out of the garden, he didn’t know what they were.

A 28-year housekeeping employee, he has been training coordinator since May. Davis is also the point of contact between Lorch and the housekeepers.

“It’s definitely something I’m not used to seeing,” he said. “But the employees, definitely from the Asian countries, they know what it is.”

About 60 percent of the 475-person staff are from Burma. Others hail from Korea, parts of Africa, Mexico and Guatemala. Davis said the vast majority go to the garden, like he has for the past five or more years, and that it is a blessing.

“For them to be able to come to work and receive something to take home, to cook, even if it only amounts to one meal, that’s one meal someone may not have, or that’s maybe one extra meal for the next day for their families and children,” Davis said.

Lorch and the eclectic group of workers make that happen.

On any given workday, depending on the season, volunteers plant, water, weed and process compost. The garden has neat rows and mulch pathways, everything labeled with hand-painted signs. During the winter, the workers drape opaque white plastic tarps over semi-circular supports and cover the crops. On a pandemic workday, volunteers use the hands-free sink Lorch’s husband built to prevent spreading germs as much as possible. They empty compost from the hands-free donation bins and work it into their 11 compost piles.

In the past, 20 or more high school and college students and local retirees might have come. Now, 15 is the limit for volunteers; everyone must sign up in advance, wear masks and stay six feet apart.

The masking is good for upholding public health guidelines but bad for recognizing fellow volunteers. UNC junior Becca Beechhold began volunteering in July, with the pandemic in full swing. She says she doesn’t know what anyone looks like except for what she’s seen on their social media, which not everyone uses.

“If someone takes their mask off to distance from me and drink some water, and I catch a glimpse of their face, I’m like ‘I literally did not think you would look like that at all,’” she laughed.

Despite not knowing each others’ faces, they’ve gotten to know each others’ lives. Beechhold said ever since her mom got injured in an accident, people always ask how she’s doing. Though they don’t know her, they care.

Some volunteers have been working the garden since the beginning. Some are students who have graduated but still live in the area. There is a military couple learning skills to use on their own farm; high school students earning service hours; medical students.

The diverse mix is something Beechhold and Lorch appreciate, especially now, when safe and organic socializing is scarce.

“Even though we have to keep six feet apart right now, I think people are really appreciative of having social contact, especially safe social contact,” Lorch said. “That’s been a really nice plus, and I think it’s great to have people from different walks of life.”

As a social media intern, Beechhold and another intern interview volunteers and share their stories online, as well as post photos of work days and produce on Instagram and Facebook. It helps that Beechhold is majoring in environmental studies.

“It surrounds my interests of being outside and working at the garden, so it was something I could be passionate about posting for,” she said.

Beyond learning those skills, Beechhold loves helping people get fresh produce. And she appreciates Lorch’s thoughtfulness.

Pre-COVID, the garden also hosted cooking demonstrations. Chefs volunteering their time would prepare tasty, easy, nutritious dishes at the produce distributions and give out samples and recipes to the housekeepers.

Especially throughout the pandemic, the food has been appreciated. Just recently, though, the garden volunteers covered the beds for the winter. Lorch said at this point, they are just trying to keep things alive.

The garden has plenty of upsides, but also challenges, like pests who invade the crops. Lorch keeps working, though.

“I’ve just come to accept that I can’t control it all,” she said. “We have to learn to live with fire ants. Squirrels are going to eat our tomatoes, but we’re going to do the best we can.”

Community members can donate compost (no compostable takeout containers, to-go cups, utensils or compostable bags) in the hands-free bins by the Carolina Community Garden on Wilson Street. Anyone interested in volunteering can find more information about sign-ups and required forms at https://ncbg.unc.edu/outreach/cccg/workdays.

Council’s Vote on Aura Will Leave a Legacy

Provide Equitable Access to Our Forests and Natural Areas

Be the first to comment on "For Housekeepers, a Garden of Delights"