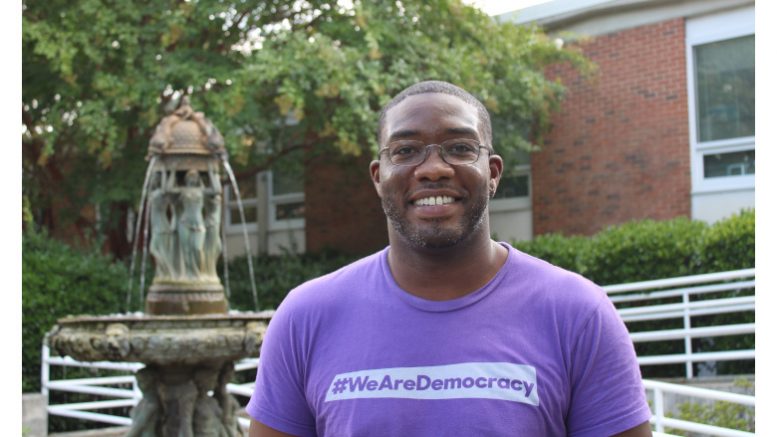 Editor’s Note: This is the second in a four-part series during the month of September on affordable housing in the town of Carrboro. To read Part 1, click here.

“For me, I have lived it. It is personal,” said Quinton Harper, 37, chairman of the Affordable Housing Advisory Commission in Carrboro, in an exclusive interview with The Local Reporter (TLR).

Harper’s first experience in the area was living as an undergraduate at UNC in 2003. Harper chose to stay, like many students, and moved to Carrboro in 2009.

He spent his first four years as a server at Elmo’s in the Carr Mill Mall. He relied on public transportation to navigate across the Triangle. He survived on wages and tips as a full-time server and paid rent in the Carrboro apartment where he still lives—only now, his rent has doubled.

“I watched my neighborhood change in composition. It went from living near co-workers who were servers and waitstaff, folks in law enforcement, nurses and teachers, and young working-class Black, Brown, and White families to folks that could afford to pay over $1,000 or more in rent,” he said.

He decided to get involved in affordable housing as he watched “the composition and racial makeup of my immediate community change as folks were being priced out and unable to afford to live in Carrboro anymore.”

Recognizing his passion, Carrboro City Council Member Barbara Foushee asked him to become part of the Carrboro Affordable Housing Advisory Commission, and he has served as chair since 2017. Foushee said, “I recognized him as a born community organizer. He (Harper) knows how to connect with people and will get the job done.”

“This (Carrboro) is a community where we have individuals who make below 30% AMI, including folks with no income, fixed income, and low income. They have the greatest need in our community, evidenced by the biggest gap. But it is an area where the city government can impact the greatest number of people,” said Harper.

Harper said that while many people support affordable housing, some only do until they say, “not in my backyard.”

“I have a couple of choice words to [give] those well-intentioned folks, starting with history,” said Harper.

“There were indigenous Americans who were here and were stewards of this land. We can talk about the tribes who used this land and made provisions for everyone to have housing. The first and second things I would tell them are that this land you own, or say you own, was stolen. Housing is not a privilege. It’s a right,” Harper stated.

Harper’s comments have basis in the Land Acknowledgement statement of the UNC Gillings School of Public Health. The Gillings statement provides a mini-education on North Carolina and Chapel Hill history and demographics to those who might not be aware:

North Carolina is home to the Occhaneechi, Lumbee, Coharie, Haliwa-Saponi, Eastern Band of Cherokee, Meherrin, Tuscarora, Sappony, and Waccamaw-Siouan Nations, along with many other indigenous peoples living in both tribal homeland and urban settings. North Carolina has the largest Indigenous population east of the Mississippi River.

Harper is correct that there exists “not in my backyard” mentality—commonly known by the acronym “NIMBY,” which applies to not only housing but also other types of development that residents don’t want located in or near their neighborhoods. Usually, the development is something other people or the government favors, or it might be something the residents would support if located elsewhere. The connotation is usually negative and can be an unfair characterization for those with a reasonable objection (like siting an incinerator beside a residential neighborhood). Based on studies, many characterizations of affordable housing are also unfair.

For example, many who resist affordable housing in their neighborhoods believe such development will bring high density, crime and a drop in their property values. Numerous recent studies contradict these assumptions.

An article in Bloomberg reported in May this year that a new Urban Institute study examined low-income housing in Alexandria, Virginia, finding that homes in proximity to affordable housing saw increases to property values “by a small but still significant 0.9%.”

The City of Mission Viejo in California issued a report that debunks a number of myths about affordable housing. One myth, that high-density and affordable housing increase crime is responded to with the argument that the “design and use of public spaces have a far more significant effect on crime than density or income levels.”

Further, the University of California-Irvine (UCI) School of Social Ecology published information about UCI’s Livable City Lab (LCL) study, released in early June 2022, that looked at the effects of affordable housing on crime and property values in Orange County, California, using data from a six-year period. LCL found that affordable housing decreases crime and brought increases to property values–$16,000 for added home value, according to the school’s website.

The loss of generational wealth and a need to listen

The last thing Harper wants to tell objectors to affordable housing is that many Americans were excluded from economic opportunities to create generational wealth. Homeownership is regarded as a key to building that wealth.

“That is history, period. Until we acknowledge the history of this land in a way that allows us to heal, we can’t get on the same page,” Harper said.

“Come and listen to the stories of folks who have had to sleep in their cars or the elements. Talk to the people staying at one of the community shelters. There is so much division in our community. We have an extraordinary opportunity to come together to create and build a community that we can envision. That is huge!” he added.

During the interview, Harper struggled to choke back emotion, saying, “We need to listen to those most impacted and come together to figure out a solution and not be part of the problem that holds it back.”

Next week, Part 3 gives insight into the upcoming “House Us Now” march for affordable housing, which is scheduled for September 25, 2022, from 2-5 p.m.

Be the first to comment on "For Quinton Harper, Affordable Housing in Carrboro is Personal"