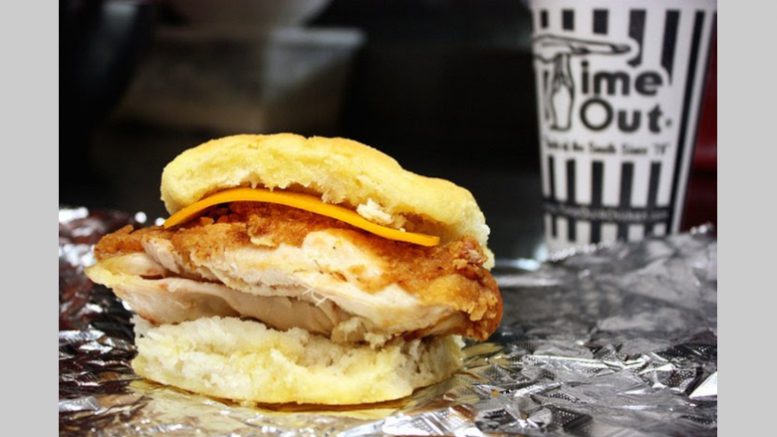 Growing up a Midwestern girl, biscuits were not the stars of our breakfast table. A biscuit was like a baguette: an almost foreign food. We didn’t write love letters to the biscuit. We didn’t have a restaurant on every other corner advertising hot and fluffy biscuits. I don’t recall a fast food restaurant dedicated to the biscuit and I certainly don’t recall any serious traffic jams like the ones that happen at a certain biscuit drive-through on Franklin Street. (We won’t name names, Sunrise Biscuits). All that has changed. I moved a few hundred miles south and now biscuits are as much a part of my life as sweet tea, basketball, and that crazy aunt who lives in the attic crocheting throw pillows for Rhett Butler.

In Biscuits: A Savor the South Cookbook, food writer Belinda Ellis recalls falling in love with biscuits while attending Carson-Newman College. She writes, a “talented cook in the college cafeteria was so adept at rolling, folding, and baking these tender and flaky simple angel biscuits,” that she later launched a search to find the biscuit’s origin. Though claimed by many from Emory Thompson to Martha White, the real origin is lost to history. What remains, though, is a time-tested recipe for a delicious biscuit. “Biscuits remind people of home and of people you love. Good biscuits don’t travel well and start to go downhill the moment they’re taken out of the oven. So, for most of us, biscuits were very special. And as a southerner, they represented a type of bounty that didn’t require wealth. I always say that flavor is the gift of poverty,” says Kevin Callaghan, Acme Restaurant.

“My grandfather would make biscuits every Saturday morning — he called them “left-handed” biscuits — and with the last bit of dough scrap he’d make an odd shaped biscuit called the “ho-back.” It was short for “hold back.” And after breakfast, he’d wrap the “ho-back” in a paper towel and take it with him as he went to work in his large (3-4 acre) vegetable garden. Then, somewhere close to 11:00 am, he’d take a break and eat that biscuit. It was the biscuit that he “held back” to get him through his day. I’m sure that it was an old tradition that he learned from his father. So, biscuits remind you that you’re from a place and a certain lineage. I, for one, can’t eat a biscuit and not think of my grandfather.” The history of the biscuit itself is tasty. The word comes from the Latin “panis biscoctus,” meaning “twice baked.” It’s no coincidence then that a biscuit is similar to biscotti, cookies that actually are baked twice. Soldiers in ancient Rome received “hard biscuits” in their rations. They had no leavening agent or fat in them, so they lasted a long time. In fact, hard biscuits of some type were the original MREs (meals-ready-to-eat) of military personnel for centuries. “Hardtack,” “ship’s biscuit,” “sea biscuit,” and “pilot bread” are all in the biscuit family.

It wasn’t until several 19th-century innovations came along that we got what’s now recognized as the Southern biscuit. Better flour mills — most of them in the Midwestern U.S. —increased wheat production and dropped the price of flour enough that poor Southerners could also afford to buy it. The development of chemical leavening agents, baking soda and baking powder in particular, helped biscuits reach new heights. If you happen to be in Orange County, just make it a point to stop at one of the many local restaurants that feature biscuits. And trust us, there’s plenty.

The biscuit has come a long way since ancient Rome, and an argument might be made that after centuries of culinary evolution it has become its most perfect version of itself, right here, right now. There may be better reasons to live in Orange County, or to visit, but none that are quite as light and fluffy. Where to Find Biscuits