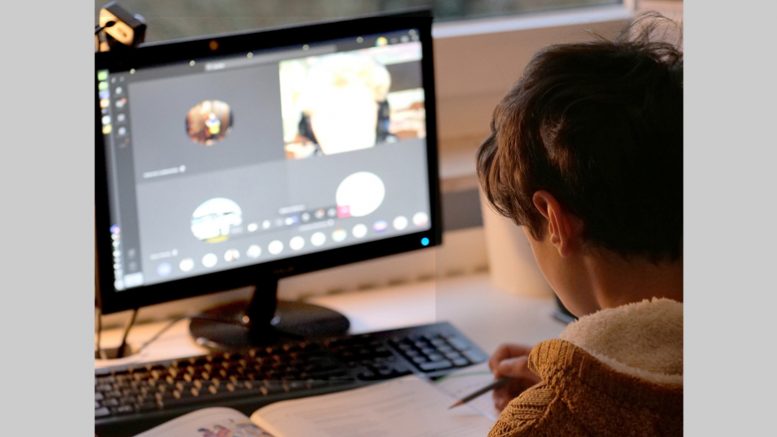 Adjusting to remote learning has been a continual challenge for local students, educators and parents. But for students with intellectual and physical disabilities the adjustment has been even more difficult.

“Students, as a whole, have been impacted, obviously, within remote [learning], but when you’re talking about students who have intellectual and physical disabilities you’re talking about students who may need additional support, additional task analysis for understanding how to log on to a computer, how to get on a specific program,” said Lessley Saenz-Mader, executive director of Chapel Hill-Carrboro schools’ exceptional children program.

Saenz-Mader said the primary challenge of remote learning for students with disabilities is the lack of additional, professional support they normally receive in the classroom. Plus, the students have different communication and motor needs and there’s difficulty — for everyone involved —in navigating so many computer programs and systems on a daily basis.

Saenz-Mader said the impact remote learning has on a particular student and family can vary greatly.

It depends “on the needs of the student,” she said. “It’s also based on the needs of the family within the home because we are turning, now, to our families to be that support for students to be able to log on. So, what that looks like, as well, can be a potential impact on our students.”

And on the parents, too. “We’ve had some parents who have said, ‘Hey, we’re enjoying this remote learning, it’s working well,’” Saenz-Mader said. Other parents have given the school system “significant feedback that this is not working.”

The students and their parents

One CHCCS parent of a child with disabilities, Sherry Attaway, said even with her and her husband’s substantial participation with their son’s remote learning, the situation has been stressful and they’ve been unsuccessful in educating and keeping their child on pace.

Attaway’s son has now returned to in-person learning, but was working remotely from March to December. She feels remote learning didn’t work for her son, who required significant assistance.

“It had to be my husband and I [educating our son], and we both work full time remotely, so that was a huge, huge challenge, but we tried to make it work,” Attaway said.

She noted that her son did fine with remote learning for about two or three months and, during that span, she and her husband were able to keep him in a routine and pretty well engaged.

“Then we started to see his behaviors change,” said Attaway. “It went from fun to boring, and then from boring to depressive, and then depressive to angry.”

By September, Attaway and her husband began noticing their son showing signs of “full-on depression,” along with becoming very angry. “[He was] hitting us, hitting the screen, running away, meltdowns, it was very, very challenging.”

“I would say that [lack of social interaction] would be one third of the problem,” Attaway said. “The other thirds would be lack of routine and it’s hard for our kids to distinguish between parents and implementor of education, and seeing him angry at me and his dad and having to enforce the learning education was hard for him; he couldn’t make that distinction.”

Jennifer Pfaltzgraff is the executive director of the Arc of the Triangle, which serves children and adults with a variety of intellectual and developmental disabilities. She also has a son with disabilities who requires full assistance with remote learning.

Pfaltzgraff said the method has been ineffective in keeping her child engaged and learning.

“My husband and I are lucky enough we can both work from home, we have that privilege, and so we take turns. We wheel him up to the dining room table and log on, we mute and unmute for him,” Pfaltzgraff said. “He’s non-verbal and can click to respond to the teacher so they ask yes or no questions, and sometimes we have to prompt him. But it is full on, we’re doing nothing but supporting him during that hour, hour and a half time period.”

Lisa Broome has two children with disabilities in CHCCS, and also has been highly involved in assisting her children during this time. She said remote learning has had both positive and negative effects on her children.

Bur “they’re also much more stressed in other ways,” Broome said. “Especially at the beginning, their schedule was all abruptly changed, everything was different [and] their expectations all had to be modified.”

Remote learning also has been hard on Broome herself. “It’s incredibly stressful, especially with a child who needs constant supervision, or needs a lot more than is provided through a screen. Managing those needs on top of the things I daily have to do, it’s hard.”

Both Attaway and Pfaltzgraff said their children haven’t been progressing academically at all. Attaway said her son regressed “significantly” during remote learning, in addition to not learning anything new. Just making it through the day was an almost insurmountable challenge, she said.

“Even if he was sitting there for 10 or 15 minutes, he was not looking at the screen, he was fidgeting or trying to play with stuff,” Attaway said. “It was just constantly trying to keep him attending and participating. It’s just unfortunate, zero learning.”

For Pfaltzgraff’s son, “some days, he’s engaged and happy to hear his classmates’ voices and happy to hear his teacher and the teaching assistants,” she said. “Some days, the material is hard for him to understand online so we just chalk those days up as, ‘We attended school and, really, didn’t get anything out of it.’”

For Broome, remote learning has been an opportunity for her children to “learn a lot of things that aren’t necessarily academic.” But she feels remote learning would be more effective if students with disabilities were just auditing their classes because they would “not be as worried about the assignment part and the grade part.”

Even some parents who are able to regularly assist with remote learning find they are simply not equipped to succeed in educating their children with disabilities on their own.

The teachers and the schools

The transition to remote learning also has been hard on teachers who work with students who have disabilities, like Katie Kiehle, an exceptional children’s teacher at Cameron Park Elementary School in Hillsborough.

Kiehle’s entire daily routine, as well as how she interacts with her students and their families, has dramatically changed since March. Before the pandemic, she used to visit each of her students in their homes at least once a week. She would bring them markers or a whiteboard to help them learn and be more successful in their classroom.

Kiehle remembers crying in March when the district made the announcement that all schooling would be done online for the remainder of the school year. With her students online, it was difficult for her to navigate all the technology and programs she’s required to master. If it weren’t for her students being tech-savvy, she said, she’d be lost.

Kiehle is now teaching both remotely and in-person; she’s in the classroom four days a week, since her school began sending EC students who were really struggling with remote learning back to school.

She continues to believe there’s just something lacking in learning that isn’t in a physical classroom. This is why, Kiehle said, communication between teachers and parents has been even more vital during remote learning.

“I have several parents that used not say anything to me — at least, now, they let me know when a child has reached their limit or they’re frustrated about something or they’re just not getting it,” Kiehle said. “Because, without seeing kids, you just can’t walk around and check on their work. You can tell by kids’ faces what they’re getting and not getting.”

Remote learning’s impact on students and their families depends on a multitude of factors, she said.

“Some kids, they love it. I’ve had students with autism that [remote learning] is so for them; they don’t have to interact with anybody, they do what they need to do, they get their work done,” said Kiehle. “I have other kids who are just really missing teachers, they don’t get it, socially and emotionally I think it’s really taken a toll, not to be able to play with other kids.”

Sitting in front of a screen, with no real social interaction, for most of the day is extremely difficult for some students to do, she said. In addition, students and parents are also having to navigate so many computer programs it can become overwhelming. Kiehle also noted that some homes are simply too chaotic for children to truly learn.

“For a lot of kids, there’s no structure at home, so they’re not progressing very well at all because it’s so chaotic that they’re not getting online,” Kiehle said.

Throughout the pandemic and the switch to remote learning, TEACCH — a UNC-based program which provides services for people with autism across the state — has been working with teachers.

CHCCS also has launched several initiatives designed to assist students with disabilities and their families with remote learning. The district focused on ensuring technology was getting to homes, Saenz-Mader said.

If families didn’t have Wi-Fi connections, the district provided them hotspots. The district updated and distributed devices as well. If students required assistive technology and equipment for remote learning, the district made it available. The district also has worked to maintain constant communication with families explaining how to use the technology provided.

Additionally, CHCCS has entered into a contract with Presence Learning, “which is an online platform that affords us the ability to do teleassessments and teletherapy and it provides resources for our staff,” Saenz-Mader said.

Eigenrauch noted that remote learning is “a double-edged sword,” as it can easily isolate a person with autism, creating issues for them when the pandemic is over, making the transition back to in-person learning just as challenging as the move to remote.

“We’re also not facilitating the skills that are going to be necessary once COVID starts to go away,” Eigenrauch said. “Now these folks are going to be expected to integrate back into the community and into their classrooms and that’s going to be a big change — change in routine, change in expectation, and that can really throw a wrench in the lives of some of our folks.”

But for Attaway’s son, the return to the classroom has, literally, been life-changing.

“They’re still adapting and they’re going to struggle when it turns to a transition again,” Broome said. “I’m dreading it, it’s going to be awful no matter what.”

Be the first to comment on "For Those with Disabilities, Remote Learning Means More Challenges"